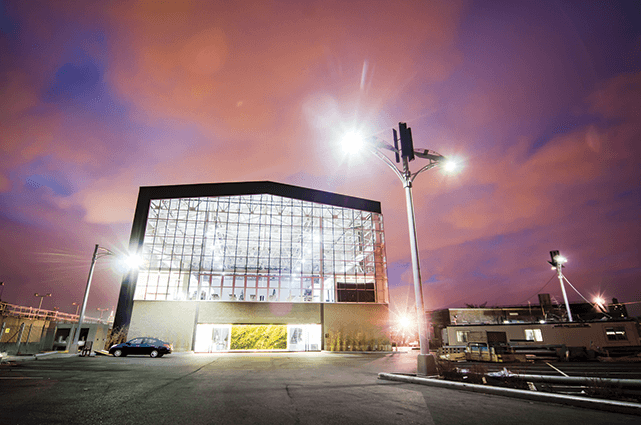 After several hours of driving on a dark rural highway, the first distant glimpse of a roadside streetlight can be a sight for sore eyes. It’s also a reminder to urban and suburban dwellers that we too often take these beacons of safety for granted.

Looking out the window of an airplane, streetlights automatically reveal the design and character of a city. They are a kind of municipal fingerprint, and no two are alike.

What they do have in common is that they all run on electricity – and municipalities that pay the bills every year certainly don’t take that for granted. There are an estimated 35 million streetlights across Canada and the United States and together they consume enough electricity to power four million homes.

Los Angeles, for example, had been paying more than $20 million for its fleet of 220,000 streetlights. As part of a massive cost-cutting effort, it decided in 2009 to launch what was then the largest LED streetlight project in North America.

So far, the City of Angels has converted about 140,000 of those streetlights to LED units. The move has paid off. Energy use dropped 63 per cent and the municipality was able to cut its bill by $7 million a year. That excludes the $2.5 million annually it now avoids in maintenance costs, reflecting the fact that LED lamps rarely fail and last three to four times longer than sodium lamps typically used today.

“The product is now mature, it works, it lasts, people are happy with it, and prices have come down,” said Philip Jessup, director of LightSavers Canada, an initiative of the Canadian Urban Institute in Toronto.

Despite this win-win story, Jessup explained, the vast majority of municipalities still haven’t committed to the switch. In the U.S., an estimated 10 to 13 per cent of streetlights are now using LED lamps. Canada, by comparison, is lagging at just under 5 per cent.

This poses a challenge for LightSavers, which wants to see one million or 37 per cent of all streetlights in Canada switched over to LED by 2016. It has found that municipalities, while they generally “get” the benefits of LED streetlights, remain reluctant to commit the upfront capital required to do the retrofits – particularly when most city budgets these days are strained.

In search of strategies to break through this barrier, LightSavers and Corporate Knights convened a small group of municipal, financial, energy and technology experts to explore alternative financing options that might accelerate the deployment of LED street lighting without weighing down municipal balance sheets.

Kerry Wilson, director of commercial strategies for RealTerm Energy, an energy services company, or ESCO, said acceptance of and interest in LED streetlights has shifted considerably over the past three years as municipalities become more educated about the technology and its potential benefits.

As an ESCO, RealTerm offers to pay for and install LED street lighting as part of an energy performance contract. The municipality doesn’t have to worry about providing capital for the project upfront, such as through debt financing. Instead, it makes regular payments to RealTerm based on its energy savings.

Wilson said RealTerm already has 17 performance contracts in place and more than 60 proposals under consideration. “Once you start getting the ball rolling, it catches on quickly.”

The ESCO model, while not new as it applies to energy-efficiency retrofits in buildings, is a fairly recent development for streetlight deployment. The size of the opportunity, however, is attracting interest from non-traditional ESCOs such as lighting giant Philips and from traditional ESCOs such as Johnson Controls, which has some performance contracts in the U.S. and is slowly trying to break into the Canadian market. Many cities remain cautious and talks are slower than anticipated, but Brian Del Vecchio, senior account executive at Johnson Controls, said a positive sign is that negotiations are getting more “rigorous” and “detailed.”

Why the municipal skittishness?

“The perception is that it’s still a cowboy market out there,” said Cynthia Robertson, a principal at Parkridge Consulting. In other words, the relative newness of LED street lamps raises questions about quality control, speed of technology advancement and a lack of market standards.

Will LED lamps for streetlights perform much better five years from now, or be replaced by new technology, or drop considerably in price? Which LED lamp suppliers can be trusted? For some city managers, it may be safer to play wait-and-see.

“If you’re a streetlight manager and your city street lighting already works, why change anything?” said Jessup, playing devil’s advocate during the discussion.

And what about other municipal stakeholders – city treasurers, chief operating officers, the local utility and city councillors? Each represents a different interest or need in the community. The challenge is getting them all on the same page. The good news is that it’s on the radar. In January, the U.S. Conference of Mayors released a survey of 300 mayors, 82 per cent of whom said switching city lighting to LED technology was a high priority.

Not surprisingly, 84 per cent cited budget constraints as the biggest barrier.

It doesn’t have to be.