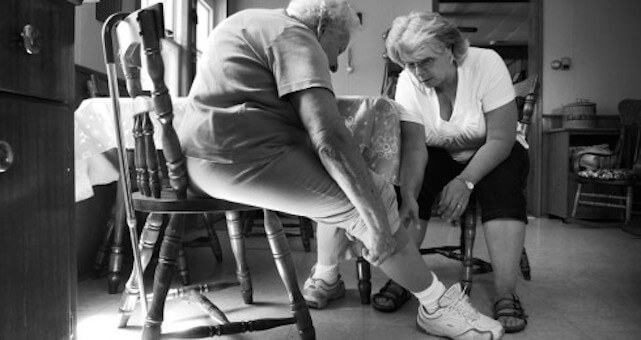 Universal health care is part of Canada’s identity, but the lack of care in our rural and Aboriginal communities leaves some feeling un-Canadian.

“I was a family physician in rural practice for over 20 years and twice I had individuals who chose to go blind rather than travel to the big city to access an eye specialist,” says Dr. Roger Strasser, founding dean of the Northern Ontario School of Medicine. “So you can hardly say the system is meeting the needs of those patients.”

Those patients were scared of leaving their community, he explains. “If you’ve never been to a big city, it’s really terrifying. People who grow up in rural areas feel comfortable there. They want to access health care [close to home].”

That’s not easy when almost a third of Canadians live in rural areas with access to one tenth of our country’s physicians. The result: rural Canadians have more illnesses and a shorter life expectancy than their urban peers. Specifically, First Nations men and women live seven and five years less, respectively, than other Canadians.

And things are about to get worse. In July 2010, the Canadian Journal of Rural Medicine (CJRM) found one in seven rural physicians are planning to move from their communities within the next two years.

Despite the fact that Canada’s urban population is growing and small towns are disappearing, rural and Aboriginal health care should not fall further through the cracks. Beyond the fact that all Canadians deserve the same access to care, rural Canada generates the country’s fuel and food supply, and as arctic sovereignty issues heat up, access to health care in the far north will be critical to keeping a population settled there.

Before nurse practitioner Renate Bennett’s small forestry community of Caledonia, N.S. banded together eight years ago to build a local health care facility, she was working out of a small trailer without heat or running water. We’re not wealthy, she says, “but people were able to find $100 because they were committed enough to having this building.” Bennett knows some communities are not as fortunate. “Sooner or later, if people can’t access primary health care in a rural community, they’re going to end up in a larger centre.”

Frieda Prince, social development worker for the Lower Similkameen Indian Band in the Okanagan Valley of B.C., agrees. “All those people in Vancouver, Toronto, and Montreal come from somewhere, usually the smaller communities. When you look at your Downtown Eastside, wherever that is in whatever community you’re in, that’s usually made up of people migrating to the larger centres from [rural] communities.”

Instead of promoting a diaspora from rural to urban centres, Dr. Strasser says the best health care solutions come from the rural communities themselves. “There is a tendency to take models from the city and somehow try to miniaturize them. Worst case scenario, it leads to a collapse of the health service.”

The urban formula for determining where to locate care facilities based on population density is one example of this collapse. When applied to rural communities, facilities are often concentrated in one area, which means surrounding districts have to travel far distances. Instead, Dr. Strasser says planners should look at integrated health services, which mix emergency, short-term, and long-term care beds in the same facility. But that means having versatile practitioners.

That isolation presents both challenges and opportunities. With fewer health providers, people get overworked and don’t last very long, says Dr. Michael Jong, Associate Professor with the Northern Family Medicine Education Program (NorFam) at Memorial University. But once there is a “reasonable” number of peers, the broad scope of practice available to doctors means they’ll stay, says the CJRM’s July survey. And there are other exciting benefits.

“[Health providers] live in the community they serve, so they have the opportunity to assist the community as a whole in improving their health,” says Dr. Strasser. “In a small town in rural Australia, the local doctor was so effective in presenting the message of the relationship between red meat, cholesterol, and heart disease the butcher shop started selling fish.”

To achieve such effectiveness, the NorFam program at Memorial trains physicians in rural areas, for rural areas. At the Northern Ontario School of Medicine in Sudbury, first-year students spend four weeks living and learning in Aboriginal communities.

That type of immersion, Dr. Jong says, is the key to successful retention. Dr. Jong came to rural Labrador from Malaysia to practice medicine in the late 1970s and having seen many doctors come and go, he has a deep understanding of the issues with a transient provider population.

“You cannot parachute someone into the community [to help you and] solve your problems. Residents say, ‘You need to be around for at least a couple of years before we trust you.’ Most people hate retelling their medical issues over and over again,” he says.

With programs that expose students to the issues, the fear of working in a rural environment is eliminated. “Most of the doctors here in Labrador were trained here, except the old guys like me.”

And rural and Aboriginal students often prefer staying close to home. The University of Lethbridge has a Support Program for Aboriginal Nursing Students (SPANS) located relatively close to the Blood and Piikani reserves. It prepares and supports First Nations, Métis, and Inuit students throughout the four-year Bachelor of Nursing Program by incorporating mentorship and the wisdom of elders. Before the program there were at most four aboriginal nursing students, and now there are 60, says Dr. Judith Kulig, SPANS’ coordinator.

A varied approach is needed not just for education, but for the doctor-patient relationship.

“We need to allow physicians a multiplicity of ways of dealing with their patients,” says Dr. Diane de Camps Meschino, a staff psychiatrist at Women’s College Hospital. One of her psychiatric patients lives two hours away and has three kids. Despite icy roads in winter, Dr. Meschino can’t treat her by telephone. “A system like that is revolting.”

While Dr. Meschino treats some patients by phone and doesn’t get paid, she criticizes, “How is a system [like] that sustainable?” Increased use of technology would help both patients and other doctors, especially those in remote areas who can’t just go next door to ask their colleague a question.

“While I was on holiday, I had a call from a doctor in a small town in Ontario, and an email from a physician in Newfoundland [looking for specialized expert advice],” she says. “If I can give that kind of information in five minutes to a doctor, it means [neither the doctor nor] the patient has to travel, and the patient gets timely care.”

Some options include telehealth programs, which use video conferencing to connect doctors with each other and with patients. There is also email consultation. In his town of Happy Valley-Goose Bay, Dr. Jong says they are piloting remote-controlled robots for surgeries.

But we need to start with the basics. “Canada has among the lowest rate of electronic health records in primary care in the industrialized world,” says Dr. Danielle Martin, Chair of Canadian Doctors for Medicare. “That’s a real barrier to patient safety,” she says, since documentation of prescriptions, allergies, and other medical history is crucial to proper treatment.

Technology alone won’t solve the problem. A different view of what it means to be healthy, however, will improve health care. The Partners in Community Collaboration (PICC) committee in Kelowna, B.C. help remove barriers to health care for the “disenfranchised” by having frontline staff discuss the specific needs of individuals in their community. While developed for the homeless, the program deals with more than just primary health care, bringing together community partners such as mental health, addiction, employment, and legal services.

Adam Wylie, chair of the PICC committee, explains the social determinants of health with an analogy. If someone has one bee sting, they’ll take care of it. If they have ten bee stings, would you have motivation to treat all of them? No, he says. We have to address multiple issues, because addressing one won’t make a difference. “[Otherwise] the issue or the pain’s still there. It still hurts.”

Dr. Kulig agrees. “If they don’t have a chance for a job or an education, you can tell them all you want about eating properly, but there are too many other things for them to deal with.”

Unfortunately, the Lower Similkameen Indian Band in B.C. hasn’t seen the benefits of this new system, says Eliza Terbasket, health and social team leader of the Band. While she supports the tripartite concept, “There is a lack of communication. Our community hasn’t been informed. When we start setting up organizations provincially, generally the small bands like ours get the tail end.”

Dr. Strasser says there’s a common expectation the Ministry of Health will do everything without the people being directly involved.

Community collaboration and empowerment is instrumental to increasing access to health in rural and Aboriginal communities. Is Canada’s health care system designed to do this? Most practitioners would say no.

This article has been nominated for a RNAO Award for Excellence in Health-Care Reporting.

The article photo is courtesy of the Frontline Health Story Project, the goal of which is to increase awareness of the innovative ways that practitioners are helping to improve the capacity to serve Canadians facing barriers to healthcare. See more at www.frontlinehealth.ca