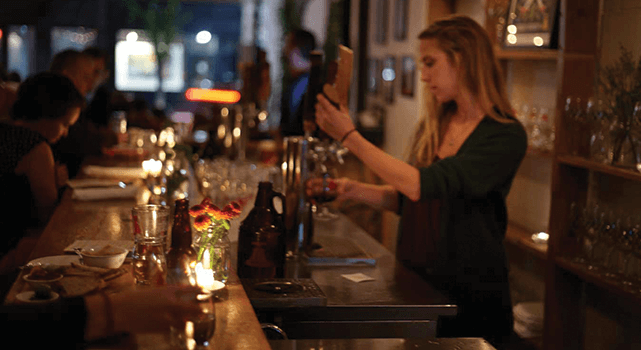 A busy night at Bellwoods Brewery in Toronto, one of the first to sign up with Wagemark

On a sunny Thursday afternoon in September, Bellwoods Brewery is not yet full of customers, but it is buzzing with activity. Every employee in sight is moving, tending to tasks in the restaurant, retail and brew spaces.

Given the casual dress code, the big black dog resting in front of the bar and the beautiful interior of glass, wood and steel, the brewery appears a nice place to work. So do the other boutique businesses on this trendy stretch of Toronto’s Ossington Avenue. What makes the brewery different is the formal commitment made to its workforce as one of the original signees of Wagemark – a recently launched international standard for workplace wage ratios.

To receive Wagemark certification, an organization’s top-paid employee cannot make more than eight times the average compensation of the bottom 10 per cent. The foundation of research the non-profit builds on suggests the wider the income gap, the poorer the performance of both companies and countries. But will the idea sell?

“We actually are pro-capitalist,” says Peter MacLeod, Wagemark’s founder and interim executive director. “We just want everybody to enjoy the fruits of their productivity. It’s about competitiveness. It’s about business, sustainability, the durability, the resilience of an organization.”

MacLeod argues places such as Scandinavia and Japan are examples for the rest of the world. “You look to societies with low income disparities and you see that they not only outperform us around [quality of life], they also outperform us on some important economic indicators, whether it’s productivity, whether it’s a social-economic indicator, like generational mobility.”

In a report published by the University of California, Berkeley, in September, economist Emmanuel Saez found that post-recession income gains made in the U.S. from 2009 to 2012 were 31.4 per cent for the top 1 per cent compared to 0.4 per cent for the remainder. Bloomberg reported in April that J.C. Penney’s CEO had been paid 1,795 times as much as the average company employee.

MacLeod says Wagemark isn’t about “naming and shaming” companies and their leaders, nor does he expect such companies to sign up. But J.C. Penney could learn something from the fallout after its CEO’s golden parachute, when the company’s share price slid, MacLeod points out. “The company has rarely been in a weaker position. They can take whatever lesson from that they like.”

Income disparity has received increased political attention in the United States lately. The Securities and Exchange Commission (SEC) is preparing to vote on a proposal that will require companies to reveal the pay gap between CEO compensation and the median compensation of their workforce, based on a sample of employees. The proposal is a mandate of the 2010 Dodd-Frank Act and expected to pass with three out of five SEC votes; two Democratic and one independent versus two Republican.

While not as extreme as those in the U.S., pay gaps in Canada have also increased. According to the Canadian Centre for Policy Alternatives, the 50 highest paid CEOs made over 200 times as much as the average Canadian wage in 2011, compared to 85 times in 1995.

Wagemark, which is Toronto-based, was inspired in part by The Spirit Level, a book written by British epidemiologists Kate Pickett and Richard Wilkinson. The two researchers argue that equal societies are better for all who live in them. Wilkinson has served as an advisor to Wagemark. “It’s at work we have most to do with each other, yet it’s at work we are most divided by hierarchy. We can change that,” says Wilkinson on the phone from London. “Work ought to be the place where we can get our sense of purpose and our sense of self-worth and appreciation by others.”

Taking a step back, Wilkinson argues, “The big, long-term objective for progressive politics, as well as dealing with sustainability, has got to be to democratize our economic institutions, to extend democracy by pursuing all forms of economic democracy. I do regard the bonus culture as an indication of a lack of any democratic constraint on people at the top. They think they can do just what they like.”

When The Spirit Level was published in 2009, it was predictably lauded by the left and lambasted by the right. As Pickett and Wilkinson write in a postscript to their 2010 edition, the criticism has often been political, not scientific. They maintain that mental health, physical health, obesity, educational performance, teenage births, violence, social mobility and imprisonment all relate to levels of inequality.

The authors dedicate a chapter of their book to the connection between inequality and sustainability. “Given what inequality does to a society, and particularly how it heightens competitive consumption, it looks not only as if the two are complementary, but also that governments may be unable to make big enough cuts in carbon emissions without also reducing inequality,” they write. Interestingly, according to data cited in The Spirit Level, business leaders in more equal countries tend to be more positive towards public policy that complies with international environmental agreements than their peers in more unequal countries.

MacLeod says he doesn’t expect every company to agree with the worldview Wagemark represents, but he’s not necessarily going after the Fortune 500. His focus instead is on medium-sized organizations that have hundreds of employees, not tens of thousands; that have tens and hundreds of millions of dollars in revenue, not billions; and that have strong corporate cultures where people still have a sense of being a part of the same organization.

He also doesn’t expect Wagemark to be a silver bullet for workplace inequality, but more of a long-term contribution to a broader movement for societal equality. Included in this movement are Pickett and Wilkinson’s organization, the Equality Trust, and other national and international advocacy groups and policy initiatives, such as those pushing for increases to minimum wage or “living wage” levels.

It’s a work in progress, and adjustments could become necessary in some scenarios. Take outsourcing. What if a profitable company meets Wagemark’s standard within its own facilities, but not when taking into account the factory workers who produce the company’s product through a contractual arrangement?

“We can’t write a licence that prohibits explicitly all sorts of business activities,” says MacLeod. “But to be perfectly frank, I don’t think those kinds of businesses are going to be attracted to Wagemark initially.”

Some big American companies, on the other hand, have demonstrated a commitment to maintaining modest wage gaps relative to others in their industries since long before Wagemark. Costco is one frequently cited example. In the midst of the economic downturn, while competitors struggled and tightened belts, Costco raised employee salaries, which are over double minimum wage – yet the company has thrived. According to Businessweek, the company plans on expanding internationally, opening outlets in France, Spain, Japan, Taiwan and South Korea over the next five years.

But falling within Wagemark’s 8:1 pay ratio will be a huge challenge for big companies, more so in specific sectors that have a proportionately higher number of low-skilled, lower-paid workers. According to data compiled by Corporate Knights Capital – which looks at CEO compensation relative to a company’s average worker pay (as opposed to an average of the bottom 10 per cent) – the global average ratio is 133:1 and 113:1 for consumer discretionary and consumer staples, respectively.

At 139:1, Costco is above the global average, according to U.S. union federation AFL-CIO. But compared to Walmart, which comes in at 597:1, Costco still looks like a champion of the people. On the other hand, ratios for the high-skilled utilities and health care sectors are 57:1 and 53:1, respectively.

“We completely accept that in different industries it could be more difficult,” says MacLeod. “We’re starting with 8:1, and it’s our hope and intention over the next two years to bring on several thousand organizations. On the issue of how we evolve the standard, it’s a question we’ll have to pose to our membership, so stayed tuned.”

Already, Wagemark is preparing this fall to unveil its Tier 2 certification designed to appeal more to larger companies. The pay ratio standards would range from 9:1 to 30:1 depending on a company’s revenues. The higher the revenues the wider the allowable pay gap.

Small and medium-sized companies, meanwhile, continue to sign up to Wagemark. Mike Clark, co-owner of Bellwoods Brewery, doesn’t see the current standard too much of a burden. As one of the more than 20 companies that have so far joined, the brewery is aiming to have a pay gap of between 3:1 and 4:1 over the next few years. Today, it has 35 employees, but Clark has plans to expand. Complying with Wagemark, he says, shows employees they are being treated fairly and with respect, and helps retain them.

“It just makes me feel so good about the people that I’m working for and the fact that they’re conscious of building a team that’s going to progress together,” says Bellwoods staffer Kristi Porter.