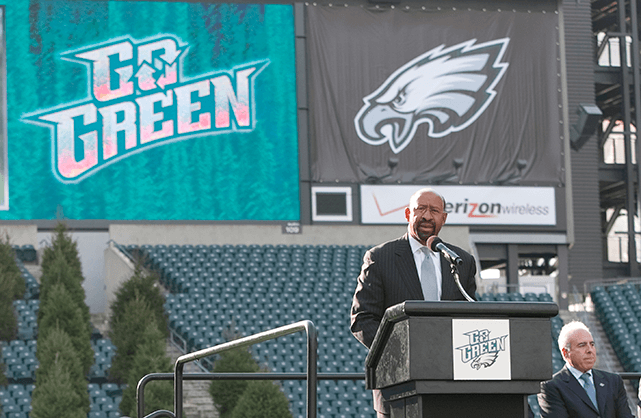 Michael Nutter couldn’t have picked a worse time to win the keys to city hall. In late 2007, after 14 years as a city councilman, Nutter was elected as Philadelphia’s 125th mayor. His victory was built in part on a campaign promise to make his town in Pennsylvania “the greenest city in America.”Yet mere months after he took office, Wall Street imploded, sparking global financial crisis and the worst economic downturn since the Great Depression. Philadelphia’s fiscal outlook plummeted from surplus to billions in deficit, leaving Nutter facing painful choices.Rather than retreat on his green agenda, however, Nutter looked to sustainability to help right the city’s finances. In 2009, he unveiled Greenworks Philadelphia, an ambitious blueprint to help the city run more efficiently, with less pollution, and become healthier all while using less energy and money to do so. “Cities are incubators of innovation,” said Nutter in an interview with Corporate Knights. “Congress can’t figure out energy or climate policy. Breaking new ground is happening at the city level because this is where it has to.”Philadelphia’s eco-planners developed the program by auditing a vast array of urban metrics – from the amount residents walked to the availability of fresh, whole food. Then, they cast the data into the future, assessing how the city might look if “business as usual” continued. Finally, they combed through the numbers to set tough but achievable goals touching on dozen of actions. The final report organized the targets under 15 broad categories.As an integrated vision for urban sustainability, Greenworks won plaudits for its unusually ambitious timeline. When it comes to energy or climate goals, it’s not unusual for governments to set targets a decade or more into the future. But distant goals can erode political will, Nutter notes, so his team agreed to peg the bulk of the plan’s targets to 2015.Three years in, the results are showing up on Philadelphia’s city streets, and on its bottom line. Some of the programs are helping the city’s day-to-day operating budget. Consider recycling: The city saw rates soar to 18.9 per cent in 2011, more than triple the benchmark rate of 5.4 per cent in 2006.The city made recycling both easier and more rewarding. Recycling days were shifted to the same day as regular garbage pickup and doubled in frequency. The city also eased the sorting hassle by expanding the types of plastic that could be recycled to numbers 1 through 7. Most U.S. cities accept just a few of those types.The shift is turning a cost into a revenue source. Each ton of trash diverted to recycling bins not only saves about $68 in landfill costs, it generates more than $50 from the sale of bulk recycling material.Other efforts promise to deliver huge, long-term capital savings. For example, Philadelphia was facing a $10-billion tab for new sewage facilities to prevent storm water from tainting regional waterways. Instead of a costly infrastructure fix, though, the city is spending $2 billion over 25 years on a multifaceted solution that restores the urban landscape’s ability to absorb rainfall.Additional trees, parks and urban green space, all of which act as natural sponges, top the city’s to-do list. For buildings, the tricks include rain barrels and green roofs to collect and hold rainfall. The city is building out permeable road surfaces that let drops of rain soak slowly into the ground, rather than race down to storm sewers. “We recognized we could save money, not dig up half the town, and improve our parks and green spaces,” says Nutter.The mayor’s green team tapped private partners to help multiply public efforts. To help cut citywide energy use, city programs aim to reinsulate homes and recoat black-tar roofs – which become oven-like hotspots in the summer – with cool, reflective white coatings. To spark homeowners’ competitive impulse, the city teamed up with Dow Chemical on the “Coolest Block” contest. Residents competed to win energy-saving cool roofs, insulation and other efficiency upgrades donated by Dow to their entire block. Said the mayor: “We can’t do this alone.”For Nutter, the city’s green programs are delivering growing rewards, too. Philadelphia closed a multi-billion dollar budget gap as Greenworks took root. In its 2011 self-assessment, the city found that 135 of its initial 151 green goals have been completed or are underway. That quick success, Nutter says, has fired ambitions, spurring the addition of dozens more new eco-goals.Perhaps the greatest measure of success for Nutter is re-election. He won a second term in November, assuring he’ll be there to push Greenworks through its 2015 deadline, and beyond.