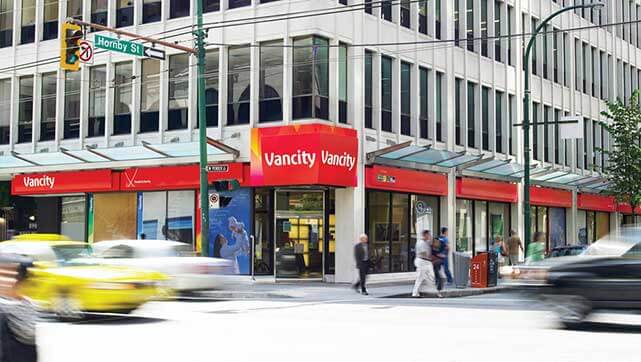 Tamara Vrooman has a drop-dead response to a question about gender diversity at Vancity, Canada’s biggest credit union. Noting that women make up more than half of Vancity’s top management and seven of its nine board members, Vrooman, its chief executive, chuckles: “We are the only board in Canada looking for a few good men.”

Vancity scored above 75 per cent in all 12 categories used to compile the rankings, except for water use, employee turnover, taxes and pension benefits. (Full disclosure: Vancity is a minority investor in Corporate Knights. It played no role in compiling the rankings.)

Vancity – its full name is Vancouver City Savings Credit Union – is a rare beast in the corporate world. Size and growth (though not profits) take a backseat to what it calls “values-based” or ethical banking. Its goal is, in its words, “to integrate social, environmental and economic factors into all aspects of our business, and collaborate with others to build healthy communities.”

Owned by its 515,000 members, Vancity is dwarfed by the big Canadian shareholder-owned banks. Its assets of $19.8 billion amount to less than 2 per cent of the balance sheet of Royal Bank of Canada, the country’s largest financial institution. It has fewer than 2,600 employees, and just 59 branches in Vancouver, provincial capital Victoria and British Columbia’s Fraser Valley.

“A lot of smaller local banks see Vancity very much as a role model,” says Peter Blom, chief executive of Netherlands-based Triodos Bank and chair of the Global Alliance for Banking on Values, of which Vancity is a member.

The alliance’s 28 members, mostly cooperative and community banks and credit unions, promote sustainable banking as a way of improving their communities and society at large. Vrooman, who was B.C.’s deputy finance minister from 2004 to 2007, chairs the alliance’s North American chapter.

“What’s so interesting about Vancity,” Blom says, “is that they are in a transition from a local credit union that did a lot of good work to a modern credit union that incorporates the environment and broader social issues into their banking space. That’s quite unique.”

Vrooman’s efforts to immerse senior staff in social responsibility and environmentally sound banking “is a real source of inspiration to the CEOs of other, smaller organizations,” Blom says.

He cites a small bank in Melbourne, Australia, that is modelling itself on the Canadian credit union. Vancity also helps train young “social bankers” from other countries.

Even as many of the world’s biggest banks find themselves in the political crosshairs, Vrooman sees the financial services industry as a powerful force for good in society. “The allocation of capital – what kind of firm, what kind of person does and doesn’t get access to credit – is probably the single most positive force in creating the future society that we want,” she says.

“It’s pretty difficult to create the kind of society that most people say they want if we’re not connecting capital to the things that matter to them – the sustainability of the planet, how welcoming and inclusive a community is, the business and corporate environment, the role of education and health and democracy, the inclusion and reconciliation for indigenous people…all those things.”

The credit union’s drive to burnish its do-good credentials takes many forms. For example, the influx of refugees to Canada has been a golden opportunity to pursue both social responsibility and the bottom line.

Vancity offers to open bank accounts for government-assisted refugees within two weeks of them stepping off the plane. Last fall, in anticipation of the arrival of thousands of Syrians, it expanded the number of branches that process refugee accounts from one to five.

Its members can also obtain interest-free, seven-year loans of up to $50,000 to provide accommodation for a refugee.

On other fronts, Vancity claims to be the biggest organization in Canada to stick to a “living wage” policy for its employees; in other words, pay that significantly exceeds the legal minimum wage and is sufficient to meet basic living needs.

Management compensation hinges partly on meeting social responsibility goals. “Finance has no greater weighting than those criteria,” Vrooman says. “In fact, it’s only one of five.”

Vancity has attracted 30,000 new members a year over the past three to four years. As Vrooman sees it, more and more people are saying “hey, I care what happens to my money and what my money is used for, and I understand what role my community cooperative financial institution can play in that.”

As a result, she says, “we think we can do even more. A lot of the digital technology around social media and social networking works well with a values-based financial institution that’s open and transparent and inclusive. We think technology can extend our business model.”

She declines to disclose projects currently in the pipeline, but points to Vancity’s alternative to payday loans as an example of where the credit union is heading.

Customers with low credit scores or no credit history can obtain a Vancity “fair and fast loan” of between $100 and $2,500 within an hour at an annual interest rate of 19 per cent, compared to the typical 60 per cent favoured by the industry. Vancity arranged almost 1,000 of these loans last year.

“Being able to offer an ethical, transparent alternative to payday lending that at the same time provides capacity building and financial literacy online is definitely a place where we want to go,” Vrooman says. “We think we can reach more people if we do it that way.”