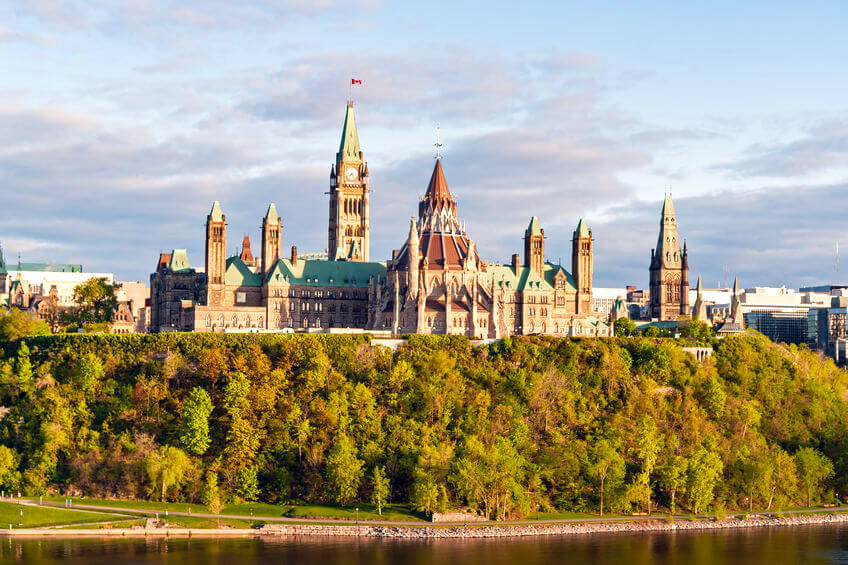 With the world facing a climate emergency, a business-backed “clean capitalism” group is urging Canada to go on a war footing with a massive investment plan that would drive economy-wide innovation and energy efficiency and dramatically reduce greenhouse gas emissions.

The plan, put forward by the Council for Clean Capitalism, calls for the federal government to invest $50 billion per year over six years in key sectors: buildings, transportation, electricity, heavy industry, and oil and gas.

It came in the waning days of a federal election campaign in which the climate crisis has been a central issue, and in which all leading parties have pledged to take action to reduce emissions, though with vast difference in terms of policy ambition.

The Capital Plan for Clean Prosperity represents the kind of government efforts that are typically employed only in time of a major war or economic crisis, and its proponents argue that such an economy-wide intervention is precisely what is required to prepare Canada for the rapid transition to a low-carbon economy that will be essential to avert the worst impacts of climate change.

Under the council’s proposal, grants would be made available to oil and gas and heavy industry companies that could guarantee that the investments would result in a 50% reduction in either greenhouse gas emissions or energy use in the targeted operations. Similarly, developers and contractors would receive grants for zero-carbon-ready buildings, whether through new construction or retrofits, while fleet operators, including transit authorities, would receive grants to cover the incremental costs of upgrading new vehicle purchases to be zero-emissions vehicles (ZEV). Funds would also be made available to cover the full cost of interprovincial high-voltage, direct-current (HVDC) power lines.

The council argues that the increased debt incurred by Ottawa would be offset by massive job creation and higher tax revenues that would result from the increased business activity.

All told, the investment effort would reduce greenhouse gas emissions (GHGs) by 139 megatonnes annually by 2025, taking Canada 70% of the way to its Paris treaty commitment, according to modelling done by Corporate Knights, an affiliate of the Council for Clean Capitalism. Under the Paris Agreement, Canada committed to reduce emissions to 30% below 2005 levels by 2030 and is now being urged by the Intergovernmental Panel on Climate Change to be even more ambitious.

The GHG reductions would be in addition to the impact of measures adopted by federal and provincial governments over the past four years, which Environment Canada has projected would leave Canada some 78 megatonnes above its target of 513 megatonnes in 2030.

“The Capital Plan for Clean Prosperity demonstrates that transitioning to a low-carbon economy is less about ‘shutting down’ than it is about retooling, diversifying and growing,” said council coordinator Toby Heaps, who is also the publisher of Corporate Knights magazine. He added that the investment benefits are especially significant in the oil sector, “which offers the biggest carbon savings bang for buck, and where production costs per barrel will be critical to remaining competitive.” The plan estimates that an investment of $21 billion over six years would reduce GHGs by 30 megatonnes per year by 2025, saving the sector $10 billion in energy costs over the same time frame.

Any effort to implement such a plan would run into significant challenges. It would add $300 billion to the federal debt over six years, represent a massive government intervention in the economy, and effectively subsidize the country’s oil and gas producers despite calls from clean energy advocates to eliminate fossil fuel subsidies.

However, when outlining the plan for the council, Heaps said that the urgent nature of the climate crisis justifies an unprecedented response from government.

“Stimulus of this scale would be justified by the economic benefits that accrue from a once-in-a-generation energy transition and by the need to respond to the climate emergency,” he said.

The plan would add $50 billion annually to the federal deficit for six years – roughly 2% of gross domestic product (GDP) – and drive the federal debt-to-GDP ratio up by 10 percentage points, to 44%. The Conservative government under Stephen Harper posted a deficit of $55.6 billion in the depths of the Great Recession in 2009/10, or 3.4% of GDP, but cut the shortfall in half within two years.

“Stimulus of this scale would be justified by the economic benefits that accrue from a once-in-a-generation energy transition and by the need to respond to the climate emergency.”

A recent Scotiabank report suggested that the federal government should be prepared to inject as much as $100 billion of stimulus, or 4% of GDP, into the economy if the global economy stalls as expected.

Heaps acknowledges that it would be challenging to justify a plan that essentially pays corporate Canada to make the reductions that climate crisis advocates argue companies should be doing on their own. However, such investments would pay enormous dividends by preparing the Canadian economy for a low-carbon future, boosting economic activity and jobs, and achieving dramatic reductions in GHG emissions, he said in an interview.

Canada’s response to the looming climate emergency has been a key issue in the election campaign that resulted in a Liberal minority government.

The Conservatives have campaigned against a carbon tax and have offered only modest alternatives, including a two-year subsidy for home renovations, to reduce emissions.

The Green Party occupies the other end of the spectrum from the Conservatives, with ambitious plans for retrofitting buildings, prohibiting the sale of gasoline- or diesel-powered automobiles by 2030 and stopping approvals for new oil and gas projects and slowly decreasing existing operations.

Liberal leader Justin Trudeau has promised to exceed Canada’s 2030 emissions target, but the party has not laid out a clear path to do so. The Liberals point to existing commitments that include major multiyear spending for green infrastructure such as public transit while offering, for example, a new policy of home energy retrofit loans to be financed by the Canada Mortgage and Housing Corporation.

The New Democrats – who may hold a balance of power in a minority government after the election – and the Green Party have both campaigned on a pledge to end subsidies and tax breaks for the oil and gas sector. The plan by the Council for Clean Capitalism would, in contrast, provide the industry – and the oil sands sector in particular – with annual multibillion-dollar subsidies over the next six years.

The Council for Clean Capitalism plan would allocate $21 billion to oil and gas companies to invest in technology that reduces their emissions. Heaps said that the oil industry offers the biggest GHG reductions per dollar invested of any sector and must be part of the solution if Canada is to have a shot at meeting its 2030 emission reduction goals.

The industry, which accounted for 27% of Canada’s emissions in 2017, is already spending more than $1 billion annually on efforts that reduce GHGs. However, it is typically only pursuing operational changes that improve energy efficiency and yield attractive rates of return due to lower operating costs. Suncor Energy, for example, announced last month that it will invest $1.4 billion to replace two coke-fired boilers with natural-gas-fired co-generation units that will produce steam for its oil sands operations near Fort McMurray and provide 800 megawatts of power for the grid. The system will reduce GHGs from steam production at the site by 25% (or 2.5 megatonnes per year) while providing a “robust” rate of return to be a “significant contributor to the company’s goal of growing incremental free funds flow by $2 billion by 2023,” the company said.

Oil industry veteran Gord Lambert said there are significant opportunities to reduce emissions throughout the industry, from the extraction of bitumen to the refining of crude into petroleum products, but companies need to see reasonable payback before making the spending commitments. “Lots of ideas are available to the sector, but the [lengthy] time-to-payout is making investment difficult,” said Lambert, a Suncor retiree who now serves as CEO of Alberta’s energy regulator and as a board member at Alberta Innovates, a provincial agency that provides financial support for innovation.

The province helps finance technological innovation with revenues generated by a provincial carbon levy that was first put in place by a Conservative government and was increased by the New Democrats after they took power in 2015. However, environmental campaigners argue the federal government should not be subsidizing the oil industry, even if such spending reduces emissions per barrel. “We need to get off oil, not reduce upstream emissions per barrel,” Greenpeace campaigner Keith Stewart said. “Public funds should be focused on a wholesale transition off fossil fuels.”

Perhaps a less politically divisive area of focus in the capital plan is its call for investment in energy efficiency and electrification in the buildings and transport sectors, which together account for over a third of the country’s emissions.

Each of the national parties has some form of energy retrofit policy in their platform, ranging from a refundable tax credit worth up to $3,800 offered by the Conservatives to an ambitious plan to retrofit every building in the country by 2030 put forward by the Greens.

The Capital Plan for Clean Prosperity urges Ottawa to allocate $78 billion over six years to cover the incremental costs of making new buildings zero-carbon ready and to retrofit buildings in Canada. It estimates that the industry is prepared to invest $795 billion between 2020 and 2025, and the incremental 10% provided by Ottawa to cover costs of upgrades to new buildings and retrofits would be enough to bring a quarter of all commercial and residential buildings to a zero-carbon-ready standard by the end of 2025. (Zero-carbon ready suggests a property owner can reduce a building’s energy consumption to the point that any emissions from fossil fuels are offset by onsite renewable energy.)

The investment in the building sector would provide the largest boost to economic growth, the council said. The investment program would also lower costs for building owners, whether commercial developers or homeowners, and generate tax revenues for government to help offset the spending.

The targets for building retrofits (3% of total building stock per year) are consistent with the most aggressive plans seen in Europe and in U.S. states like New York and Connecticut, said Brendan Haley, policy director for Ottawa-based advocacy group Efficiency Canada.

However, there is a stubborn resistance among builders and owners to adopt the off-the-shelf technology available to dramatically reduce energy consumption in buildings. Energy efficiency technologies can require significant upfront costs that are only recouped over time. There are also barriers such as the need for management time and attention to decide what technologies to embrace, the reluctance of building operators to incorporate new systems, and the tendency of business executives to want to invest in revenue-generating assets rather than cost-saving operational changes. Those hurdles could be effectively overcome through the provision of “free money” from the federal government that would generate broad economic and environmental benefits for the country, Haley said.

The Capital Plan for Clean Prosperity represents a radical departure for a country that has long struggled to meet its climate commitments and has battled over carbon taxes and the fate of oil pipelines. It also represents an opportunity for whatever party is in power after the Oct. 21 election to demonstrate a vision on the climate crisis that goes beyond “business as usual.”

Shawn McCarthy is an independent writer and senior counsel with Sussex Strategy Group.