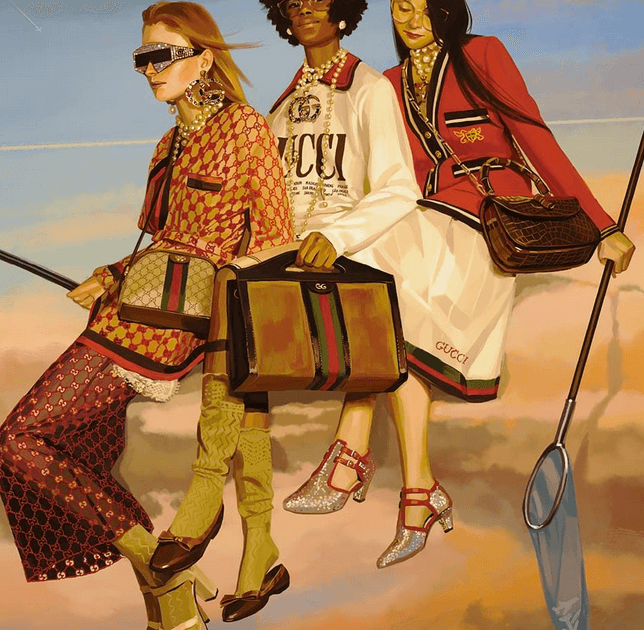 Neon green, according to Vogue.com, is “winter’s hottest trend.” But while the fashion world fleetingly embraces this season’s blinding shade of chartreuse, one major international apparel corporation has been betting on the staying power of a deeper shade of green. Yes, the gang behind Gucci is making high heels with bio plastics, weaving abandoned fishing nets into men’s jackets and cladding metallic accessories with recycled palladium from old catalytic converters used in medical appliances.

It hasn’t quite been advertised in lights, but Kering – the Paris-based group behind Gucci, Yves Saint Laurent, Alexander McQueen and other luxury brands – has been quietly pioneering environmental and social initiatives behind the scenes for several years now. So quietly, in fact, that in 2015, the Washington Post slagged the company for not being public enough and failing to leverage its global influence to help make going green sexy, the way Tesla has for electric cars.

Fast forward to the present and Kering and its biggest profit-driver, Gucci (now beloved by Millennials and rappers alike), have been coming out of the closet as sustainability champs. “We have been working on sustainability for so long and we realized at one point that our actions needed to be better understood within and outside the company,” Gucci president and CEO Marco Bizzarri told Women’s Wear Daily during the launch of Gucci’s new online platform, Gucci Equilibrium – designed to “connect people, planet and purpose.”

There’s no denying luxury fashion hasn’t exactly been synonymous with ecological sensitivity. Exotic animal skin handbags, fur-trimmed ensembles and questionably-mined bling have dominated haute couture runways and boutiques since the dawn of luxury fashion houses. Not that luxury and sustainability are inherently at odds. The Italian authors of the book Sustainable Luxury Brands: Evidence from Research and Implications for Managers argue that “craftsmanship, preservation of artisan skills, product quality and durability” give brands like Yves Saint Laurent and Gucci greener bones than fast fashion’s disposable knock-offs.

By the time fashion lovers started adding up the true cost of their clothing after Bangladesh’s Rana Plaza garment factory collapse killed 1,138 garment workers back in 2013, Kering was already doing its own number crunching. That same year it released its first Environmental Profit & Loss Report, attaching a monetary cost to its air emissions, land use, water consumption/pollution, waste and greenhouse gases (notably, Kering’s GHGs largely came from the cattle farming involved in its leather). In 2013, the environmental price tag for making Kering’s multi-brand luxury goods rang in at US$817 million.

The latest EP&L numbers from its 2017 report are pegged at €482 million (roughly US$620 million). Kering’s aiming to slash its environmental footprint by 40 per cent across its entire supply chain by 2025, as well as halve its GHGs by then (a critical move, considering a 2018 Quantis report found that the apparel and footwear industry jointly account for 8.1 per cent of global climate impacts).

To get there, Kering’s chief sustainability officer Marie-Claire Daveu has admitted the company’s going to have to find “some really disruptive innovations.” So far that’s involved hemming executive bonuses to sustainability gains (their board, by the way, has the highest percentage of women of Corporate Knights’ Global 100 list), as well as funding innovation labs and change-making startups – and open sourcing the innovations they develop. It all rolls into Kering’s status as 2019’s most sustainable publicly-traded fashion corporation and the world’s second most sustainable corporation overall on the Global 100 (up from 47th place last year).

But while fashion commentators applaud Kering’s progressive governance, top-drawer policy targets and moves like their recent ban on fur, UK-based nonprofit Fashion Revolution’s 2018 Transparency Index still critiques Gucci (the only Kering company evaluated) for its opaqueness. To fully fuel the fashion revolution, founder, Carry Somers, tells Corporate Knights that Kering needs to root out potential shadows in its supply chain by going public with its supplier list the way, say, H&M and formerly Kering-owned Puma have.

Nonetheless, Fashion Revolution says that, more than most luxury brands, Gucci is moving in the right direction. Kering’s moves to date certainly signal that luxury goods don’t need to be cloaked in secrecy to thrive.