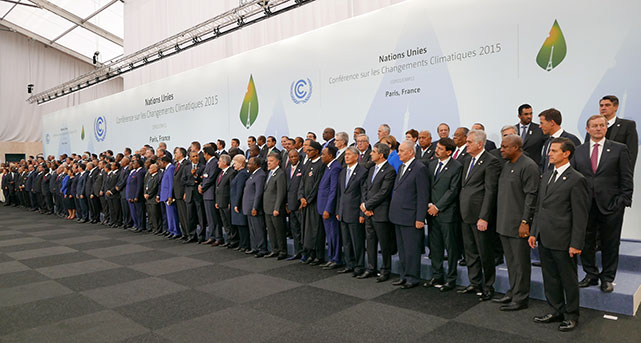 The Paris Agreement on mitigating climate change seeks to limit emissions with the goal of holding the increase in the global average temperature to well below 2 C above preindustrial levels while also pursuing efforts to limit the temperature increase to 1.5 C.

As with any complicated international deal, the devil is in the language. While it acknowledges that developing countries will take longer to peak their greenhouse gas emissions, it agrees that these reductions will be made on the basis of equity.

This phrasing, “basis of equity,” probably means very different things to different parties to the agreement. The Kyoto Protocol adopted in 1997 was based on the principle of “common but differentiated responsibility,” which is to say that developed countries, with their disproportionate historic responsibility for past emissions, were expected to cut sooner and deeper. This same language is still used in the Paris Agreement reached last year.

Since Kyoto, the world has changed. Rising emissions and climbing temperatures over the subsequent 18 years mean that the permissible carbon budget for 2 C has become much smaller. Reductions in emissions are now all the more urgent and, were they to be shouldered by developed countries alone, the required rates of decrease would be unrealistically rapid.

Also, the world no longer divides up so neatly between high-emitting developed countries and low-emitting developing countries. In particular, China now has higher per-capita emissions than the European Union, and the highest emissions of any country. China’s rapidly growing middle class now rivals that of the United States or Europe, and many millions of the most prosperous Chinese have carbon footprints well above the North American average.

“Rich people in poor countries shouldn’t be able to hide behind the poor people in those countries,” Robert Socolow, co-director of Princeton’s Carbon Mitigation Initiative, explained in a recent interview.

The concept of common but differentiated responsibility no longer breaks out so easily along international borders.

Researcher Lucas Chancel and well-known economist and author Thomas Piketty of the Paris School of Economics have produced a thorough analysis of the distribution of wealth and carbon emissions in the world. Their work, Carbon and Inequality: from Kyoto to Paris is freely available online.

The thresholds to get into the wealthier global ranks are lower than many people might suppose. For example: if individuals in North America earned more than $16,300 (U.S.) annually, they would be among the global 10 per cent; incomes above $82,526 would put them in the global 1 per cent. The majority of North Americans are members of the wealthy 10 per cent and entry into the 1 per cent club can be achieved by earning a good professional salary. 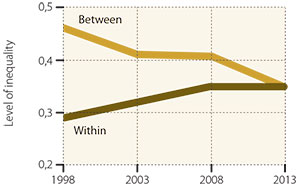 World carbon emission inequalities within and between country importance as measured by the Theil index.

Chancel and Piketty show that there is now more inequality of emissions within countries than between them. As large developing nations start to catch up with the rich economies, reducing the gap between nation states, inequality within countries is increasing. Quite clearly, Kyoto-era assumptions about who needs to reduce emissions need to be reframed.

There are two main ways of dividing up the remaining safe carbon budget. The most obvious, equity, means dividing up what we can safely emit in the future on an equal per-capita basis. The other, inertia, entails distributing future emissions according to how fast countries are currently consuming carbon. If every country from now on reduced their emissions from present levels by the same percentage per year, that would put the world on an inertia emissions reduction pathway (see Peters et al. 2015).

Not surprisingly, the developed countries don’t like the equity method and the developing countries don’t care for inertia. For example, under equity, North America would have 5 per cent of the remaining carbon budget and India, 25 per cent. Under inertia, North Americans would get 19 per cent and Indians, 7 per cent. Equity sharing would impose an unrealistic reduction pathway that would have North America producing zero emissions in 15 years. Inertia sharing would leave India and other poor countries with a small allowance that would prevent development, which goes against any notion of fairness.

For the poorest countries, even equity sharing appears unjust. No account is taken of the early start that developed nations like Britain had. Early developers industrialized in the late eighteenth century or early nineteenth centuries and their per-capita emissions over more than 200 years add up to more than those of the late developers, like China. Because carbon dioxide accumulates in the atmosphere and some part of it stays there essentially forever, historic emissions matter more than current emission rates. On a historic equity basis, the rich countries’ future allowances would be smaller than under equity; in some cases they might even be negative.

The world’s 40 per cent middle class naturally aspire to live like the comfortable 10 per cent do today. And the 50 per cent have-nots would be much better off if they could advance to the current consumption levels of the global middle class. The growth of China over a generation has shown that such a level of economic growth is technically possible. However, even if the future rich emit no more than they do today, this would entail tripling global emissions. Everyone now agrees that this can’t be allowed to happen.

It is going to be expensive for the rich countries to decarbonize their economies and equally expensive for the poor to develop their economies with low-carbon energy. And the poor, of course, have little money to start with. Help is needed and the Paris Agreement recognized this with developed countries pledging $100 billion (U.S.) per year to developing nations to finance clean energy and other initiatives.

This is laudable in principle, but there are several major shortcomings:

Despite the agreement made in Paris, it is going to be very difficult to limit global warming to well below 2 C above pre-industrial levels. The voluntary GHG-reduction pledges that have been made will have to be tightened significantly and developing countries will need to peak their emissions much sooner than currently planned. Large amounts of financial assistance from rich countries could help facilitate this, but what has been offered so far is too little and too late.

Roughly speaking, the long-term trend of surface temperatures puts us today at 1 C above pre-industrial temperatures. Recent spikes due to the massive El Niño event in the equatorial Pacific have temporarily pushed surface temperature anomalies close to 1.5 C above pre-industrial levels – the aspirational goal mentioned in the Paris Agreement. Achieving that goal will be more than twice as hard as staying below 2 C and it would involve making sharp adjustments to rich-country lifestyles, large amounts of foreign aid and deploying carbon dioxide removal measures like bioenergy carbon capture and storage on a massive scale.

We face such hard choices and limited policy options to avoid dangerous warming in 2016 because we have squandered the 18 years since the Kyoto Accord.

Let’s hope that, in 2034, we don’t look back on Paris as another missed opportunity.