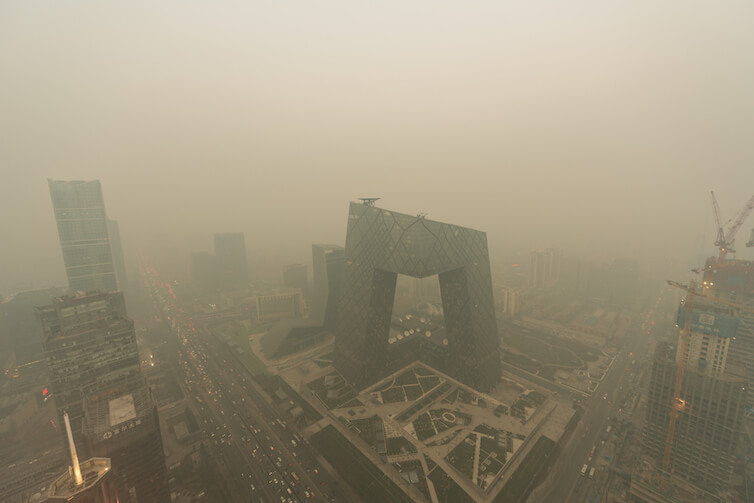 The latest report from the International Energy Agency warns that a rise in coal use is fueling a global increase in greenhouse gas emissions. The IEA called out Asia as the source of the majority of coal-fired generation. But while Beijing has garnered attention for attempting to crackdown on urban pollution from coal, China is aggressively exporting coal technology abroad.

To clean up its smoggy skies, five years ago China launched a US$120 billion war on pollution. It made headlines for reducing coal and steel production, restricted truck transportation and encouraged consumers to switch from coal heating to natural gas or electricity (4.8 million homes switched last year alone).

This week’s IEA report notes that there has been a jump of over 5% in electricity generation from coal-fired power stations in China, which “offset the impact of a decline in coal use outside of the power sector.”

Still, Beijing itself has seen a 35% decline in the concentrations of fine particulates in its skies. If these gains persist, an economist calculated last year in the New York Times, the average Chinese resident can expect to live 2.4 years longer (3.3 years longer in Beijing).

Beyond its borders, however, Chinese banks are eagerly financing factories, highways and power stations along the so-called Belt and Road corridors designed to carry Chinese trade and soft power into South Asia and Eastern Europe. In 2018, Chinese institutions provided $36 billion to fund coal plants in 27 countries – accounting for one-fourth of all coal projects under development. In many cases, Chinese money replaced funding from regional development banks scaling back their investment in coal.

In 2018, Chinese institutions provided $36 billion to fund coal plants in 27 countries – accounting for one-fourth of all coal projects under development.

As the Financial Times reports, “Chinese bankers and project planners like coal-backed projects because they are cheap.”

According to a January report from the Institute for Energy Economics and Financial Analysis (IEEFA), China’s lenders “lag their global peers in formally limiting investment in coal plants in international markets.” The report accuses the banks of “imposing stranded-asset risks on countries that will struggle to adapt as coal power becomes obsolete.”

Experts now are calling on China to stop supplying borrower states such as Bangladesh and Pakistan with dangerous and outmoded technology. As IEEFA analyst Simon Nicholas noted in the South China Morning Post, Chinese president Xi Jinping promised that the ambitious Belt and Road super-project would “achieve green and low-carbon development.”

Now, says Nicholas, “President Xi must swiftly reconcile rhetoric and reality. The consequences of a new generation of coal will be toxic for the environment, toxic for financial institutions involved, and toxic for China’s reputation.”

Some countries, including Pakistan and Malaysia, are pushing back against coal projects. This, says Nicholas, “centres around the suspicion China is providing concessional finance overseas to provide a soft landing for a dying domestic coal industry.”

By promoting the same green technologies abroad that it’s using at home, Nicholas says China could enhance its reputation as “the global renewable superpower,” and create more secure futures all along the Belt and Road. With its green knowhow, he says, China should be developing “energy infrastructure fit for the next generation, rather than one which should be consigned to the last.”

A version of this story appears in the Spring Issue of Corporate Knights.