By Dan Zilnik and Marcius Extavour
Posted November 23, 2020
By exporting low-carbon innovations, Canada can become a climate leader with a resilient economy

Last week, the federal government announced that it was tabling the Net-Zero Emissions Accountability Act in the House of Commons. The act enshrines into law the government’s goal of achieving a net-zero economy by 2050. While grand in vision, Bill C-12 is not explicitly a roadmap to achieving a net-zero economy. It creates legal accountability around reporting on Canada’s progress on the journey to net-zero. But as the fifth anniversary of the Paris Agreement approaches, Canada continues to fall behind on its targets. So how do we transition from where we are today to a position of climate leadership and economic resilience?

Does a decision on Keystone XL matter?

By Dan Zilnik and Jason Switzer
Posted August 7, 2015
Part 3: Approval of the continent’s most controversial pipeline project means little for the climate if nothing else changes.

(On Thursday, we looked at why environmentalists’ opposition to the oil sands became a symbolic, four-front battle targeted at Keystone XL. Today, in the final installment of our three-part series, we ask if the death of Keystone XL would be considered a true victory if nothing fundamental in the oil sands changes.)

By Dan Zilnik and Jason Switzer
Posted August 6, 2015
Part 2: How an otherwise ho-hum pipeline project drew the wrath of environmentalists. 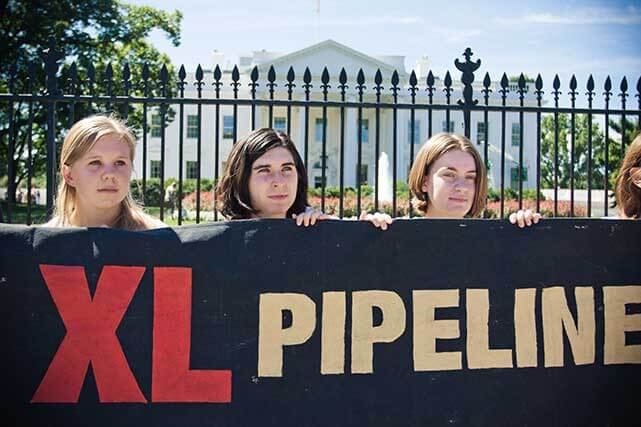 (Yesterday, we looked at how the oil sands evolved from a money-losing proposition to a lure for international investment and a reason to expand the Keystone pipeline. Today, we look at how that success sparked an unprecedented amount of well-organized environmental opposition.)

By Dan Zilnik and Jason Switzer
Posted August 5, 2015
Part 1: Why Keystone sits at the heart of this decade’s most significant battle between eco groups & fossil-fuel interests.

(The talk around Washington, D.C., these days is that U.S. President Barack Obama will soon issue his final rejection of the controversial Keystone XL pipeline project, possibly as early as this month. For environmentalists, the seven-year battle over the Keystone expansion has been a proxy for their larger war against the oil sands, which has become a symbol of climate destruction. For Alberta, it is considered an enabler of oil sands growth – a way to get more of its product to market. How did Keystone XL come to be such a lightning rod? Below is the first of a three-part series on the rapid rise and fall of Keystone XL, and what it means for the future of Canada’s oil sands sector and the global fight against climate change.)