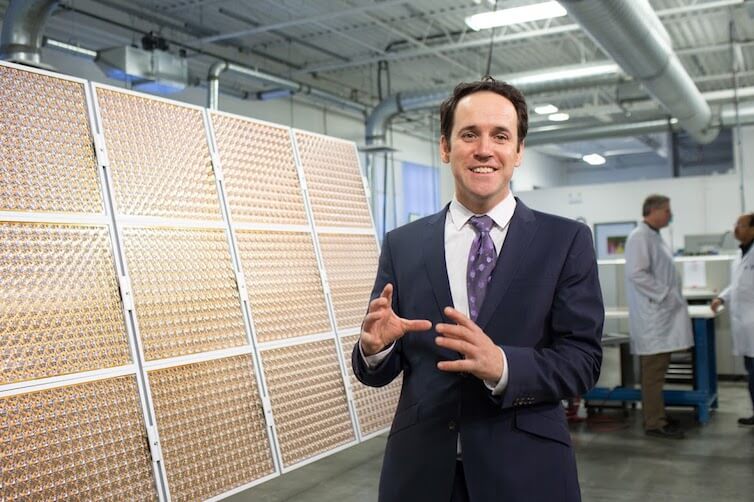 “I’ve always been an inventor,” the founder of Morgan Solar says. “My first patent I got very early in my career. It was my third day on the job. There was a problem with ‘optical noise.’ Twenty engineers were working on it. I proposed this very simple little change which would eliminate it. My colleagues told me, ‘It’s way more complicated than you think.’ But a few days later my boss said, ‘That idea you had, can you flesh it out?’ My innovation ended up going into a lot of products. The patent is still valid today.”

Morgan’s telecom days around the turn of the century were thrilling. He describes them the way atomic scientists spoke of the Manhattan Project – as the richest, most intellectually satisfying undertaking of their lives.

“We kept doing things in the lab in 2001 that were breaking all sorts of prior world records, like the fastest optical router ever made,” Morgan explains. “We were achieving speeds in terms of response times that had never been achieved before in human history. I got it into my head to just go out there and do something no one had ever done before.”

I ask him at what point engineers hit their creative peak. “The time when you invent the most stuff is when you have a lot of knowledge of the space in general but not of the specific problem,” he argues. “People tend to become experts and don’t see the forest for the trees. But when you’re brand new, you look at the problem and can come up with all sorts of new things.”

Hence, his early breakthrough. A recent university graduate, Morgan had considerable depth in general problems of optics but little experience with optical noise. Free from the burden – and biases – of specialization, he came to the problem fresh. “It’s easy to come up with new ideas when you don’t know anything,” he says with a smile.

After a stint in the Democratic Republic of Congo managing logistics for Doctors Without Borders, Morgan returned to Canada. Having seen the value of solar in Africa, he was anxious to support its growth globally. “My first thought was to work for someone else,” he recalls. “I researched other companies. But then I thought I had a much better way to make panels myself.”

He founded the firm with his brother, Nicolas, in 2007 out of a desire to see solar become the world’s most affordable and widely used energy source. Morgan produces panels and the tracking devices that move the panels to capture the sun’s rays.

I ask what contribution he’s made to the industry. “We invented and patented new ways of steering light inside the panels,” he says. “You have light bouncing around and the goal is to get it all absorbed in those cells [which produce the electricity]. You want to dump as much light on them as possible – to deliver more power.”

Morgan explains that, to maximize light absorption, earlier engineers attempted to make solar panels that essentially included a magnifying glass. But their concepts turned out quite thick, bulky and impractical. “Our breakthrough was to make a flat panel,” he says. “We developed optics which are right in the panel, so they’re paper-thin.” Thick panels use too much raw material and that can be costly. “Anything that is to be spread over a massive area has to be thin.” 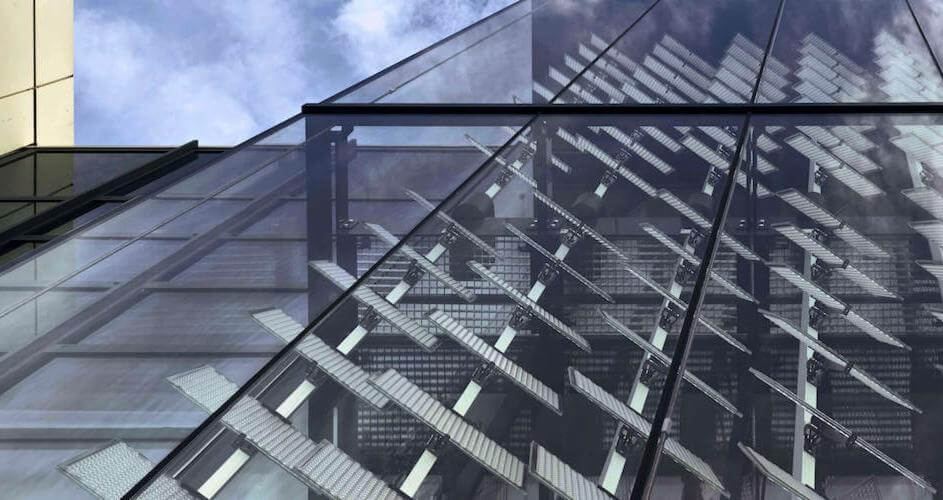 A project in the Netherlands with the SPOTlight panels integrated in Lumiduct, developed by Wellsun, a partner of Morgan Solar.

The company is also an innovator with respect to trackers, equipment that lets the panel follow the sun as it crosses the sky. This technology can maximize energy output by allowing the array to face the sun throughout the day. But the tracker can have a co-benefit. If it’s installed in a farmer’s field it can physically block some light from hitting crops, thereby improving their yield.

“In countries like Japan, the only land is agricultural,” Morgan explains. “So you want to do both: solar energy and crops. We found there’s a synergy between the two where the crops do a little better because of the solar panels. Some crops can improve from partial shade. You can make light levels a little lower to avoid burning plants.”

It’s a brilliant solution. A single field produces both food and electricity and, depending on community need, the Savannah Tracker prioritizes one or the other. “You can dial down the solar output and dial up the light hitting crops, if that’s needed,” Morgan says.

When he started the company 12 years ago, a key objective was cost containment. Today, he says, “Solar panels are (almost) cheaper than plywood.” Right now, panels start at just twice the price, though at one point in California, Morgan recalls, it was less expensive to purchase solar panels than plywood. Considering panels were $500 per square metre when Morgan Solar started in 2007, it’s quite a drop.

The challenge is getting politicians to understand this. “Policy-makers were educated when solar was this impossibly expensive dream, when people said, ‘Can we afford to do this?’ Now the question is, ‘Can we afford not to do this?’ I think solar is going to enable a future where energy is almost zero cost.”

As I leave the Stockyards District, I’m struck by the fit between Morgan and his surroundings: He’s an inventor in a neighbourhood that’s reinventing itself. And I’m reminded of his advice about how invention emerges: “In 2007, I worked 24 hours a day churning out concepts. You have to have the appetite to study a thousand dumb ideas that don’t lead anywhere.”