When Toronto council recently upgraded its climate change plan, one of its 2050 goals was cutting emissions by 40% for every building. With more modern structures, those reductions may be relatively straightforward to find. But for older brick homes and Toronto’s far-flung portfolio of 1960s-vintage high-rise apartments, owners and landlords will have to be far more aggressive in their planning for retrofits; merely installing efficient furnaces, solar panels and LED lights won’t cut it.

A critically important part of the solution lies in the so-called building envelope – the assemblage of brickwork, siding, windows, and balcony slabs that comprise what architects describe as the “skin” of a structure. Find a way to plug all the leaks – all the little nooks and crannies where draughts lead to over-use of heating or air-conditioning systems – and the fossil fuel reductions will follow.

One such retrofit is now underway at a 53-year-old Hamilton apartment building owned by the city’s affordable housing company. The 18-storey Ken Sobel Tower is being completely re-clad, with a projected 94% reduction in emissions. The project is considered to be the first Passive House retrofit of an existing residential tower in North America.

According to project architects, Ya’el Santopinto and Graeme Stewart of ERA Architects, the building is getting a double layer of insulation – about 10 cm on the interior walls and another 15 cm on the exterior, all of it made from Rockwool, a recycled mineral residue with significant insulating properties.

The insulation is only one part of this cladding system. On the exterior wall, the design team covered the crumbling old brick with a cement-like coating instead of the traditional blue or green vapour barrier sheets used in most construction projects. This coating halts the movement of moisture and also adhered more effectively to the rough brick surface, says Santopinto. “You just trowel it on.”

The new exterior cladding will be stucco panels, but the design called for the use of plastic fasteners instead of traditional metal clips, so as to minimize what’s known as “thermal bridging” – the transmission of heat out and cold in. (The concrete slabs that form the floor of apartment balconies tend to be the worst offenders when it comes to energy loss due to thermal bridging.) 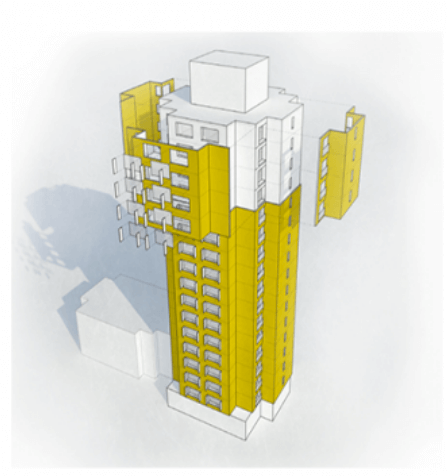 As for the glazing, the refurbishment calls for the replacement of the old windows with new triple-pane models that have a high R-value. What’s more, the replacement glazing is actually inserted into the new layer of external insulation, where it is secured in place with fibre-glass clips and layers of silicon that further block both draughts and energy loss transmitted through building materials. Stewart points out that new cladding and windows should be thought of as an integrated system, and the most effective way of slashing building emissions.

The project, supported by funding from the Canada Mortgage and Housing Corp., got something of an unexpected assist when the architects found mold in the walls – a discovery that meant the tenants had to move out for the duration of the project, allowing a more thorough retrofit of the unit interiors.

Before construction began, Santopinto says her team conducted a complete “building air tightness test” to show how frequently the interior air was completely expelled and replaced. The rate was about five times per hour (for contemporary condos, that figure drops to about two). According to ERA’s calculations, the turnover rate will drop to just 0.6 once the project is complete.

The dividend is not only less energy consumption for heating and air-conditioning. In individual units, some of the ambient heating will actually come from the energy given off by appliances. Santopinto adds that the airtight envelope means that individual apartments will remain habitable in the winter for four days after a power outage.

For Ken Sobel residents, the new envelope means apartments that are much more comfortable to live in; no more temperature spikes and dips, or cold spots near the windows. For Hamilton’s affordable housing agency, meanwhile, the retrofit will slash operating costs, maintenance outlays and carbon emissions.

This kind of building envelope replacement is standard in countries like Germany, but remains relatively uncommon here, although more and more property owners are commissioning such retrofits.

Santopinto and Stewart add that as the number of such projects grows, each new one becomes more straightforward to complete. There are more skilled trades people who have mastered the techniques. The market for specialized components grows, so unit costs fall. And what once felt like an involved design solution to a technically complex engineering problem becomes a set of well-understood set of processes that can be readily replicated in building after building.

“In a way,” reflects Stewart, “this is dead simple, but getting there took a long time.”