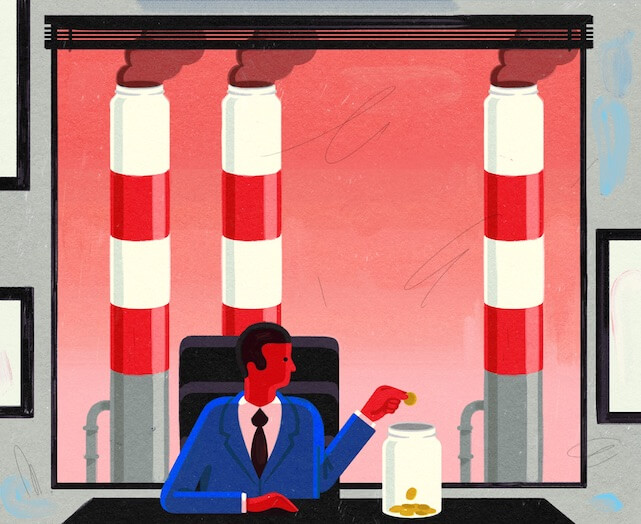 If the remaining two supermajors, BP pledged to align its business with the aims of the Paris Agreement and has begun linking some staff bonuses to its low-carbon progress, and Chevron plans to set targets and tie executive compensation and rank-and-file bonuses to carbon reductions.

Of the largest 308 companies in the 14 most carbon-intensive sectors tracked by TPI, fully 107 of them now link senior executive pay to climate performance (including Cenovus, Enbridge, Imperial Oil, Teck Resources, TransCanada – now TC Energy – and Suncor in Canada).

Despite political battles over climate change measures at the government level, the topic is moving to the top of corporate agendas. It’s becoming not just a public relations exercise but also about competing. Competing for investor capital that is increasingly attuned to the risks of the energy transition, not wanting to get stuck holding a bag of stranded assets. Competing for customers who are consciously choosing vendors whose policies dovetail with their own. Competing for talent looking to impact the world and help ensure the long-term sustainability of our society, and who will steadfastly not work for companies lagging behind critical megatrends.

Executives are increasingly aware of the importance of sustainability issues and have been for the last number of years. According to a 2016 survey by the UN and Accenture, 98% of executives believe sustainability is important to the future success of their businesses. The problem is, up until recently, few of them had their performance linked to sustainability metrics.

Of the largest 308 companies in the 14 most carbon-intensive sectors, 107 of them now link senior executive pay to climate performance.

For the last 30 years, executive compensation has been tied to financial targets and shareholder returns. Despite its popularity, compensating executives for total shareholder return is fundamentally unfair since so much of that return is beta (a measure of a stock’s volatility in relation to the market), which is something they can’t control, and alpha (the investment return over and above a benchmark index) is notoriously hard to find in certain sectors. CEOs will tell you they focus on what they can control: so why have boards been tying executive compensation to share performance, which management can’t control, and not to sustainability practices linked to surviving and thriving in the transition to a low carbon economy, which they can control?

Decades ago, when companies were facing issues with quality control in the manufacturing sector, boards of directors began to include quality metrics in compensation to focus executives on a key factor affecting the bottom line. CEOs embraced the idea because they like control, measurements and meeting targets. The same thinking should be deployed to address climate-related risks and harness climate-related opportunities.

When it comes to management of climate risk and opportunity, businesses have many metrics from which to choose, but comparable metrics are not yet commonly deployed. Every business leaves a carbon footprint, so measures to reduce that footprint could be easily adopted (although it’s not always most relevant to a business case). Financial-services firms can allocate a percentage of capital to climate-friendly projects, such as renewable energy, climate-resilient infrastructure or sustainable agriculture. All companies could commit to zero-carbon energy targets. They could also commit to more climate-resilient infrastructure. Finding the right company-specific metrics to incentivize efficiency and sustainability over the medium to long term is key.

Doing so can bolster a company’s reputation among its stakeholders and generate political capital with government regulators (who can grant the company great freedom of movement, amend legislation and regulations or provide greater tax exemptions). Many climate-related measures can provide a return on investment through reduced energy consumption and waste over the medium to long term. And of increasing importance, they can avoid costs by proactively managing future climate risks and reducing “emergency” responses and spends.

It’s not only about downside risk. Companies can use compensation incentives to support the creation of new products and services to address urgent needs around the world, such as scarce water supplies, hunger and the need to support renewable fuels and clean electricity development.

As the World Economic Forum’s January 2019 publication on effective climate governance for boards sets out, monetary incentives for senior management teams should be tied to long-term organizational goals that contribute to resilience and prosperity over time. There is little to prevent linking climate-risk and opportunity-related factors to compensation schedules. There have already been significant advancements in linking corporate social responsibility (CSR) to executive compensation, and it’s worked.

Europe’s largest firms are already well on their way to incorporating climate change into executive compensation, according to the CDP, a global non-profit that measures sustainability impact. Looking at firms worth three quarters of European market capitalization, they found that 47% of companies reward senior management for managing climate topics, with one in four tying incentives to climate targets. For example, BNP Paribas aligns top managers’ compensation to climate-related indicators, such as financing renewable energy projects and carbon pollution targets (measured as carbon-equivalent per employee).

In Canada, the information is spottier, but major financial institutions are leading the way and beginning to incorporate the climate crisis into compensation schemes. For instance, RBC and TD’s senior executives have monetary rewards linked to environmental commitments and targets. And the Quebec pension fund La Caisse has linked compensation to climate targets across the organization. Although these are admittedly “small carrots” in the larger compensation picture, the carrots appear to be helping nudge towards alignment of corporate and climate-related goals.

Executive compensation can be an effective tool to spur innovation and rapid movement towards a low-carbon future and organizational stability in a climate-adjusted future. To actualize the urgent transition required, we’ll need to pull out all the tools the market has to offer, and fast.

Laura Zizzo is the founder and CEO of Mantle314, a climate risk management consulting firm.