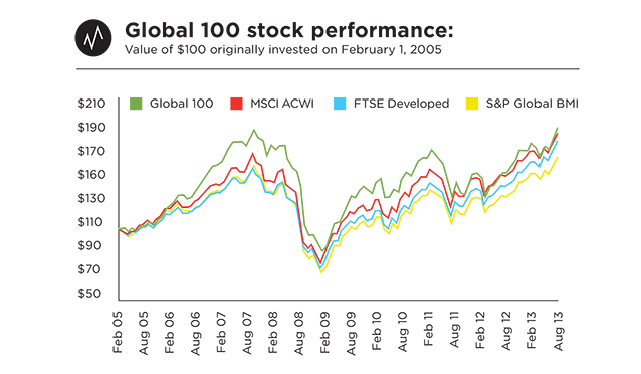 The Global 100 Most Sustainable Corporations ranking, which Corporate Knights has published each year since 2005, is one of the world’s most credible and widely followed corporate sustainability rankings.

What distinguishes the Global 100 from many other sustainability rankings is the nature of its methodology. Instead of relying on analyst judgment or rolled up “black box” sustainability scores, the Global 100 is driven exclusively by how companies perform on a set of 12 metrics covering resource, financial and employee management. Coupled with this “data driven” approach, every aspect of the project, including how each metric is calculated, and how the starting universe of about 4,000 stocks is whittled down to 100, is detailed on the Global 100 website.

This transparency has been a critical factor in the Global 100’s success. In the often murky world of corporate sustainability reporting, stakeholders take a certain comfort level in being able to replicate the Global 100 using the same data inputs as those available to Corporate Knights.

Over the years, the Global 100 has granted its coveted number one position to several recognized leaders in corporate sustainability, including Umicore, Novo Nordisk and Statoil. While the Global 100 is unique in the sense that it uses a data-driven approach to measure something as outwardly nebulous as corporate sustainability performance, from an investor standpoint it is simply a portfolio of 100 global stocks that turns over annually. Given mounting evidence about the long-term connection between sustainability and financial performance, it is worth examining how an investment strategy built around the Global 100 would have fared.

Let’s pretend an investor had purchased one share of each company in the inaugural 2005 Global 100, held those shares for one year, and then replaced them with shares in the next Global 100, then buying and selling shares subsequently to reflect each and every successive annual Global 100 ranking to date.

This strategy, running from February 1, 2005 to October 31, 2013, would have generated a total return of 87.9 per cent. The MSCI All-Country World Index (MSCI ACWI), an appropriate benchmark for a global large-cap equity portfolio, returned 81.1 per cent over the same period. This means the Global 100 has outperformed its benchmark by 6.8 per cent on a cumulative basis since inception.

As most fund managers can attest, beating the benchmark is not easy. It is widely known that most actively managed portfolios fail to consistently beat their benchmarks over time. That the Global 100 – a portfolio of 100 stocks selected using only corporate sustainability data – has outperformed its benchmark since inception makes it doubly interesting.

If we extend this experiment to consider other globally focused “conventional” stock indices, the story does not change. Over the same period, the Global 100 outperformed the FTSE Developed Index by 13.5 per cent and the S&P Global Broad Market Index (S&P Global BMI) by 25 per cent.

Let’s look under the hood of the current crop of Global 100 companies to better understand where some of this performance is coming from. Looking at year-over-year results, Alcatel-Lucent (EPA: ALU) is the top performing stock in the 2013 class. In the first nine months since the release of Corporate Knights’ 2012 ranking, Alcatel-Lucent shares generated a return of 115 per cent.

Novo Nordisk (CPH: NOVO-B) is another success story. First, it is one of only nine companies (the others being Adidas, Centrica, Intel, Kesko, Ricoh, Royal Bank of Canada, SAP and Unilever) that have managed to remain on the Global 100 every year since 2005. Second, it is the single greatest contributor to the cumulative total return of the Global 100. In the nearly nine years since the inception of the ranking, Novo Nordisk’s contribution to the total return of the Global 100 stood at 270 per cent. Based in Denmark, the health care company has long been recognized for its focus on the “triple bottom line” and embedding a broad and long-term view into its organizational strategy.

The Global 100 has gained credibility in the business world because it uses clearly defined indicators and the overall ranking process is transparent. And it turns out that these indicators could serve as proxies for outperformance in the markets. More research is needed to fully flesh out this thesis, but on its merits the financial performance of the Global 100 is difficult to ignore.