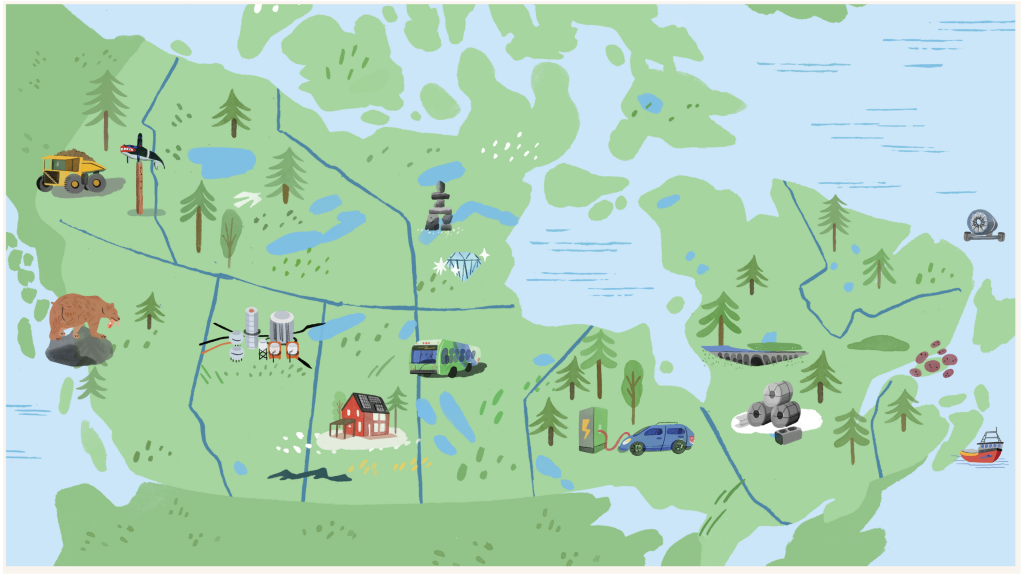 One of the things we have seen over the last few months is we do have the capability to come together and do really challenging things. We never would have imagined the federal government could have turned on a dime to deliver cheques to 8 million people at the pace that we did. It shows that when faced with a challenge we can get to solutions, even complex solutions. That should give us insights into how we can move forward on other complex challenges, and there is probably not a more complex challenge than the climate crisis we are facing as a planet. 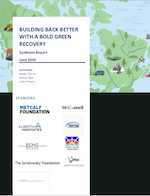 Building Back Better with a Green Bold Recovery – Synthesis Report

Over the last few months, policymakers around the world have taken unprecedented action to protect their people from the COVID-19 pandemic. As we move beyond the acute phase of the health crisis phase, countries are now designing recovery plans to deal with the economic fallout.

Many of the world’s leading economic and political authorities, including the International Monetary Fund, the International Energy Agency and our G-20 peers, are leading calls for governments to make jobs-rich green recovery. In Canada, more than 40 major business leaders are advocating for a bold green recovery to help get people back to work and bolster Canada’s chances of playing to win in large and growing low-carbon markets where we have competitive advantages.

As policy-makers design economic recovery plans, they are making decisions that will cast the die of our economy for decades to come. For this once-in-a-generation investment, it’s vital that we look ahead and invest in building an economy that’s ready for tomorrow, instead of spending large amounts of public money on infrastructure and technologies that will soon be outdated.

The Building Back Better plan set out in this report is a synthesis of seven white papers published between April 22 and June 3 . Our plan makes it clear that governments have a unique opportunity today to boost economic growth, create millions of new jobs and position Canadian businesses as suppliers rather than buyers in tomorrow’s economy.

This document, put together with input from more than 100 of Canada’s most inspired minds, outlines a series of investments that the federal government could make to set Canada on a path to a resilient, net-zero economic recovery. The areas for investment for the Building Back Better Canada Plan include the following programs: 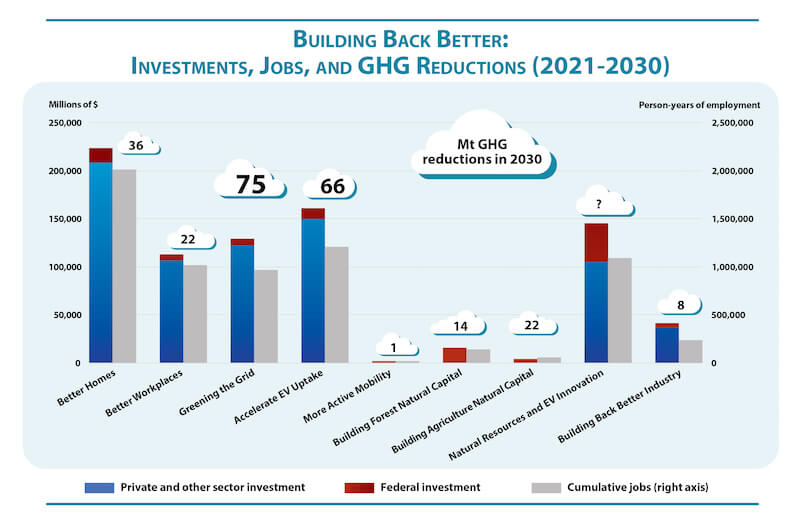 Combined, the proposals create or maintain more than 6.3 million years of employment and crowd in $681 billion of additional investment in the next decade. They would also deliver $44 billion annually in energy savings to Canadians while reducing greenhouse gas (GHG) emissions by 242 megatonnes (Mt) of CO2e per year by 2030 and setting a course for a zero carbon Canada within a generation. The proposals are different from what the federal government currently has in place in two important respects: they go further on emissions reductions and they go to the heart of our industrial policy, targeting investments in high-growth areas where Canada has strong competitive advantages to compete and win in global markets.

The federal investment could be paid for by issuing sovereign green bonds or closing federal tax loopholes and eliminating current Canadian corporate tax breaks, or some combination thereof.

Stronger use of regulations or higher carbon pricing could potentially reduce the cost of the plan for the federal government, but this would likely result in delays – an important consideration for stimulus spending, as well as for ensuring Canadian businesses don’t miss the low-carbon economy train that is speeding out of the station.

The federal contribution would be front-loaded, with almost 40% of it booked in the first two years and half of those early funds earmarked for deep building retrofits, which deliver broad and immediate job benefits (including for the more gender-diverse design and architecture industry) with strong economic multipliers. A study by the International Monetary Fund on climate policy and recovery found that “environmental measures have been a valuable part of fiscal stimulus packages,” emphasizing that “energy efficiency investments are particularly well-suited to stimulus spending,” because they can be executed quickly.

Aside from jobs, this burst of investment would help to create economies of scale and bring costs down, especially for building energy retrofits.

Fully $40 billion of the $109 billion federal portion of the recovery package is earmarked to catalyze commercial-scale investments to ensure Canada is a supplier rather than buyer in the booming global markets for zero-emissions vehicles, clean fuels, property technologies and essential materials for the low-carbon economy.

The capital expenditures projected for these proposals are well within the bounds of routine levels of investment in Canada, which exceed $400 billion per year. For example, in the residential sector, Canadians spend $60 billion annually to renovate their homes. Building Back Better Homes and Workplaces would redirect 10% of existing renovation spending in the first year, rising to 60% in the fifth year and declining to 15% of current investments in the 10th year. During the transition to a fossil-free electric power system throughout Canada, the Greening the Grid proposal for investments in solar, wind and storage capacity averages $12.9 billion per year in a sector that routinely absorbs $22 to $23 billion per year in capital expenditures. Combined with other expected investments in this sector, including those needed to finish hydro megaprojects already underway, total investment in the electric power sector is expected to grow by about 20% during the transition to a carbon-free grid.

Our proposal is that the Building Back Better Canada Plan would ensure that, starting now, integrated and mutually supportive zero-carbon investment programs support Canada’s move to net-zero emissions while delivering strong risk-adjusted returns to Canadians through their savings and pensions.

In addition to direct federal investment, it is essential that the federal government set the right policy framework to drive the transition to net-zero and use its spending power to encourage provinces and municipalities to follow suit by attaching green strings as a condition for accessing federal stimulus funds. The need for supportive policy spans across all the proposals included here, from model building codes and zoning for zero-carbon affordable housing, to zero-emissions vehicles mandates, fast and fair power-grid access for storage and renewables, recalibration of agricultural subsidies, circular economy targets, and large-scale green government procurement, including embodied carbon of building materials. Providing a clear policy direction to drive toward a zero-carbon economy is essential to sustaining the momentum and securing investor confidence.

This Building Back Better Plan is a different kind of plan from what happened following the global financial crisis of 2008-9, when just 8% of Canada’s stimulus contributed to sustainability and resiliency, compared to 12% in the U.S., 38% in China and 59% in the European Union, according to HSBC Global Research.

This time we have a government that was elected with a strong mandate for climate action and a clearly stated commitment to transitioning Canada to a low-carbon economy. The government is rightly focused on getting the economy growing and people back to work as quickly as possible, especially women (who lost more than twice as many jobs as men). The best way to do that is with investments that profit from the immediate returns from energy efficiency and significant savings from steeply declining renewable energy costs.

Ipsos global poll: 61% of Canadians said they agree or tend to agree that “in the economic recovery after COVID-19, it’s important that government actions prioritize climate change” – and that was without being given information about the job-rich nature of a green recovery.

Some of the world’s leading economists recently completed an analysis of possible COVID-19 economic recovery packages. They concluded that compared to traditional fiscal stimuli, green projects create more jobs, deliver higher short-term economic returns per dollar spent and deliver higher long-term cost savings. This finding is also supported by McKinsey’s research,  which found that a low-carbon recovery could not only initiate the significant emissions reductions needed to tackle climate change but also create more jobs and economic growth than a high-carbon recovery would.

Applying a climate lens to economic recovery can help us identify some of the best opportunities to get people back to work immediately while building a more resilient Canada for the long-term, ready to capitalize on new global growth trends.

Chart notes: (1) Federal contribution is front-loaded in first two years to maximize stimulus impact, bring costs down and incentivize complimentary policies essential to crowd in private capital and sustain the momentum. (2) Includes direct and indirect jobs as per Statistics Canada and Torrie Smith Associates analysis. Job years correspond to 1 job for 1 year; job multipliers measure only employment created during spend. In practice, economic stimulus/recovery could create jobs that become self-sustaining, resulting in more job years than shown here. (3) Based on gross-value-added (GVA) multiplier at a sector level as per McKinsey & Co. (4) Based on analysis by Torrie Smith Associates available here: https://www.corporateknights.com/wp-content/uploads/2020/04/CK-Residential-Retrofit-Calculator-200602.xlsx, https://www.corporateknights.com/wp-content/uploads/2020/04/CK-Commercial-Building-Retrofit-Calculator-200422-1.xlsx, https://www.corporateknights.com/wp-content/uploads/2020/04/Carbon-Free-Grid-Calculator-200527.xlsx, https://www.corporateknights.com/wp-content/uploads/2020/05/CK-Transport-Calculator-200611-V9.xlsx (5) Most of the greenhouse gas reductions from these investments would be concentrated downstream in what is known as scope 3 emissions, resulting from displaced emissions by light-weight carbon fibres as one example.