By pledging to reach carbon neutrality by 2050, the Canadian steel industry has launched itself on a massive transformation.

To meet this target, the industry will need to overturn a century of blast furnace steelmaking. These furnaces, huge cauldrons of molten metal at temperatures of more than 1,600°C, consume vast quantities of metallurgical coal, and in the process spew millions of tonnes of CO2 into the atmosphere.

“I can’t stress enough how significant a transformation this is,” says Catherine Cobden, CEO of the Canadian Steel Producers Association (CSPA), which made the net-zero pledge in March 2020. “It is an aspirational goal, and it will take a significant effort to achieve it.”

But critics say the 2050 goal has not been matched with detailed targets and plans, particularly in the industry’s Southern Ontario heartland. With tens of thousands of people directly and indirectly employed in the industry in Hamilton, there is no city with a greater stake in the future of steel.

“Our local mills are Hamilton’s climate elephant in the room,” says Lynda Lukasik, a 20-year veteran of the anti-pollution group Environment Hamilton. “We clearly need the sector to do something to begin the journey to decarbonization. But we have seen very little action on this front so far.”

So how will this industry journey from its high-carbon present to a net-zero future? To understand this, it’s helpful to know how steel is made.

The dirty side of steel

The first step is to create iron, the basic ingredient that gives steel its strength, light weight and malleability. To create iron, oxides (oxygen molecules) must be removed from iron ore. In most steelmaking centres, including the huge integrated complexes in Hamilton, Sault Ste. Marie and Nanticoke on Lake Erie, this is done by baking coal in high-temperature ovens to produce a hard, grey substance called coke. The coke is heated with iron ore in a blast furnace, producing liquid iron and emitting carbon dioxide as a waste gas. After being further refined in a basic oxygen furnace, the resulting liquid steel is cast into slabs, bars and coils in finishing mills.

These processes take a heavy toll on the climate. The steel industry is responsible for about 7% of global CO2 emissions. In Canada, steel’s share is less because of the huge carbon footprint of our oil and gas industry. Nevertheless, in 2019, steel accounted for 16 million tonnes of CO2, 2% of Canada’s total greenhouse gas (GHG) emissions.

Many companies collect steel scrap, then use electric arc furnaces (EAFs) to melt the scrap back into liquid steel. While EAFs have a much lower carbon footprint, the supply of scrap steel is limited and scrap can’t produce higher grades of steel, so its climate-saving potential is hampered.

In support of its net-zero pledge, the CSPA and its research partners have developed a GHG reduction framework to steer the industry toward low-cost near-term projects that can achieve at least some CO2 reductions by 2030 and long-term projects requiring a bigger commitment of capital and resources after 2030.

Some of the near-term projects in the works:

• ArcelorMittal Dofasco (AMD) in Hamilton is working on trials to replace 40,000 tonnes a year of coal with biomass, such as forest waste. AMD also uses waste gases to power cogeneration equipment with a capacity of 40 megawatts of electricity.

• Stelco is planning a 65 megawatt cogeneration plant and has developed a technology to reduce coke consumption using waste railway ties. Another Stelco project plans to capture 6,300 tonnes of CO2 to produce algae for fish feed and bioplastics.

Algoma in Sault Ste. Marie has made incremental changes as well through cogeneration and other technologies. But in May, it announced a possible switch from blast furnace steelmaking to electric arc production. This would be a major retrofit that could reduce emissions up to 70%; however, it hinges on sourcing sufficient electricity to power the furnaces and scrap steel to replace blast-furnace-produced iron.

While these technologies will result in some near-term emission declines, they aren’t enough to transform the industry to net-zero.

“People need to recognize the reality we are facing with our steel plants,” says Lukasik. “The facilities are major emitters. The companies need to undertake profound upgrades to the primary production elements in order to realize substantial [CO2] reductions.” 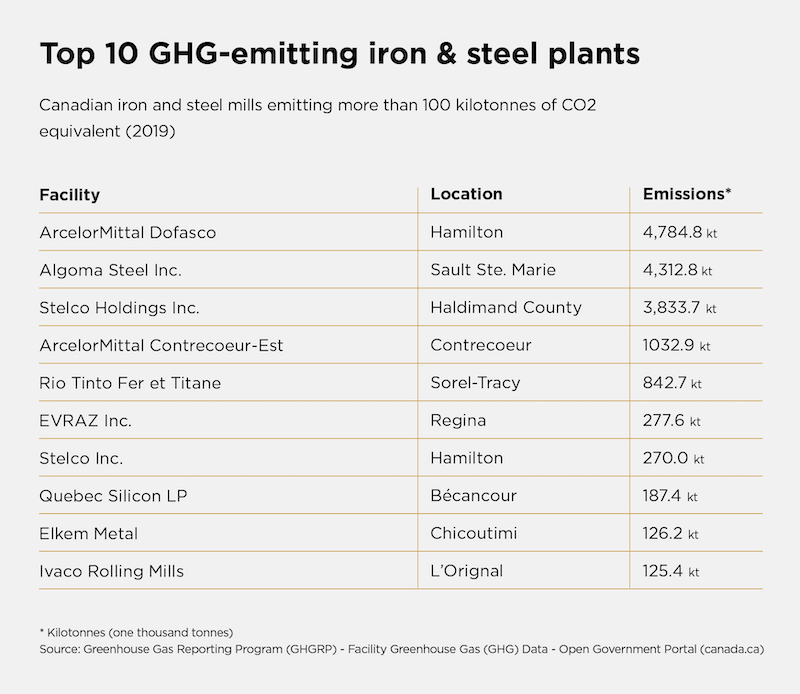 Electrowinning – the extraction of oxides from iron ore by electricity rather than coal – is one of the transformational technologies being examined by AMD. But the industry consensus is that green hydrogen technology (hydrogen powered by renewable energy) has the most potential to enable the industry to transition away from coal. Hydrogen can be used as an alternative to coke because it can bind with the oxides in iron ore without emitting CO2. Hydrogen can also build on existing direct reduced iron (DRI) furnaces that reduce ore to iron using natural gas. While natural gas emits CO2, the technology can use hydrogen instead, creating the potential for carbon-free steel. Many plants around the world use these furnaces, including an ArcelorMittal plant in Contrecoeur, Quebec.

There are a number of hydrogen DRI projects underway in Europe, including a joint project by steel company SSAB, iron miner LKAB and power producer Vattenfall of Sweden, which aims to begin production of fossil-free steel by 2026. ArcelorMittal is also building a hydrogen DRI plant at its operation in Hamburg, Germany.

In Canada, the availability of low-carbon hydroelectricity has inspired Iron Ore Co. of Canada and Rio Tinto to launch a feasibility study for a hydrogen DRI plant in Quebec or Labrador.

Too costly to scale?

While these new electricity-based technologies are on the horizon, the cost of bringing them to commercial scale isn’t justified by current steel prices. But there are signs that is about to change.

In one of the most important developments, the federal government has imposed a sharply higher price on carbon, rising gradually from $50 a tonne in 2023 to $170 a tonne in 2030, creating a huge incentive for large emitters to reduce their CO2. “At $50 a tonne, it’s an urgent issue; at $170, it’s existential,” Cobden says.

As well, the industry was encouraged by the recent joint Canada-U.S. Greening Government Initiative, a plan to mandate low-carbon suppliers and infrastructure in government operations and projects.

The final piece of the public-policy puzzle is government support for demonstration projects.

In April, the federal government added $5 billion to its Net Zero Accelerator fund, promising to spend $8 billion over seven years, which, together with some new tax incentives, has the potential to deliver major federal funding to the steel industry.

But hanging over these mechanisms is a world awash in cheap, high-carbon steel, primarily from China. The average GHG intensity of Chinese steel is 2.2 tonnes of CO2 per tonne of finished steel, more than double the Canadian or U.S. intensity.

Cobden says this is why Canada urgently needs to impose tariffs or border controls on high-carbon steel. The federal Liberals have pledged to take this issue to other countries, including the Biden administration in the U.S.

So where is the industry going with its net-zero promise?

Chris Bataille, a Canadian researcher with the Institute for Sustainable Development and International Relations, welcomes the policy developments but argues that Canada needs to think more like Swedish steel industry planners, who take a holistic decarbonization approach.

“We need to think right from the iron mines in Quebec and northwestern Ontario through to Hamilton and Contrecoeur through to the markets where the cars are going. We need to think more in those terms. It doesn’t come easily to Anglo Saxon capitalists,” Bataille says. “You need a vision. If you’re not making your own net-zero steel, you’re going to be importing somebody else’s.”

Growing amounts of steel will be needed to meet mounting demand for electric vehicles and other low-carbon infrastructure, says Peter Warrian, steel expert with the Munk School of Global Affairs and Public Policy, which means the blast furnaces and coke ovens of traditional steelmaking will continue. “Keeping coke ovens operating for another five or eight years is essential if you’re going to make electric cars.”

Echoing this, Cobden is careful to emphasize that the industry has not set an interim 2030 carbon reduction target. Nationally, the government has set a goal to cut CO2 emissions by 2030 by 40% to 45% below 2005 levels. “These are national targets. That’s where the country wants to go. That is not where the steel industry can go in the short term.”

Still, in a few years, the industry is going to have to ante up and make some big capital expenditures. Otherwise, steel buyers might decide it’s better to purchase low-carbon steel from other countries than to wait for Canada’s industry to act.

“The leadership of the industry will come to understand that they have a social legitimacy problem,” says Warrian. “At the end of the day, the steel companies and their shareholders are going to have to write cheques.”

Eugene Ellmen writes about sustainable business and finance. He lives in Hamilton, Ontario.