In the first season of Les Fermiers, a hit French-Canadian TV show about vegetable farming in Hemmingford, Quebec, Dany Bouchard, a young trainee, tells his boss and the show’s star, Jean-Martin Fortier, that there won’t be enough turnips to bring to market that week. “We can’t fight the temperature,” Bouchard says. “We have to be patient.”

Later, Fortier demurs. “Our goal this year is to produce half a million dollars’ worth of vegetables. There needs to be pressure to produce.”

Fortier is putting that pressure on for good reason. He needs to teach his trainees how to survive – and thrive – on their own. The 41-year-old knows first-hand that farming can be profitable but that it takes years of practice.

Fortier wasn’t raised on a farm; he grew up in a Montreal suburb. But when he finished his environmental studies degree at McGill University, he and his wife and partner, Maude-Hélène Desroches, crisscrossed North America learning how to grow vegetables. They talked to older farmers, many of whom told them it was too expensive to get into farming, the labour and long hours too gruelling. But determined, they went ahead with it anyway.

In 2004, Fortier and Desroches bought a piece of land in Saint-Armand, Quebec, that they could manage alone and worked the 1.5 acre plot with tools that looked like they belonged to the last century: broadforks, rakes and hoes. A decade later, Fortier published a bestselling book about their experiences, The Market Gardener, that was translated into eight languages. Fortier became one of Quebec’s most famous agricultural exports and ushered in a new era in farming.

He positioned market gardens, and farmers’ markets, as a solution to the ills of agribusiness, a valid career, a way to build a local community, and a way to change the world. Over the last decade, inspired and inexperienced urbanites around the world have been flocking to the countryside to try their hands at working small plots using traditional farming methods.

One of those urbanites happened to be the head of a massive investment empire: André Desmarais is the 63-year-old investment titan and philanthropist behind Power Corporation, a Montreal-headquartered conglomerate. Power Corp. has $1.6 trillion in assets under administration, including holdings in Great-West Lifeco, IGM Financial, Adidas, Umicore’s parent company, and a number of sustainable and renewable energy firms. He and his brother, Paul Jr., are the eldest siblings in one of the country’s most powerful families. They just retired from running Power Corp. in December.

So what drew the high-powered billionaire to farm life?

“The impetus was my grandson,” says Desmarais, who’s married to former Prime Minister Jean Chrétien’s daughter, France. The birth of their grandchild in 2013 and the vision of a fellow philanthropist and friend, the late David Rockefeller, sparked Desmarais’s interest in organic food and agriculture. In 2003, Rockefeller put aside 80 acres that once belonged to his grandfather, John D. Rockefeller, to create the Stone Barns in Pocantico Hills, New York. Stone Barns is a working farm and non-profit centre that trains new farmers. Its restaurant, school programs and conferences are designed to engage the public in small-scale agriculture. Desmarais set out to build a similar farm in Canada.

When he approached Fortier to run La Ferme des Quatre-Temps in 2015, Fortier resisted the role, at least initially. But they both wanted to show how small-scale, low-tech farms could be profitable. Fortier made six figures on less than two acres at his farm in Saint-Armand, Les Jardins de la Grelinette, without, as he wrote in The Market Gardener, “being embedded in the globalized economy.”

Teaming up with Desmarais meant amplifying that message with a billionaire’s backing.

The globally renowned investor seeded several million dollars to set up La Ferme des Quatre-Temps, a social enterprise paving the way toward “a more ecological and nourishing food system,” according to its website. Quatre-Temps relies on local everything, uses few fossil fuels, sells directly to customers interested in supporting the farm-to-table model and trains budding farmers from countries such as Italy and New Zealand. 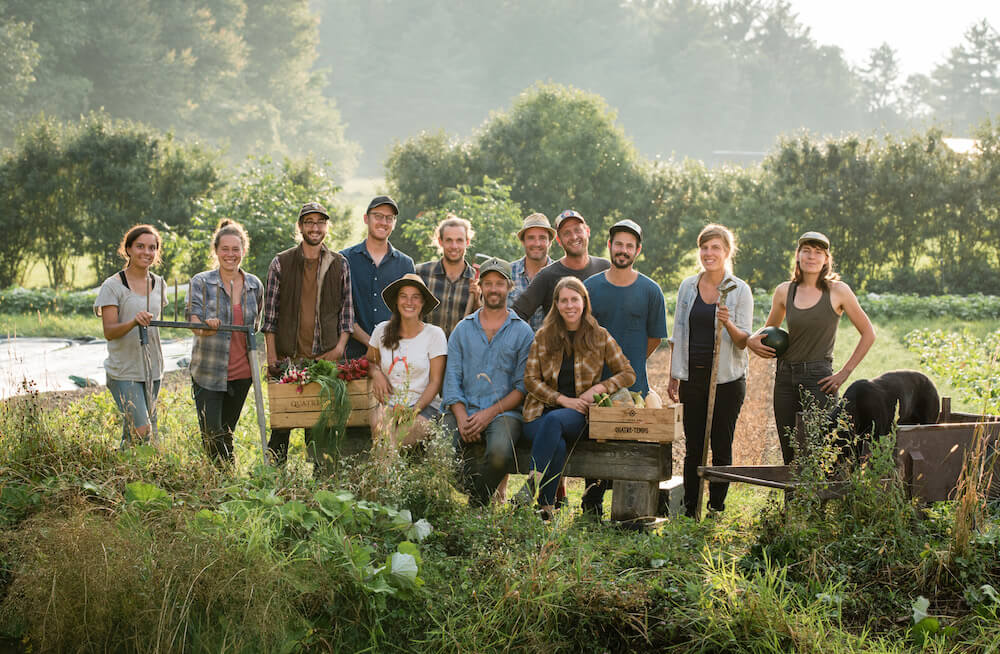 Desmarais’s initial goal, as he told Bloomberg in 2018, was to demonstrate to young people that having a healthy farm could be profitable and pull in $100,000 in revenue each year.

In 2018, Quatres-Temps sold $700,000 worth of vegetables from eight acres, up 40% from the year before. Its produce, pastured meat and eggs are now in 27 high-profile Montreal restaurants, as well as several farmers’ markets. But, Desmarais admits, “Our farm does not make my estimated $75,000 profit at this stage. It is a more modest $50,000 pre-tax profit.”

He explains, “I have more workers than necessary. We [want] to train as many people as possible.” Research and development, he adds, are key to this farm.

“We try many new methodologies and ideas. A normal farmer cannot do this.”
Desmarais and Fortier are now using technology to grow their impact via a virtual master class, which 1,200 people have taken to date. Desmarais calls it a “multiplier effect we did not previously appreciate or anticipate.”

How farmers work their land has never been more important. As the climate crisis escalates, the connection between soil health and the resilience of food systems has become clearer. Agriculture and forestry contribute to a quarter of all greenhouse gas emissions worldwide, according to the Intergovernmental Panel on Climate Change, and to 10% of Canada’s emissions. Conventional agriculture, defined by the use of chemical fertilizers, monoculture planting and heavy machinery, puts too much carbon in the atmosphere and not enough in the soil.

But farms can also be part of the solution, mitigating climate change by storing carbon in healthy soils. In regenerative agriculture, like the kind practised at Fortier’s farms, farmers avoid tilling to prevent soil erosion, use cover crops and tarps to protect soil or kill unwanted plant life, and plant diverse crops to make the soil more productive. These practices increase the organic matter in soil, which can lead to higher yields and reduced carbon emissions.

Not that Desmarais or Fortier are positioning their farm venture as a silver bullet for the climate crisis. “Remember, our farms are small in land mass and very efficient,” says Desmarais. But those two attributes can also help make farms more adaptive to a changing climate.

Experts say that the ideal scenario, especially in a country as geographically diverse as Canada, is a range of farming practices. “We should be maximizing support to regionally adaptive approaches,” says Stéphane McLachlan, a professor of environmental science at the University of Manitoba. But regenerative agriculture can have a big effect on a large scale. The evidence is so convincing that General Mills, one of the world’s largest packaged food companies, says it will convert one million acres of farmland in the U.S. and Canada to regenerative practices by 2030.

Some provinces are embracing ecological agriculture more rapidly than others. Quebec has the largest number of certified organic producers in the country, and it added hundreds more between 2017 and 2018, according to the Canada Organic Trade Association. 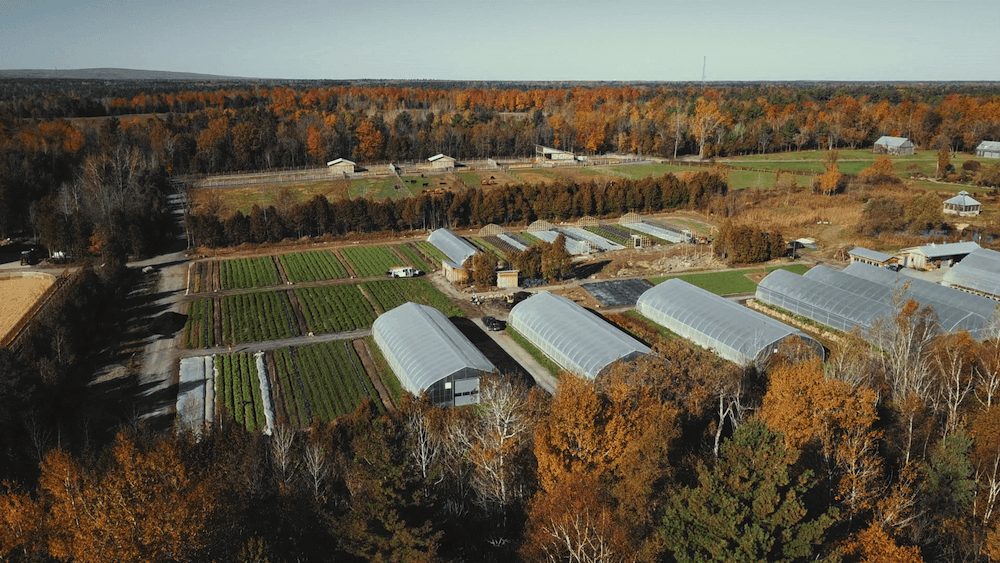 Quebec is also a leader when it comes to support for aspiring farmers. Conventional farms are expensive to own and run, which makes it challenging for young farmers to get into farming and harder for older farmers to find successors. According to Fortier, provincial grants have helped young people start more small-scale farms and have created a more sustainable farming culture. “Farms [here] are well funded,” he says, “and service, training and expertise are passed on.”

The next generation, including Natalie Childs, who co-owns Agricola Cooperative Farm in Papineauville, Quebec, and who trained under Fortier, is using that low-tech expertise to support big goals. “I wanted to do something concrete that helped to build the world I wanted to see,” Childs says. “People want to eat good food that allows them to be a part of the solution.”

Is Quatres-Temps a window into the future of the Desmarais investment empire and a bellwether move for the future of farming in Canada? Desmarais would likely tell you he’s not in this for his own financial gain. But through this tiny eight-acre farming venture, he’s determined to prove that sustainable farming can be a money-maker – if not for global holding companies, then for growers and the communities they serve.

“Regional economies are having economic difficulties because of lack of opportunities,” says Desmarais. “The art of farming in a green way is being lost. We must keep the knowledge alive, and we must push it to develop itself so that it becomes even more efficient and profitable for the farmer.”