They have become perhaps the most emblematic hallmarks of the fast-rising vertical metropolis of the 21st century: soaring towers, both offices and condominiums, draped in sheets of glass of varying hues, their gleaming facades sometimes punctuated by cursory balconies or, in other cases, sheer and implacable.

While the “glass curtain wall” – so-called because it is not load-bearing but rather hangs – is more than a century old, it has become an oft-copied high-rise design feature, as likely to appear on the skyline of Songdo, South Korea, as in Manhattan, Toronto or Vancouver.

Yet buildings dressed all or mostly in glazing tend to be environmental disasters. Glass itself is very high in embodied carbon. Such structures, in turn, are difficult to heat and cool efficiently because the predominantly aluminum frames and brackets that hold typically low “R-value” (a measure of insulation effectiveness) glass panes function like “thermal bridges,” importing cold and exporting heat.

Is it possible to build a more sustainable glass curtain wall? “Glass buildings are inappropriate responses to the climate emergency in which we live,” says Monte Paulsen, a Passive House specialist at RDH Building Science, in Burnaby, B.C. “There is currently no way to construct a glass box that will achieve a high level of thermal performance. Glass boxes are unique in that they perform terribly year-round. These are facts of physics.”

Other experts agree: “Regrettably, there’s not been a lot of improvements in the performance of curtain walls,” says Ted Kesik, a professor of building science at the University of Toronto, adding that the pre-fab window assemblies typically found on condo towers are even worse. “They really suck. It’s sort of the worst of the worst.”

But, Paulsen adds, there’s an enormous amount of climate-focused innovation taking place in the global glazing industry right now, which seems to point toward progress in the carbon performance of new buildings, provided governments in less carbon-progressive jurisdictions like Canada get on board with more demanding building codes.

“Glass buildings are inappropriate responses to the climate emergency. They perform terribly year-round.”

Several leading European window-assembly manufacturers – Raico, Schueco and Wicona – have created high-performance aluminum frames designed to “break” the thermal bridge with plastic separators to prevent the transmission of heat or cold. Photovoltaic glass, an experimental product invented in 2014, is moving toward commercialization.

Other manufacturers, including B.C.’s Cascadia, have tapped into a growing market for triple-pane windows filled with argon gas. Kesik notes that a window’s R-value doubles if the builder opts to go with triple- instead of double-pane glazing.

Paulsen adds that a few very large companies, like Guardian Glass, have developed the next-gen version: vacuum-insulated windows, the fabrication of which requires a completely different manufacturing process and therefore a hefty capital investment. “The technology exists and they know how to do it,” he says.

A small Calgary firm, GlasCurtain, claims to have figured out how to make a more energy-efficient glass curtain wall by using extruded fibreglass for frames instead of aluminum. Managing director Peter Dushenski says that as triple-pane windows became more common and affordable, testing showed that the major source of heat loss came not from the glazing but from the frame. Fibreglass, he says, contains less embodied carbon than aluminum, and also is less susceptible to the expansion–contraction cycle that produces leaks and excessive condensation. “Triple glazing and fibreglass really solve these problems.”

GlasCurtain has designed curtain walls mostly for low- and mid-rise buildings and is now working on a few larger university and corporate projects. “We’re seeing a real market opportunity,” says Dushenski, who adds that GlasCurtain’s fibreglass frames were Passive House–certified in 2019, meaning they can be used in low- or net-zero-energy projects.

He admits, however, that this innovation alone won’t solve problems such as west-facing apartments with floor-to-ceiling windows that turn into ovens on sunny afternoons. Emerging technologies can help ameliorate this “thermal loading” effect – for example, electrochromatic glazing, which automatically adjusts the tint but is expensive. Similarly, there are automated window shades, both interior and exterior, that adjust to light conditions.

Paulsen, however, argues for more architectural solutions. Those include the use of fritted glass, or “brise soleil,” which are vertical fins or other exterior structures that serve to shade or diffuse intense sunlight. (The concept emerges from design in hot climates.)

In Passive House–certified buildings, which feature a lot of insulation and very tightly sealed building envelopes, the proportion of wall space dedicated to glazing can be typically no more than 30 to 40%. Consequently, architects have to be very strategic about including and placing windows, which, Paulsen says, should serve one of three functions: providing daylight, a view or ventilation. “A lot of architects, even good ones, design glass walls because it’s easy.” But using glass curtain walls simply for aesthetics, or to create the illusion of more space in small apartments, is a recipe for energy loss. 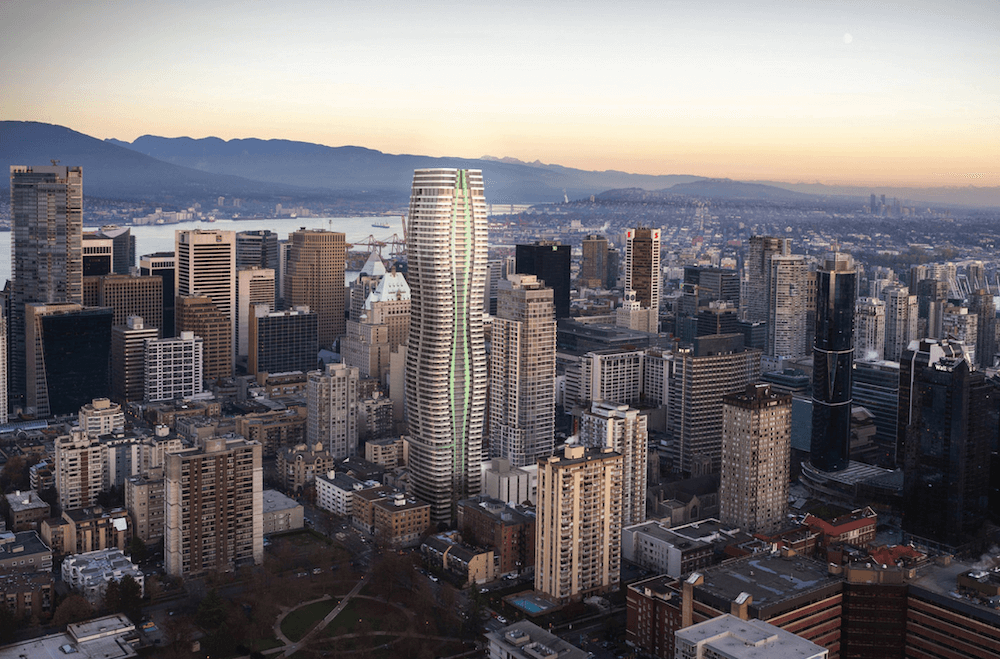 A proposed 60-storey Passive House–certified high-rise in Vancouver, by Henson Developments with WKK Architects, demonstrates one way to get an all-glass look without wasting energy.

Paulsen points to one other approach, for developers that really want an all-glass look: a 60-storey Passive House–certified high-rise in Vancouver, by Henson Developments with WKK Architects. It will include high-end condos, market rental and affordable housing. While the undulating exterior will appear to have a substantial amount of glass (plus balconies), some of the exterior wall will be merely covered with glazed panels, with the wall beneath opaque.

None of these decisions, of course, occur in a vacuum. There’s plenty of evidence to show that jurisdictions with more ambitious energy-efficiency requirements for buildings kickstart local markets for higher-performing building materials. The reason: manufacturers will be prepared to invest in producing and distributing these components when they know that local developers and contractors have to create low-carbon buildings.

Organizations that certify the environmental performance of building projects have a role to play, too. Traditionally, the most widely used North American standard, LEED, assessed the overall energy performance of a building, which meant developers could use an inefficient material, like glass, for the exterior but make up for the poor efficiency with high-end HVAC systems or other green amenities that added points to a project’s overall score.

But Mark Hutchinson, vice-president of green building programs and innovation at the Canada Green Building Council, says certification standards are evolving so that individual elements must pull their weight, for instance with building envelopes now required to meet “thermal energy demand intensity” targets in order to secure a LEED certification.

More stringent building code requirements exist in places like northern Europe and, to some extent, in Toronto and Vancouver, both of which have, in recent years, adopted escalator-type energy standards for new buildings – the Toronto Green Standard and British Columbia’s Energy Step Code – that become steadily more demanding over time, eventually making it impossible to build all- or even mostly glass towers. B.C. plans to make all new construction net-zero by 2032.

Shifting regulations, says Dushenski, will absolutely produce new customers for suppliers like GlasCurtain. But Paulsen argues that the solution lies not in more energy-efficient glazing but rather buildings with less glazing as a proportion of their exterior wall space. As he puts it, “We’ve got to move past glass boxes.”