As the automotive industry attempts to recover from the COVID-19 lockdown, we’ve found bad news and worse news for prospective electric car owners.

For a start, there still isn’t sufficient supply of EVs getting into Canada to meet consumer demand. According to a report prepared for Transport Canada by Montreal-based Dunsky Energy Consulting, just one in three Canadian car dealers had an electric vehicle in stock in the first half of February 2020 (before the pandemic prompted showrooms to close for two months). That figure fell to less than 20% outside of Quebec, B.C. and Ontario, with an average of two- to three-month wait times. “That means many Canadians struggle to find an EV to test drive, let alone buy,” Clean Energy Canada said in a statement.

For those who manage to find the EV of their choice, here’s the kicker: even with the rock-bottom borrowing rates being offered on conventional internal combustion engine (ICE) vehicles during the pandemic, the costs of both financing and leasing remain higher for EVs than for similar ICE vehicles, in some cases by as much as 3.5%. As a result, monthly payments and total cost of borrowing are disproportionately high. For consumers who are already cost-conscious in the current economic climate and find higher EV sticker prices a stretch, their higher leasing and financing rates are likely to be a deterrent.

Why are EVs being left out in the cold?

Since the era of Model Ts, banks have been offering loans for car purchases on the assumption that if the borrower couldn’t repay a loan, the bank could seize the car and sell it for a residual value.

The hitch for EVs is that there’s not a lot of historical data available to establish reliable residual values. That leaves banks working with worst-case scenarios for depreciation. While that means higher financing rates, EV leasing rates are most significantly impacted because of the need to estimate buyout rates.

Corporate Knights looked at the purchase price of the Nissan Leaf, Chevy Bolt and Hyundai Kona, factoring in each province’s available rebates and delivery charges, to examine the differences between leasing and financing rates offered for EVs and ICEs. The calculations are based on having no trade-in vehicle and making no down payment, which would be unusual, and some automakers would require the latter, but doing so equalizes the represented figures as much as possible. The rates shown are promotional and subject to a credit check, meaning they may not be available to every customer. Estimated lease buyouts are calculated based on a 24,000-kilometre annual allowance. These quotes were provided by real dealerships and don’t factor in any negotiating that customers might do.

Through our research, we found that Nissan offered the most extreme example of financing disparity. With the Nissan Leaf Plus, financing rates across Canada were quoted at 3.9% as of late August for both 60- and 84-month terms. In Ontario, where the amount to be borrowed is highest, at $52,571, including taxes and the $5,000 federal iZEV rebate, this equates to a monthly cost of $716 over 84 months, with a total cost of borrowing of $7,587. Reduce that term to 60 months at the same rate and the cost to borrow naturally goes down to $5,377, with a higher monthly charge of $966.

By contrast, in late August it was possible to finance a Nissan Murano ICE SUV for a much more enticing 1.9% over 84 months and 0% over 60 months. Were those same rates available to a Leaf Plus buyer, the 84-month monthly payment would be nearly $50 less, at $669, and the cost of borrowing goes down by more than half, to $3,615. At the 60-month term, where 0% financing means there’s no cost to borrow at all, the monthly payment goes down by $90 to $876.

Hyundai wasn’t much better. While the automaker was offering 0% financing for up to 84 months on many ICE vehicles for much of the summer, the Kona EV rates were quoted at 2.79%. A customer financing a Kona EV in Ontario would borrow a total of $50,356.44 with sales taxes, resulting in a payment of $660.61 per month. This is $54 more than if that same customer opted for a Hyundai Santa Fe Luxury, a much larger gas-guzzling SUV that’s very close on price, at $50,949.44, but with cheaper monthly payments thanks to the 0% financing available over the same term.

In contrast, General Motors was running a promotional financing rate of 1.99% on 2020 Bolt EVs in August, which was more on par with the ICE.

For reference, Canada’s most popular EV, the Tesla Model 3, can be financed at around 2.15%, with a required down payment of $2,500 and a usual wait time of two to three months. 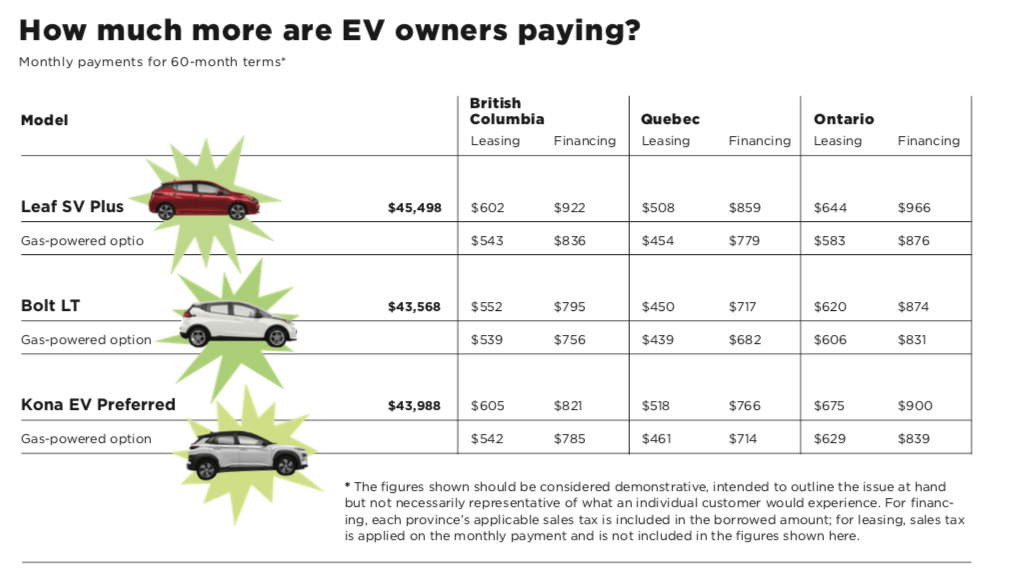 For leasing, 48 months is a common term. Again, Nissan had significantly higher rates than GM for the EVs in our research, with the Leaf Plus at 4.9% (monthly cost of $716 and a total of $6,413 in interest paid). Contrast that with the 1.9% lease rate over the same term on a Nissan Murano; a Leaf Plus at that rate would cost $636 per month and only $2,461 in total interest.

At Hyundai, the gap in lease rates is in some cases greater than with the Nissan Leaf Plus, but the monthly rates remain lower because of the lower up-front cost of the vehicle. A customer leasing a Kona EV in Quebec would pay $560 a month over 48 months at 4.99% for a total interest payment of $5,036; if that same buyer opts for an ICE Santa Fe, the rate goes down to 1.49%. Had the Kona EV customer been given that rate, the monthly cost becomes $488 (a $72 savings), while the overall interest paid would be significantly lower, at $1,486.

As of August, Tesla is finally offering leasing options to Canadians, at least in Alberta, B.C., Ontario and Quebec. The Model 3 requires a $2,500 down payment and comes with a leasing rate of 3.85%, which is higher than similarly priced ICE competitors such as the Mercedes-Benz C-Class, offered at a lease rate of 2.99%.

Fitting monthly payments into customer budgets is key to closing deals. The current higher financing and leasing rates for EVs, the on-paper difference in monthly payments and overall cost of borrowing between EVs and ICEs is wide enough to turn away all but the most determined EV shopper.

How can we start to narrow that gap? A Corporate Knights Building Back Better report proposed a government-led system of guaranteeing EV auto loans over three years. Doing so could be just as critical as rebates to meeting Canada’s EV sales targets of 10% of light-duty vehicles per year by 2025, 30% by 2030, and 100% by 2040, by making it possible for Canadians to purchase or lease EVs with monthly payments that are on par with their ICE-driving counterparts.

Advocates say that if Canada also implements a zero-emission vehicle standard that requires a gradually rising percentage of vehicles sold to be zero-emission (as Quebec does), more Canadians could start driving away with EVs, all without being taken for a ride.