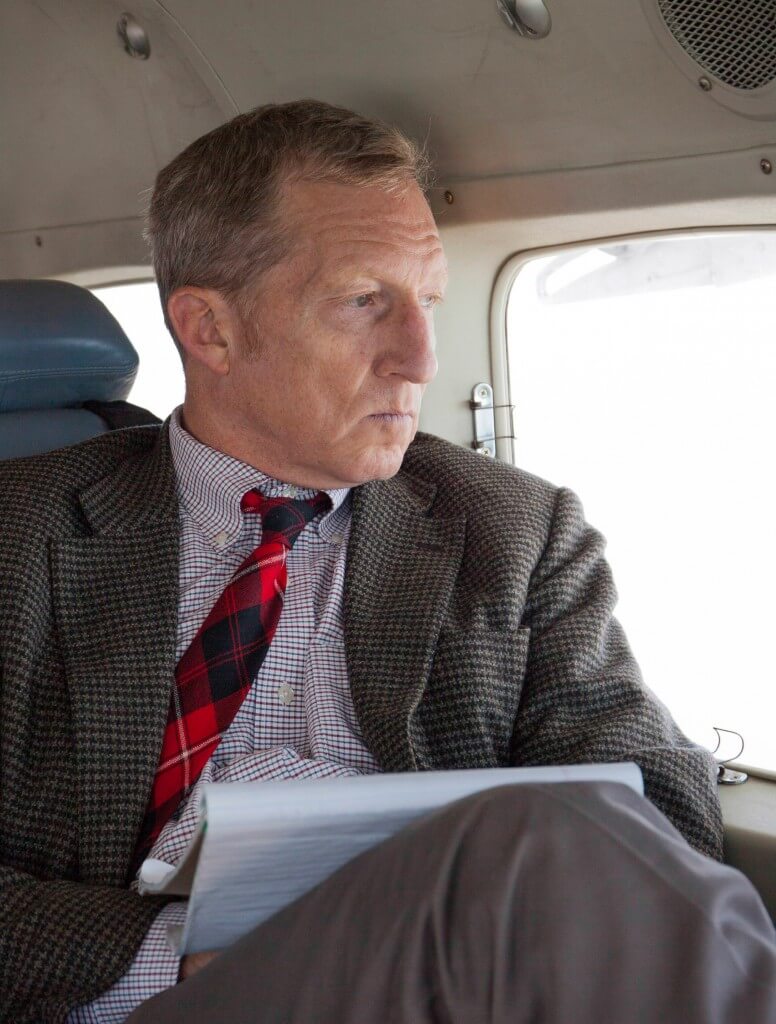 Tom Steyer is looking to pick a fight. Appearing in late April on HBO’s “Real Time with Bill Maher,” the California billionaire issued a public challenge to Charles and David Koch – also known as the Koch Brothers.

Greenpeace has accused Koch Industries, the private company run by the brothers, of being a primary sponsor of the “climate denial machine,” with tens of millions of dollars backing lobby efforts, front groups and politicians willing to protect oil-industry interests.

Steyer is tired of it. On Maher’s show, he issued a direct public challenge to the brothers: Come out of the shadows, put down your expensive megaphones, and debate me like men.

It’s not likely either Koch will go for the bait, but Steyer’s challenge was a serious one. Since October 2012, when he stepped away from Farallon Capital Management, the investment firm he founded and led, Steyer has dedicated himself and his wealth to tackling energy and climate issues.

“History will judge this generation,” he told environmentalist and author Tzeporah Berman, who interviewed Steyer on April 15 for Corporate Knights. He felt no choice but to throw his time and resources – estimated at more than $1.6 billion – into raising awareness of the issues and “bringing urgency to the fight.”

On that front he has already spent millions of dollars protesting the Keystone XL pipeline and helping politicians with strong climate change platforms get elected. In February, he pledged to spend $100 million – half from donations, half out of his own pocket – going after politicians in the 2014 U.S. elections who are anti-environment and deny climate change. His environmental non-profit, NextGen Climate, is leading that charge.

Here, Steyer explains his motives and convictions, views on clean energy, and what he’s likely to take on next in a post-Keystone world.

BERMAN: What motivates you in your fight against Keystone XL?

STEYER: Keystone is a symbol of the bigger fight. I believe what is really going on is the great challenge of our generation – climate change. Many generations seem to have had them in modern history. For us, we are here right at the point in history where humanity is at risk of spewing so much carbon dioxide as to make the planet inhospitable to civilization. So that’s the big motivation. It’s our generation’s great challenge. It’s actually much easier than having to pick up a rifle and storm the beaches at Normandy. But failure will be catastrophic. And think back to other generational challenges – nobody remembers if you were on the right side of 98 per cent of the issues of your time if you flunked the big one. In today’s world, with all that we have learned from science, if you still support fossil fuels over advanced energy, I think that’s your obituary.

So that’s why Keystone is so important. We, in the United States, need to make a decision collectively to go a different way on energy. And this is a very straightforward place to decide, not just that we’re not going to allow the Keystone pipeline but that we’re also going to develop other sources – cleaner sources – of energy. This is going to be the pivot point for us as a country.

There are a couple of other things going on as well. One is that we know Keystone is not the only pipeline being proposed – that it’s one of at least five. But it’s the biggest one. It’s the one that goes through the United States. It’s a matter of public record that they (the oil companies) are trying to develop the tar sands so that it produces many times what it produces today. This (Keystone) pipeline enables them.

Finally, sometimes you just go to where the fight is. There are others too – phasing out coal plants in the U.S. is a huge priority, and building advanced energy is a huge priority. But Keystone is a lightning rod. We’re going to see it never gets built.

BERMAN: And if Keystone is approved by President Obama?

STEYER: I believe with all my heart that the Keystone XL pipeline is not in the best interest of our kids, and I don’t expect the pipeline will be approved.

BERMAN: The big question on all of our minds, then, is what’s next for you post-Keystone, whether or not the pipeline gets a green light?

STEYER: Either way, we will be spending the bulk of 2014 on specific races in the United States. Obviously, it is not a presidential election year, but there are a bunch of governors who are up (for re-election), a third of the senators, and all the congress people.

BERMAN: You made a big decision a couple of years ago to work on climate and energy. Can you tell us a little bit about what you’ve been working on besides Keystone?

STEYER: Three years ago we started to set up a state-by-state business organization to work through the specific policies on energy generation in the United States. The way people use and generate energy is very different by state. The problems are different, and we felt as if there needed to be a local voice for advanced energy or we’d never get the kinds of policies in place, the kinds of regulations in place that are necessary to have a level playing field. We’ve also worked in specific political races. And we’re now doing a study called “Risky Business” to show that you don’t have to choose between the economy and the environment. This study, working with Hank Paulson and Mike Bloomberg, essentially asks “What’s the economic impact if we do nothing on climate?”

BERMAN: How, in your mind, does the United States meet its energy needs if we’re addressing climate change to the degree that’s necessary? What does that look like?

STEYER: Well, one thing we do know is that there are a lot more jobs in advanced energy than in fossil fuels. There are more jobs today just in the U.S. solar industry than coal and natural gas combined. So the outlook is positive. But I don’t trust anybody who says they know how the future looks for sure. If you look at what happened when we broke up Ma Bell and deregulated the telecom industry, basically nothing looks the same today. I think in 1983, when they did break up Ma Bell, Alexander Graham Bell would have felt quite comfortable making phone calls in the system as it existed then. Today we’ve made incredible advances beyond that point. In the same spirit, I would say that if you look at the energy generation and distribution business in the United States, Thomas Edison would feel quite at home since it is the system he set up. Is there any other business in the world that is still the same after 100 years? The telecom industry went from very old-fashioned stuff in 1983 to things that my parents never heard of. Advancements in clean energy are poised to do the same.

BERMAN: Former U.S. energy secretary Steven Chu once told a crowd of oil executives in Calgary that the Keystone debate is overshadowing other opportunities for energy exports. He talked a lot about Canada’s hydroelectric potential, and how Canada should be exporting more clean power to the United States. Do you agree?

STEYER: I am so thrilled about that. Steve Chu is exactly right. It would be absolutely fantastic if Canada were to take advantage of its many hydro and wind energy opportunities and send us clean energy. The United States and Canada have cooperated on other issues in the past, dealing with pollution, including acid rain and the hole in the ozone layer. There’s absolutely no reason we can’t cooperate successfully again. And this (increased Canada-U.S. clean power trade) would be very good for the Canadian economy and the U.S. economy.

BERMAN: What, in your view, is the definition of a good corporation? Is there any such thing?

STEYER: A corporation is just a shell. It’s a legal entity. The people and culture within it need to take into account more than just the bottom line. A good company is also thinking about the human and environmental costs of what you are doing.

BERMAN: We’ve talked previously about your philosophy of the intersection between policy, technology and finance. Can you articulate that a little bit for readers?

STEYER: I always argue that I am standing up for three things, which everyone in the United States claims to support but which in fact they don’t always support. One, we are standing up for democracy. Basically, we want this to be a broad-based societal conversation where citizens get to vote. That is the way that we do massive social change in the United States. We believe there has to be a political change to put these policies in place, and that can’t be done secretly. It has to be done through conversations that involve all American citizens. Second, we believe that once those policies are in place, that the private sector will be the engine for carrying out the innovation and the transformation that is necessary. They’ll make a lot of money doing it, and that’s great. Third, we believe in full cost accounting. It’s the old computer saying “garbage in, garbage out.” If you don’t put all the information into the computer, it will optimize the wrong thing; it will give you the wrong answer. That’s what we argue is happening now. Basically, we are not including all the costs. We are not including the cost of pollution and therefore we’re optimizing the wrong answer.

STEYER: It is happening. If you see where people are investing their money, the fact is there are a lot more cleantech jobs being produced than there are fossil fuel jobs in the United States – a ton more. Money is growing in clean energy and cleantech, and fossil fuel investments are increasingly getting terrible returns. So the question is not whether this is happening or whether it is going to happen. It is happening. The question for both of our countries is pace.