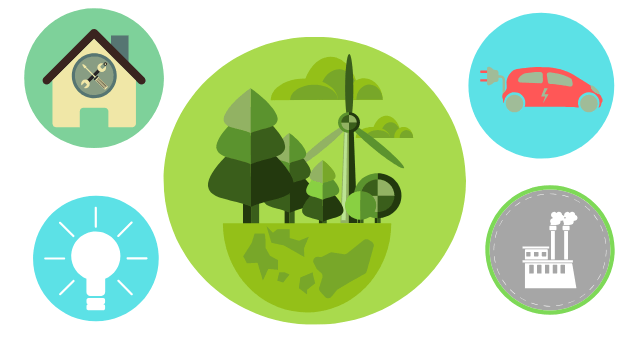 So this week, Corporate Knights is beginning to attach dollar values to that opportunity, based on an assessment of five major sectors: buildings, transportation, electricity, heavy industry, and oil and gas.

In each, we quantified the likely level of business-as-usual capital investment in the six-year period from 2020 to 2025. We then quantified the incremental clean investment (ICI) that would be required to turbocharge demand for viable decarbonization options in sectors with the greatest greenhouse gas emissions.

Under the logic of “what gets funded gets done,” we propose a six-year time-bound clean stimulus program to cover the lion’s share of the incremental clean investment, estimated at 2% of GDP per year. The war chest to provide the clean stimulus could be most logically financed via a Canada green bond borrowing program averaging just under $50 billion per year over the next six years. To put this number in context, Scotiabank’s economists are calling on the federal government to undertake up to a $100 billion per year stimulus program to counteract the coming economic contraction. Directing half this amount toward a clean stimulus is ambitious and aspirational yet realistic.

We would expect a modest increase in Canada’s debt-to-GDP ratio, which could be mitigated from incremental tax revenues resulting from additional GDP growth that the stimulus would spur. This stimulus package would drive demand at scale to deploy a host of decarbonization technologies economy-wide, with significant knock-on effects including hundreds of billion of dollars of GDP growth and hundreds of thousands of new jobs, not to mention getting us 70% of the way to our 2030 Paris carbon reduction targets by the end of 2025. It would also place Canadian industry at the forefront of a large growing global market for low-carbon solutions.

The Capital Plan for Clean Prosperity demonstrates that transitioning to a low-carbon economy is less about “shutting down” than it is about retooling, diversifying and growing, especially in the oil sector, which offers the biggest carbon savings bang for buck, and where production costs per barrel will be critical to remaining competitive. The benefits of doing so can be remarkable. You can read a summary below, and you’ll find more details on the Corporate Knights website.

Regardless of which party is elected later this month, the time for baby steps has passed. A targeted clean stimulus of this magnitude will bring about rapid economic growth and realistic greenhouse gas reductions that Canadians of all political stripes can get behind.

Of the five sectors assessed by Corporate Knights, building construction and retrofitting – both residential and commercial – represents the biggest GDP growth opportunity.

Business-as-usual investment in the building sector will top out at more than $795 billion from 2020 through 2025. We estimate that an incremental investment of 10% on top of this targeted at developers for new builds and contractors for retrofits would be sufficient to bring a quarter of Canada’s commercial and residential buildings to a zero-carbon ready standard by the end of 2025.

This incremental investment of $78 billion over the next six years could be part of a clean stimulus administered under a Zero-Carbon Building Fund targeting:

The combined GDP impact of this ICI could be as high as $314 billion, while job growth would be roughly in the range of 154,600–183,400 over the period. Notably, about half of the ICI would be directly offset by savings from reduced energy costs. Governments would also benefit from increased tax revenues in the range of $26 to $102 billion over the six years.

You can read a more detailed overview of the building-sector impacts and outlook in this article. See also: comparable assessments of the transportation, electricity, heavy industry, and oil and gas sectors.

Rounding Out the Rest: Jobs and GDP Growth in Four Other Sectors

The building sector is a standout in terms of the positive impact on GDP growth that an ambitious but realistic stimulus program would drive. But the economic potential is significant across all the sectors Corporate Knights assessed, as summarized below.

Our detailed building sector analysis has already been released, with analysis for the rest of the sectors to be rolled out over the course of this week.

Note: Numbers may not add up exactly due to rounding.