As a sustainable investment advisor, I’ve had the uncomfortable job of sitting with climate activist clients as we open up their portfolio to find Exxon shares front and centre. Exxon Mobil Corporation (XOM) is one of the biggest companies in the world and so it tends to have a prominent place in the top ten holdings of most standard funds.  It’s a bitter pill to swallow for the climate conscious, since Exxon has one of the largest carbon footprints on the planet.

Environmental advocates have had good reason to scorn Exxon at least as far back as 1989, when the Exxon Valdez spilled roughly 11 million gallons of oil into Alaska’s Prince William Sound. More recently, a 2015 investigative report from Inside Climate News revealed that Exxon scientists knew about the climate impacts of fossil fuel use back in the 1980s and undertook a massive lobbying and advertising campaign to sow seeds of doubt and uncertainty around the science of climate change. 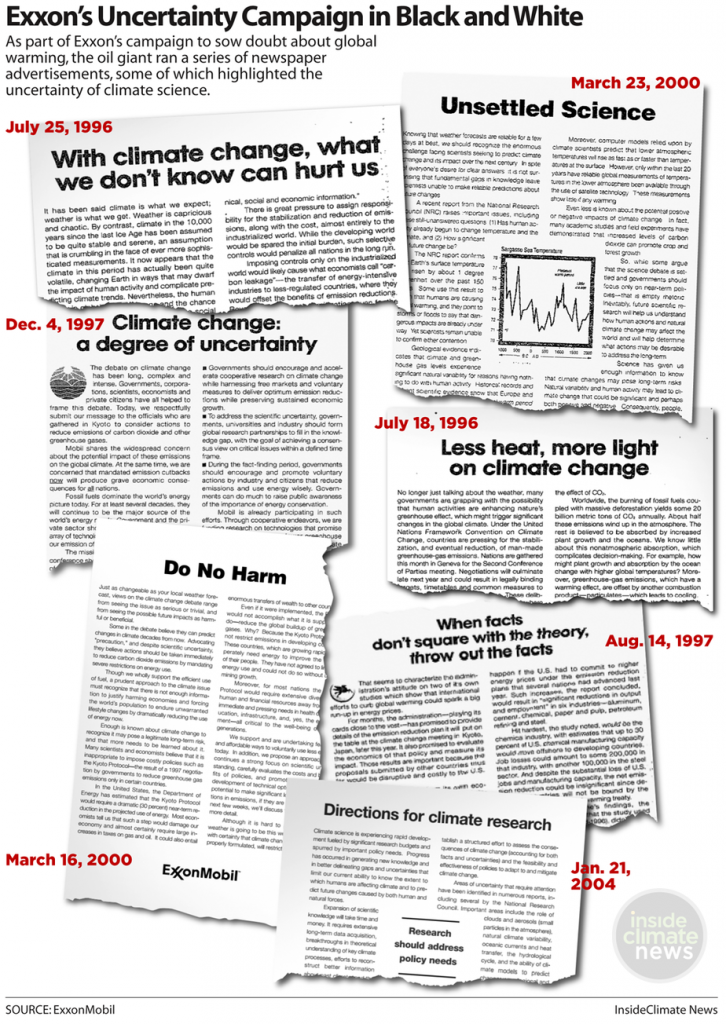 Exxon is facing numerous lawsuits from cities and states across the U.S. who want the company to pay up for climate adaptation measures.  The lawsuit that I’m tracking most closely comes from the state of New York State’s Attorney General, which argues that Exxon misled investors by failing to accurately disclose and incorporate climate change risks into its business decisions. At Exxon’s annual general meeting coming up at the end of the month, New York State’s Comptroller and the Church of England will be voting against the company’s board in what has become, as Forbes put it, “a referendum on Exxon’s paltry engagement with investors on climate risk.”

Exxon was also hit with another climate risk-related investor suit this month (the third so far). It’s impossible to guess the liabilities from these lawsuits, but any ruling against Exxon will have a negative impact on its share price (which have tumbled ever since the price of oil collapsed in 2014).

Curiously, Exxon’s latest strategy has involved pledging to donate US$1 million towards a Republican-backed pro-carbon tax plan. Forgive me if I’m not impressed. Thinkprogress.org reported that the plan would end other regulations on carbon emissions and protect oil companies from further lawsuits. have declared they’ll vote against the board.

I will give Exxon credit for one tiny glimmer of green. It recently announced a $100 million joint partnership with the U.S. Department of Energy to fund research and development into breakthrough technologies to improve efficiencies and reduce carbon emissions. However, the cynic in me knows that $100 million is a drop in the bucket for a company that made over US$285 billion in 2018, and that this strategy falsely presumes that we don’t already have all the technology we need to transition away from fossil fuels.

Knowing that many investors want to ditch their shares in Exxon, Corporate Knights’ research team and I started looking for the most sustainable fossil fuel company on the stock market. We found Neste (NTOIY), a Finnish oil refiner that is now redefining what an energy company looks like. Although it still earns most of its revenues from oil refining and gas stations, biofuels like renewable diesel are now the fastest growing part of its business, comprising half its total profits. Its biofuels are made from a combination of waste sources (animal fat and used cooking oil) and plant sources (rapeseed oil and palm oil).

Because of concerns around natural forests being cleared to make room for palm oil plantations, Neste has been working to decrease the percentage of palm oil in its formula and claims to be using 100% certified and traceable sources (it even discloses the exact coordinates of all of its supplier mills). Still, environmentalists have raised concerns about state-owned Neste buying from an Indonesian supplier that has been repeatedly caught using illegal rainforest harvests. Neste has said it considers the sustainability of its supplier to have been “sufficiently restored,” but full transparency: palm oil does remain a liability for Nestle.

I really like renewable diesel as a transitional renewable energy source since it can fuel any regular diesel engine. It’s a much easier sell since companies don’t have to spend money to upgrade vehicles. Renewable diesel also fits in nicely with European Union fuel standards that require reductions in CO2 emissions and air pollution, which should give Neste a leg up. Though Neste will have to keep an eye on the fact that E.U. is planning on phasing out palm-oil derived biodiesel from transport fuel by 2030.

On the bright side, Neste is investing heavily in the growth of its renewable division, announcing a $1.8 billion biofuels production plant in Singapore. I’m also excited that they’ve started producing renewable jet fuel that will drastically reduce emissions in the aviation sector. It’s no surprise to me that Neste was named #3 on the 2019 Corporate Knights Global 100 Most Sustainable Corporations in the World list.

I’m not the only person who’s excited – investors have sent the share price soaring over the last five years. Some will argue that Neste is currently overvalued, and they’re not wrong. However, there’s still lots of room for the company to grow as the world shifts away from fossil fuels towards renewable sources.

If you’re looking to divest your portfolio from fossil fuels entirely, Neste may not be the company for you. But by showing the world how an oil and gas company can successfully transition into a renewable energy powerhouse, Neste wins this week’s Sustainable Stock Showdown. 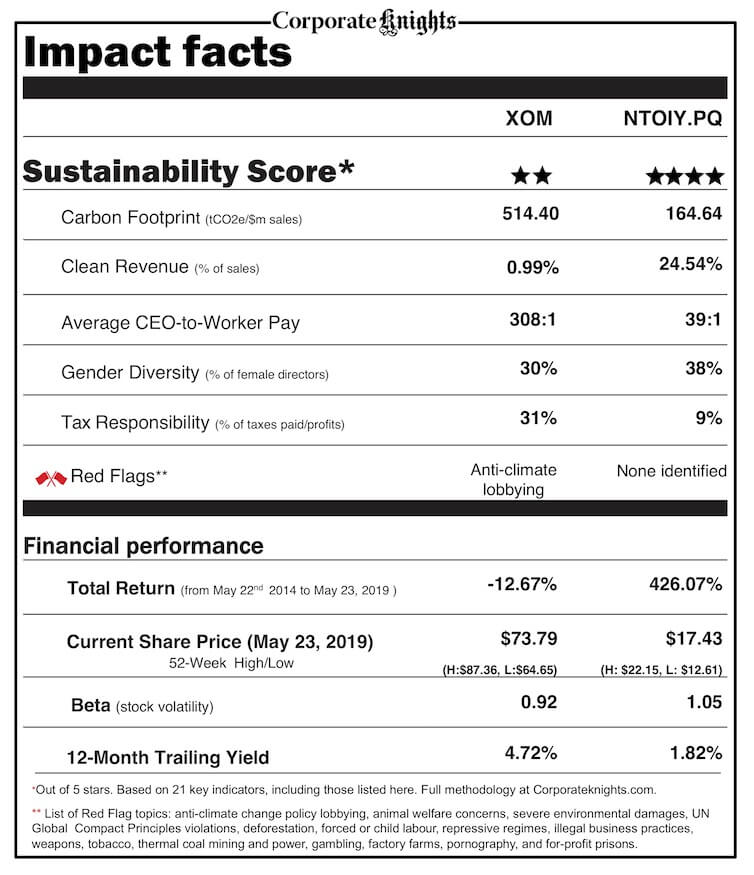 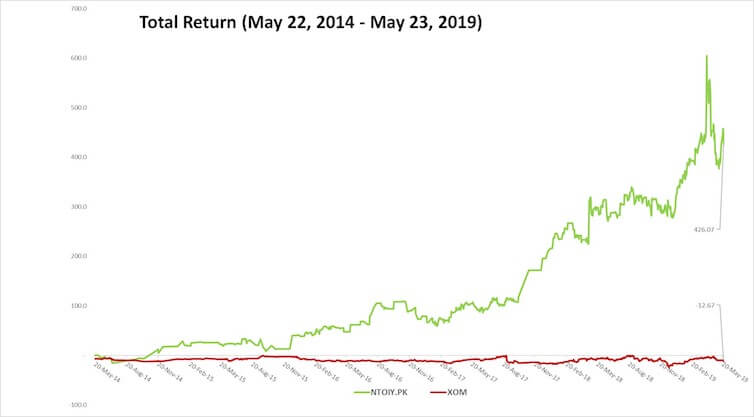