Research results, some of which are rooted in a future that doesn’t yet exist, project bold environmental benefits — from fuel economy improvements of more than 50 per cent for cars and trucks to lowering vehicle carbon emissions by more than 90 per cent in scenarios that call for replacing personal cars with robo-taxis. But reaching such significant environmental benefits will mean big changes to the current way of doing things.

Before we are able to create vast networks of autonomous taxi fleets to squeeze the biggest benefits out of automation, we will likely see smaller fuel savings and emissions reductions as automation reduces or eliminates inefficient human driving habits in each passenger car and truck. But the benefits won’t come only from the performance of individual cars. They also will be connected to the creation of a wireless communication network that enables robotic vehicles to relay and receive information that helps them operate efficiently.

“If you have a fully autonomous car that talks to other cars and traffic signals, then it can drive more smoothly, much better than a human can, and there will be fuel economy benefits coming out of that,” says Dave McCreadie, Ford Motor’s general manager of electric vehicle infrastructure and smart grid.

Autonomous car research has been around for more than four decades, but the concept now appears within reach, thanks to today’s faster and smarter computers. Executives at Nissan, Tesla Motors and Google have talked about launching autonomous cars in the next five years. and the Institute of Electrical and Electronics Engineers predicts they will make up 75 per cent of vehicles on the road by 2040. 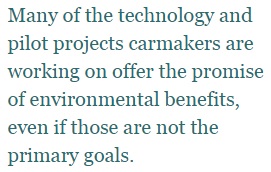 Cars already are becoming increasingly automated with features such as blind spot detection, GPS mapping and assisted parking, where the car parallel parks on its own. And carmakers are experimenting with various image-capturing technologies to equip a car with the ability to scan its environment and make good driving decisions, which is what carmakers point to — not the environmental benefits — as the reason they are interested in developing robotic vehicles. If the car can make better decisions than a human driver, then it will be able to better avoid accidents.

Still, many of the technology and pilot projects carmakers are working on offer the promise of environmental benefits, even if those are not the primary goals. Key research themes — designed mostly to deliver safety, convenience and comfort — include advancing the use of sensors and software to eliminate unnecessary acceleration and braking, relay traffic data to help cars find the quickest routes, minimize extra driving to find parking, and dispatch and manage a taxi fleet to more efficiently get cars to customers and customers to their locations. All this helps cars achieve greater fuel economy and eliminate unnecessary or excessive driving and its associated emissions.

For personal cars and trucks, automation could deliver around 15 per cent in fuel savings by maintaining optimal speed and avoiding excessive stop-and-go or idling, according to a paper by the National Renewable Energy Laboratory and the University of Maryland. Meanwhile fuel efficiency could be boosted more than 30 percent by enabling cars to communicate with each other in a way that eliminates the need to stop and go at intersections, according to research published by the Society of Automotive Engineers.

“People are always driving somewhat inefficiently because they are constantly pushing the accelerator pedal and then backing off. People usually brake more rapidly than would be optimal,” says Dave McCreadie, Ford Motor’s general manager of electric vehicle infrastructure and smart grid. “When you have cars that can anticipate traffic lights and operate safely, then you can get a smoother operation of the vehicles from the fuel economy perspective.”

Technology already exists to help drivers gain some of those fuel savings. So-called “eco mode,” available in many cars today, makes little, automatic tweaks to the car’s performance to use energy more efficiently, delivering up to 10 per cent fuel savings. But that’s only if the drivers are willing to turn on the function, which can make the car feel sluggish.

Relaying traffic information to help cars find the quickest routes or parking also leads to fuel savings of around 5 percent, according to the NREL paper, while also having a measurable impact on traffic management in big cities. On average, about 30 percent of the cars roaming urban streets could be looking for curbside parking, according an analysis of 16 studies of 11 cities, including New York, London and San Francisco.

In one project, Ford and Georgia Institute of Technology are developing sensors and cameras on a car that take note of empty parking spots it drives by and relays that information to other drivers nearby who need to park, McCreadie says. Another project is testing a “virtual valet” service in which a car remotely drives itself to a parking garage after the driver steps out

Some of the ideas for saving fuel and reducing carbon footprints require a less complex technology, regulations and human management behind the scenes.

Take the concept of platooning, where cars or trucks follow each other closely at a constant speed, reducing air resistance, or drag, which improves fuel economy. Humans aren’t so good at maintaining a safe distance over a long haul, and having a series of vehicles following each other safely presents an even greater challenge.

A 2013 study by the North American Council for Freight Efficiency exploring the advantage of platooning in semi trucks demonstrated fuel savings of 4.5 per cent for the lead truck and 10 per cent for those that followed (when the trucks are in the platoon formation; overall fuel conservation for a truck from start to finish would be lower). The experiment automated the platooning function by installing radar-based sensors — to monitor speed and distance — and wireless communication equipment in regular trucks to allow them to maintain a 36-foot distance.

Big rig fleet owners are keen to find any meaningful way to save fuel, which can account for nearly 40 per cent of a fleet’s operating cost. Heavy-duty trucks account for only 4 per cent of the registered vehicles on the road but about 25 per cent of the fuel use and greenhouse gas emissions in the transportation sector.

Creating platoons of big rigs across America’s highways will require fleets from different companies to communicate with each other, meaning common technical standards for communication equipment and universal protocols will be crucial. If it works out, the final result will be something that resembles freight trains on highways.

“You need enough critical mass and market impetus for these companies to share open data,” says Jon Walker, manager of the transportation group at the Rocky Mountain Institute, a nonprofit that promotes sustainable resource management. “It should be like the Internet, where everybody wants to be able to do this.”

Perhaps the biggest environmental benefit that can be gained from smart cars involves breaking up the car ownership culture and replacing it with a seamless and affordable autonomous taxi service that dispatches robots to whisk people to their destinations, whether work or a weekend getaway, picking them up and dropping them off much as a bus would, but with personalized, convenient stops.

About 96 per cent of the cars on the road are privately owned, notes Jeffery Greenblatt, a scientist in the sustainable energy systems group at the Lawrence Berkeley National Laboratory. These personal cars are parked and unused 95 per cent of the time on average. Because they would reduce the need for individual car ownership, autonomous electric taxis would make a big dent in carbon emissions tied not only to car use but also to car manufacturing, says Walker. Also, in an automated fleet of ride-sharing vehicles, managers can program fueling, dispatch, mapping and driving schedules and operations more efficiently than human drivers can — not only making autonomous taxis a convenient option for consumers, but also reducing overall miles traveled and so carbon emissions.

“We see automated mobility as a service,” Walker says. “You can sign up for a mobility service and get a pickup truck for going to the hardware store, an SUV for going to the mountains and a cozy one for going to work. By 2030, not many people will own any cars at home.”

Greenblatt recently co-authored a paper to quantify the environmental benefit of running fleets of autonomous taxis. His modeling shows that the use of autonomous electric taxis powered by renewable energy sources such as solar and wind, could lead to an 87–94 per cent cut in per-mile greenhouse gas emissions. The modeling also assumes that taxi operators will dispatch a greater variety of vehicles to meet personalized demand — smaller and lighter cars that require less fuel for one or two passengers and larger cars for more people and cargo — thereby lowering fuel use and emissions.

Reducing carbon emissions through the use of autonomous taxis will face significant challenges, however. Improving battery technology to extend electric cars’ range and having a broad network of fast-charging stations will be crucial for long-distance travel and for convincing consumers that they could ditch their own cars without sacrificing convenience and comfort.

Changing the current taxi business model will also be necessary. Walker points out that because taxi owners pay for the cars while the drivers pay for the fuel, owners have little incentive to pay for, say, a Tesla Model S, even though driving a Tesla today should cost less for a taxi driver than operating a gasoline car. He’s working on putting together pilot projects to prove that. Meanwhile, Uber is testing a fleet of BYD electric cars in Chicago.

Overall, autonomous car technology promises to deliver significant environmental benefits. The questions is whether those benefits will be realized and at what pace. That’s difficult to say, says Maarten Sierhuis, director of the Nissan Research Center in Silicon Valley.

“Scientists use simulation and a lot of assumptions in their models in order to predict what the savings would be,” he says. “The question remains if the assumptions are correct. First we have to develop the technology, and once we can prove that it works, then we will study how to use this technology to accomplish efficiency.”