Most people feel reassured by the home insurance policies in their filing cabinets, assuming that any massive damage to their home will be covered. But many Canadian may not realize that Canada is the only G8 country without overland flood insurance, which happens when waterways overflow into houses through doors and windows.

An analysis by Munich RE, a German reinsurance company, shows that floods have become a major source of property loss over the last 20 years, but insurance companies are picking up less of the bill. A report by Ceres, published last week, shows that this is a trend worldwide for all types of property damage. 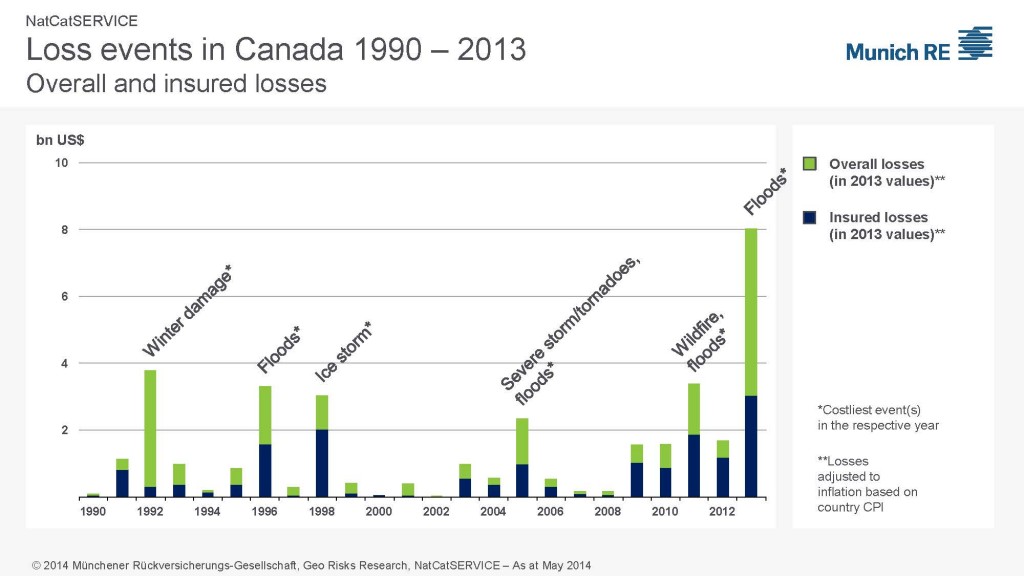 The good news is that the Canadian insurance industry is already working with federal, provincial and municipal governments to close this gap in coverage before it becomes an even bigger problem.

The worry is that government subsidies for flood protection will underprice risk and send the wrong message to homeowners.  The key is to figure out a way to make flood insurance affordable without giving people the impression that it is ok to live in flood plains. Our neighbours across the border are providing a poignant lesson in what not to do, but the perfect national flood plan still evades us.

Why Canadians can’t get covered

Canadians have never had access to overland flood insurance because, until recently, it was only a risk for a small percentage of people who lived near water. This means the costs were not shared widely enough to make it affordable, said Leonard Sharman, senior advisor for media relations at The Co-Operators, a Canadian insurance co-operative. This logic harkens back to the days when home insurance was called “fire insurance” because fire was the biggest threat to your home, he said.

A report by the Insurance Bureau of Canada shows that extreme weather has surpassed fire as the leading cause of property damage, with payouts more than doubling every five to ten years since the 1980s.  For the past four years, payouts for extreme weather have been above $1 billion per year with a record-breaking $3.2 billion in 2013, mostly due to flooding in Alberta and the Greater Toronto Area. Further studies warn that rapid sea-level rise caused by climate change could result in three-times more flooding in the coastal areas.

If your home is flooded in Canada, the federal and provincial governments will likely pick up the bill, although they are not obliged to do so.  The frequency and severity of loss since 2013 showed the government and the insurance industry that something needed to change, said Sharon Ludlow, President, Aviva Insurance Company of Canada.

Finance minister Jim Flaherty announced in the 2014-2015 federal budget that the government would work with the insurance industry, provinces and territories to “explore options for a national approach to residential flood insurance.”

This is a messy task that will require all levels of government, insurance companies and homeowners to work together, said Glenn McGillivray, managing director of the Institute for Catastrophic Loss Reduction, a not-for-profit research institute funded by the property and casualty insurance industry.

The Federal Emergency Management Agency (FEMA) gives millions of American insurance policies that are about half the price of insurance company rates, but massive property losses over the last decade left the agency $24 billion in debt in 2012.

In 2013, Congress passed the Biggert-Waters Flood Insurance Reform Act, which allowed FEMA to align its rates with those of insurance companies. In some cases, home insurance rates went up thousands of dollars, causing a backlash from homeowners. Congress immediately started back-pedaling by drafting a new bill to delay the implementation of the act until after the National Academy of Sciences could spend two years studying the issue.

A national conversation about flood insurance gets to the heart of our fears about climate change: that this problem may force some of us to change our lifestyles, and even leave behind our homes and communities.

Staten Islanders in New York City know this fear better than anyone. Two years after Superstorm Sandy hit the northeast coast of the United States, they now are deciding whether or not to sell their homes to New York State, which wants to use the shoreline as a buffer for extreme weather. The state has earmarked about $200 million to buy-out homeowners in three Staten Island neighbourhoods, which make up about 550 acres of property.

“We are going to demolish the homes,” said Barbara Brancaccio, a spokeswoman for Governor Andrew Cuomo’s Office of Storm Recovery told NPR on Wednesday. “Essentially, they go back to nature,” she said.

Some people may argue that it is damaging to move communities out of flood plains, but it’s equally damaging to let their homes flood year after year and expect tax payers who live elsewhere in the country to prick up the tab, said McGillivray.

Aside from moving to a less flood-prone area, the only thing homeowners can do to protect their livelihoods is make sure they have fortified their homes to deal with floods and make sure they understand their risks, said McGillivray.

“A person may be able to say honestly that they did not know they were in a flood plain, but that only works once,” he said.