The City of Toronto is aiming to capitalize on an untapped natural resource. By installing a sawmill in one of its wood lots, the city is hoping to turn trees that would normally be considered waste into lumber.

“We will now be able to talk to manufacturers and say ‘You want wood? How much?’” said Robert McGonagle senior advisor on the green economy at the City of Toronto.

The project is starting small by working with local designers. But already, the city is finding that this is more than a potential source of revenue – it is also a sustainable, premium product for those who make wood products in the area.

The city currently gets nothing back from fallen or felled trees. And while most of the wood is not high enough quality to sell to woodworkers or manufacturers, a certain amount of it can be processed into lumber, said McGonagle.

The average cost for the City of Toronto to take down a tree is about $130 per tonne, and an average tree weighs three to five tonnes, said McGonagle.

That cost will only grow as the the city is expected to lose a significant portion of its urban canopy to the Emerald Ash Borer, an insect from Asia that attacks and kills all species of ash trees. The City of Toronto estimates that it has 860,000 ash trees throughout the city – most of which are expected to die between 2015 and 2017.

The City of Toronto is aiming to launch the pilot project later this month to test the market for urban wood and to iron out the details regarding how sales could work, said McGonagle.

“We’re looking at how to create economic value from trees that come down in the city. We want to look at the full set of opportunities,” he said.

Toronto is leading the pack in North American when it comes to making use of urban wood resources, said McGonagle. While it is standard practice in Europe to create lumber from urban trees, there is a general sense in Canada that “we don’t do stuff like that in the city,” he said.

IIDEXCanada, a national design and architecture exhibition taking place this week in Toronto, is an opportunity to showcase the designs of local woodworkers and to show others that urban wood is as good, if not better, than traditional wood, said Mingay.

So far, this process has shown that urban trees are actually better for producers of wood products because they have more character, said McGonagle. Trees in forests grow straight, while trees in the city are forced to adapt to their surroundings, thus creating more features in the grain of the wood, he said.

Blair Baker, a woodworker from Pickering, Ontario, agreed that the wood he collects from the municipal wood lot results in more interesting products than regular lumber.

Baker was working as a maintenance worker for the City of Pickering when he pointed out that he could make something beautiful with the trees that were headed for the chipper. “[The city] said knock your socks off,” he said. Baker now makes furniture from urban wood in his spare time and has started a company called Baker Brothers.

The three stools he had on display at IIDEXCanada were made from the trunk of a single ash tree that came down in Pickering during last year’s ice storm. 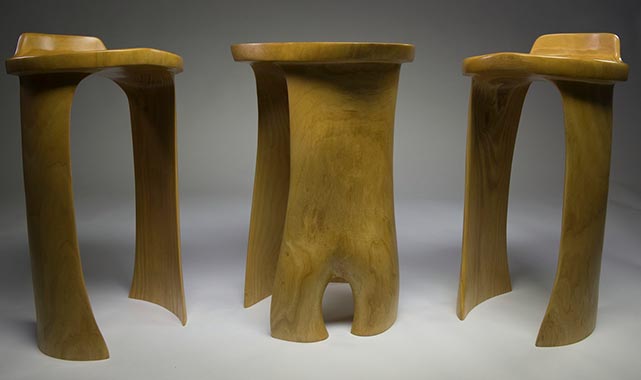 His work shows that ash wood can make attractive and durable products, even after it has been infested. “It is still solid and very workable. It’s incredible wood, so why not use it? It’s going to die anyway,” he said.

Baker said he was looking forward to the the City of Toronto’s pilot project because it would help him access more urban wood, which is sometimes hard to collect due to legal concerns around the safety of third parties at municipal wood lots.

Mike Sharpe, a Toronto-based woodworker, collects his own wood from the backyards of houses in the Greater Toronto. Knowing exactly where a tree stood, and what tree the wood comes from gives you more creative possibilities, he said.

The one-of-a-kind nesting benches on display at IIDEXCanada fit together to recreate the original form of the tree. This would be almost impossible to achieve using wood from a traditional lumberyard, he said. You might get lucky and find two pieces of wood from the same tree, but the chance that they would fit together perfectly is almost unheard of, he added. 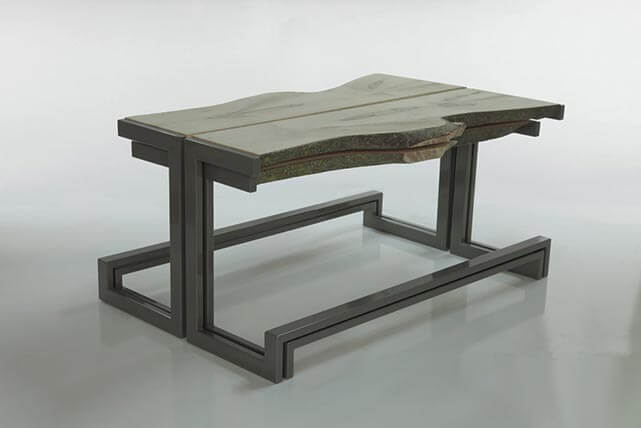 Aside from the aesthetic advantage of handpicking raw materials, Sharpe said he aims to create products that are imbued with meaning for his customers.

“One of the main functions of our business is to try to maintain the connection that people have had with a tree, which may have been in their lives for a long time,” he said. That is the meaning behind Storyboard Furniture, he added.

The City of Toronto’s pilot project is a wonderful idea because the city produces far too much wood for a small company like Storyboard Furniture to absorb, he said. He said he hopes that every designer in Toronto will choose to work with urban wood.

McGonagle also expressed excitement about the creative opportunities that an urban sawmill could provide for local woodworkers. But as the person responsible for developing Toronto’s green economy, his interests are more pragmatic: “This is a huge opportunity as a revenue source for the city,” he said. “Why shouldn’t we be selling our natural resources?”