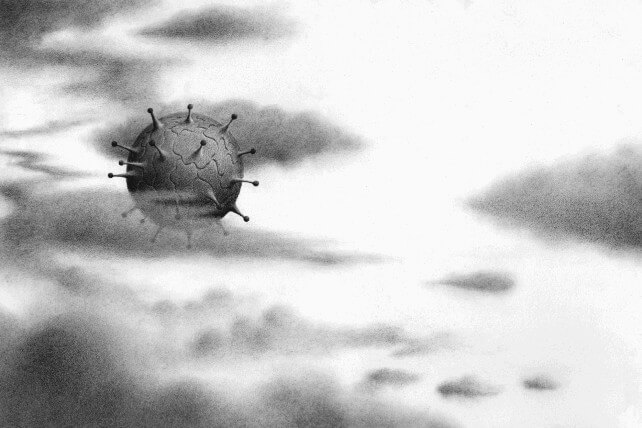 Every disaster movie starts with someone ignoring the experts. Scientists point to an impending threat with increasing alarm, but to the public the threat feels abstract, distant. Until it reaches a tipping point and suddenly everything changes. Almost overnight, COVID-19 exploded from WHO discussion rooms to shatter the global economy and upend our social lives. It’s an example of “systemic” risk, where nature shifts otherwise unseen boundary conditions under which we operate. Assumptions underpinning everyday security are betrayed. COVID breached an invisible line between us and pathogens. Nature’s back in the driver’s seat. We’re humbled, no longer in control.

The good news is that humility brought massive changes in behaviour to limit the risk and unlocked enormous public and private resources to resolve it. Social distancing buys time. A vaccine puts the boundary back in place. Our collective response is a moral one: we took on staggering costs in the blink of an eye to protect ourselves. A united public sector is arbiter of that moral dimension. It defines the framework by which we act, and only it can provide the foundation upon which the economy recovers.
That unlocks a once-in-a-lifetime opportunity: as the global corporate world leans – once again – on the public purse for recovery, we might demand in return a renewed “climate capitalism,” a sustainable economy built for the 21st century.

Climate risk looks a bit like COVID-19, if you squint. Climate risk is the mother of systemic risks. We’re changing the planetary-scale boundary conditions under which civilization evolved: the patterns of weather and water that dictate how we get our food and where we build our cities. Inaction on climate risks our security, civic infrastructure and institutions. The response to climate risk is thus also a moral one: we act to keep ourselves safe. The public sector is director of the show, the private sector its actors.

COVID’s threat feels closer than climate, though – right? That’s why we called a political truce and acted with urgency. We want to protect our aunts, dads and friends – today. And climate’s still way over the horizon. Well . . . did COVID feel so immediate a few months ago? The risk of a pandemic was always there; we just ignored it. And the climate threat feels less distant with each new firestorm, flood or drought. Ask an Australian how up-close and personal climate risk feels, or someone whose home burned in Fort McMurray or California. A new generation, led by Greta Thunberg, certainly feels an immediate sense of insecurity.

There’s one crucial difference no amount of squinting can reconcile. Worst case on COVID is we screw up on social distancing but still resurface in a year or so when a vaccine comes along. We can fail on COVID and recover. Failure on climate is forever. There’s no putting planetary boundaries back once they shift to more energetic and dangerous states. It’s a one-way trip. There’s no equivalent of social distancing to buy time, marshal resources and plan a counter-attack. So we have to invent a vaccine in advance. That’s climate capitalism: a vaccine to anticipate climate risk.

Left and right united under COVID – Trudeau and Ford working together! – because people won’t tolerate leadership that can’t protect them, whatever their political stripes. You don’t have to be a lefty to appreciate a strong public sector today. Neither must you be a Wall Street titan to understand market forces; big corporations and private capital are powerful tools to solve wicked problems – if given focus. We see that with COVID: the private sector scales up needed tech – tests, vaccines, treatments – when coordinated and incented by the public sector. Climate capitalism is no different: the private sector can and will act decisively on climate but only when incented and directed by an empowered and united public sector.

But on climate the political divide grows wider. Many on the far left – led by Naomi Klein – blame capitalism itself for climate risk and would have us throw it out. This is misguided in three ways. First, we can’t possibly rebuild energy systems without private capital, innovation and all the complex activity only markets can organize.

Greenhouse gases aren’t DDT – you can’t just ban them. Second, radicalizing the politics of climate hinders the work of building the large tent needed for decisive action in a democracy. Third, it sets arbitrary limits on what capitalism can look like. If Klein’s target were limited to American-style free-market fundamentalism, she’d have many allies, including me.

On the other side of this cultural divide sit reasonable people, civic and business leaders who understand that climate risk is real but prefer an incremental approach. They fear radical intervention in the economy. Instead, it’s proposed we nibble around the edges. That too is misguided – a bit like lifting COVID’s social distancing restrictions too soon because you fear short-term pain. The reduction in risk is illusory. It’s the long game that matters. It’s too late to nibble around the edges; only deep, radical cuts in emissions will do. Incrementalism feeds into Klein’s radical narrative: “See? Capitalists won’t do what’s necessary. Let’s bring it all down!

Nothing can redeem COVID. But it offers us a once-in-a lifetime window to fund that vaccine.

Capitalism isn’t monolithic. It means different things to different people. For an ordinary person, it might mean owning your own bakery, working for options in a tech start-up or watching your RRSP grow so you can retire in comfort. It can mean Russia’s anarcho-capitalism, Indonesia’s crony capitalism or China’s state capitalism. Sweden is as much a capitalist country, on this view, as America. There’s no preordained role for the public sector. Roosevelt’s New Deal didn’t make the U.S. any less capitalist. Nor is private capital sacred – it moves under a legal framework that citizens endorse. There’s no predetermined moral dimension: it’s neither good nor bad, but reflects human complexity.

Climate capitalism is a rewiring of the economy using whatever works to put a cork in emissions – whether they come from the left, right or anywhere else. Economic radicalism is not the same thing as political radicalism. We harness as many existing institutions as possible for the sake of expediency. We don’t throw out the machinery of capitalism; we replace the fuel.

Twenty years ago, the story would start and end here: price carbon – start low, ratchet it up slowly, keep it revenue-neutral so it’s not a government cash grab. Sit back and watch the market work its magic. Optimally efficient, it’s the incrementalist’s dream! Unfortunately, it’s too late for that soft landing. If your house is on fire, you don’t care if the hose leaks; you just want lots of water. Speed matters more than efficiency.

We need shortcuts – even if they’re less efficient. Here are some ideas.

Has anyone fought an election over efficiency regulations? Car mileage standards or the carbon content of fuel? Sustainable energy professor Mark Jaccard points out that the heavy lifting on emissions reductions thus far, whether in Canada or California, was borne by regulations. Many define an outcome – say, energy use in buildings – without defining how to get there. Jaccard calls them “flex-regs.” Fast, effective, often under the political radar.
Remember “Own the Podium” back in the Vancouver Olympics? We picked athletes who competed at an international level and gave them resources to train. Do the same for cleantech. Back companies with demonstrated traction in global markets with loan guarantees for production and project finance. Today, old stuff gets cheap capital, new tech doesn’t. Let’s flip that around. This isn’t the government picking winners; it’s the government backing winners – a big difference.

Teach young CFOs that energy costs are of strategic importance. Why? Because capital budgets are reserved for core investments – more T-shirt machines for a T-shirt company, bigger holes in the ground if you’re a miner. Energy retrofits are stuck begging from operating budgets, which means they need paybacks in a year or so. Most efficiency fruit remains unpicked, across the economy. Yet rare is the CFO who gets more than 15 to 20% on core capital, and efficiency pays twice that! No policy required, just fresh thinking.

Fund low-carbon infrastructure with green bonds, with a twist. The government raises cheap capital with a Canada Savings Bond–like instrument. The private sector bids on the right to deploy it. A public mandate incents those private money managers with a single metric: maximize carbon reduction at minimum cost to Joe Public. A green bank, done right, combines the public cost of capital with the private sector’s nose for profit.
Finally, use the most powerful institutions we have. We gave up a degree of sovereignty to the World Trade Organization. It has real teeth that impinge upon national governments. Leverage those teeth. The WTO (and World Bank and IMF) reflects the priorities of those who negotiated it. If Trump can upend NATO, imagine how an empowered group of national leaders might reform the WTO to level the playing field between countries by forcing climate laggards to bear carbon tariffs.

Nothing can redeem COVID. It’s a nasty little thing. But maybe it’ll help us hear experts on climate risk and reconcile the priority of long-term stability over short-term cost. We might also use the strongest public hand we’ve had in a long time and write a new climate contract between citizens, our governments and the private sector. If so, we’ll emerge the stronger for COVID, however horrid its impacts.

Tom Rand is a cleantech investor and author of The Case for Climate Capitalism: Economic Solutions for a Planet in Crisis.