When researchers estimate the lifecycle emissions of conventional vehicles – that is, the total pollution they produce, from manufacturing through usage to disposal – the results generally follow the 80-20 Pareto principle. About 80 per cent of emissions come from burning fuel, and 20 per cent from making the vehicle.

This rule-of-thumb breaks down for electric vehicles (EVs), partly because it takes extra energy to manufacture their batteries but mainly because electricity can vary from ultra-clean to uber-dirty.

To help readers determine how much cleaner plug-in cars would be over their petroleum counterparts based on where they live, Corporate Knights has compiled the grid emissions intensity for every Canadian province and American state (and the District of Columbia). We then compared the per-mile emissions for the Nissan Leaf – the world’s best-selling EV – and its combustion cousin, the Nissan Versa, based on government fuel-efficiency figures. 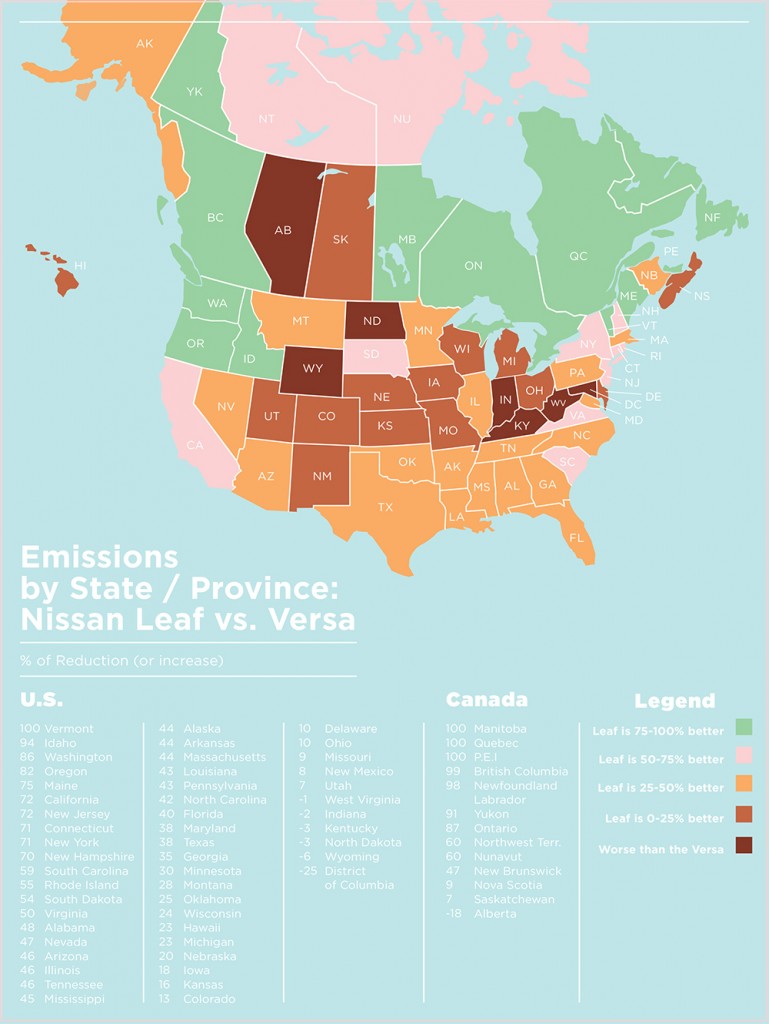 For the United States as a whole, and taking into account that coal powers one-third of the U.S. grid, the Nissan Leaf delivered a 40 per cent emissions savings over the Versa, per mile. For Canada, where the grid is two-thirds clean hydroelectricity, the savings double to 80 per cent.

Moreover, almost 80 per cent of Americans live in states where the Nissan Leaf offers better than 25 per cent per-mile emissions savings – a difference big enough to give us solid confidence that the plug-in is less polluting than its petroleum partner. And that’s before considering the bamboo-like growth rates that renewable energy is experiencing worldwide.

The aforementioned states include California, Washington, New York and Georgia, home to the five cities responsible for more than half the United States’ plug-in EVs thus far: San Francisco, Los Angeles, Seattle, New York City and Atlanta. Indeed, Nissan recently announced that Atlanta had become the Leaf’s top-selling city. So it seems that EVs are generally being purchased where they’re most effective.

In contrast, only 5 per cent of Americans live in states or districts where the Leaf’s transportation emissions prove worse than the Versa’s. This represents residents of West Virginia, Indiana, Kentucky, North Dakota, Wyoming or the District of Columbia. 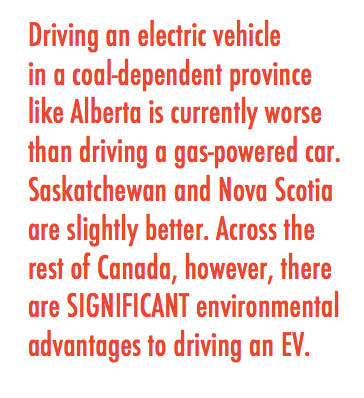 While state-by-state EV sales figures are hard to come by, the District of Columbia does hold the distinction of being the first state/federal district hosting more public battery-charging stations than gas stations. At time of writing, the margin was 121 to 85 for the plugs versus petroleum.

Continuing with the 80-20 theme, 80 per cent of Canadians live in provinces or territories where the Leaf’s per-kilometre emissions reductions amount to 60 per cent or more. And fully 40 per cent of the country live in five renewables-dominated provinces where per-km emissions are reduced more than 98 per cent: Quebec, British Columbia, Manitoba, Newfoundland & Labrador, and Prince Edward Island (though because these figures don’t include electricity imports, the numbers are deceiving for P.E.I., which imports a lot of coal power). These two-fifths of Canadians are responsible for three-fifths of the country’s EV purchases.

Meanwhile, the 11 per cent of Canadians who reside in Alberta would be creating more emissions if they charged EVs by plugging into the province’s coal-dominated grid. This explains why only 3 per cent of Canada’s plug-ins are sold there.

Curiously, Canadian consumers are adopting plug-in vehicles much more slowly than their American counterparts, with electrics representing about 0.1 per cent of the Canadian new car market in 2013, versus about 0.6 per cent in America. While Canada lacks federal incentives, the three largest provinces offer provincial rebates.

One possible explanation is that Canadians tend to buy less expensive vehicles than Americans, while manufacturers tend to price plug-in vehicles higher in Canada than in the United States.