With the support of Mitacs, it hired two interns – a graduate student and a post-doctoral fellow – from Professor Walter Mérida’s sustainable energy lab at the University of British Columbia.

“The flipside is we are generating people who, through their education and academic work, are getting trained in what is a pretty interesting strategic opportunity for Canada.”

Mérida, who is the director of UBC’s Clean Energy Research Centre, agrees that the internships are of tremendous value to his students.

“It is a great way to get context for the research they are doing and incorporate some of the market and policy considerations,” he says. “I think engineering and science must innovate within realistic business and geopolitical contexts.”

Mitacs has supported more than 10,000 similar internships over the past 15 years. It works with 60 universities and thousands of companies on projects in dozens of fields. Current collaborations are on everything from air quality modelling to whether cats can protect people from Lyme disease.

Mitacs is supported by the federal and provincial governments and covers half of the interns’ salary costs, which vary depending on the project.

Rob Annan, chief research officer at Mitacs, says the organization acts as a matchmaker between industry and universities, and in the process, helps make Canada more innovative. 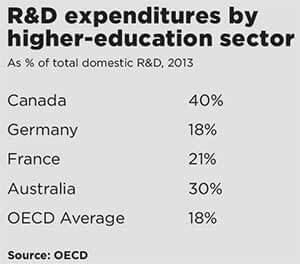 Canada’s university sector accounts for a greater proportion of R&D compared to many of the country’s competitors. But higher-education R&D spending is less likely to produce tangible innovations – new products, services or processes – than business R&D spending, says the Conference Board of Canada in its 2016 report, “How Canada Performs.”

“It is a big policy concern: Why are companies not investing? Why this underperformance? Governments look at universities and industry and say, why can’t you two work together?” says Annan.

“But there is a culture difference between the two and not a lot of existing linkages. Businesses and universities come at challenges from different angles, but there are common points, points of intersection.”

Mitacs talks to businesses to find out what the challenges are and then taps into a national network of university researchers who have the people, experience and equipment to help. Interns are the mechanism for collaboration.

Annan says many companies with no previous links to academia are surprised at the value of having a PhD student on staff. A Vancouver roofing company, for example, was able to more accurately estimate the cost of materials needed for a job because a doctoral student in computer science helped with 3D modelling. Annan says one in four of Mitacs’ industry partners created jobs so they could hire their interns.

Carbon Engineering has closer ties with academia than many of the companies that work with Mitacs. It was founded by former University of Calgary researcher David Keith, who is now at Harvard.

There are a number of processes for capturing carbon out of smokestacks. But Carbon Engineering is one of the few firms in the world that is working on what is known as direct air capture – taking carbon dioxide out of the air. If they succeed in optimizing the process and scaling it up, it could be a new tool in the fight against global warming. Finding a new pathway to synthetic fuels would be a revolutionary step forward in the efforts to shift to a low-carbon economy.

Luisa Burhenne, the post-doctoral student from Mérida’s lab, will be working on a project to look at several leading chemical pathways to convert carbon dioxide into liquid fuels.

“The goal is to produce synthetic fuels from atmospheric C02 and renewable energy,” she says.