This article originally appeared on OpenCanada.org.

Smart cities are all the rage in the early 21st century. Newly wired urban dreamscapes such as Aarhus, Barcelona, Masdar, and Songdo are routinely described as the future of city living. Politicians, urban planners and investors regularly extol the virtues of automated pollution detectors, remote sensor weather trackers, and intelligent street lighting. Futurists predict that all cities will soon be environmentally friendly and self-running systems driven by big data and cloud computing. Whether or not these prophecies come to pass, the preoccupation with cities is warranted: two thirds of the world’s population will reside in them by 2030.

Yet for all the buzz about smart cities, there is surprisingly little agreement on what they are. Most experts agree that they constitute a new kind of networked urbanism. Smart-city pundits also believe that new technologies – especially those connected to the Internet of Things (IoT) – are the defining feature. Others contend that smart cities are somehow distinct from cyber, digital or intelligent cities, though there is comparatively limited discussion of why this is the case. Taken together, there are diverse interpretations among experts and lay-people about what a smart city is, and therefor how it should be built and for what purpose it is ultimately conceived.

On the one side are technocrats who envision smart cities as futurist hubs where all core functions and services are automated. To them, city infrastructure should be purposefully networked and citizens hyper-connected. Ideally these cities will double down on soft infrastructure – fiber-optic cables, wireless networks, and e-services – in order to facilitate service delivery and maximize efficiency gains. The planning and organization of the smart city is centralized and top-down, often coordinated by public-private partnerships with leading technology firms. The point of the smart city, then, is to attract creative classes and build a productive knowledge-based economy. There are several examples of the technocratic approach in action in the North America and Western Europe.

Meanwhile, on the other side is a more humanist approach that sees in smart cities the possibility of sustainable growth across multiple sectors. In the human-centered view, smart cities are about more than upgrading hard and soft infrastructure and enabling the flow of private capital. Instead, smart cities emerge on the basis of a comprehensive approach and are intended to improve the quality of life of city residents. This means stimulating competitiveness, of course, but also building-in environmental safeguards to strengthen urban resilience, investing in high-quality public transport to maximize mobility, promoting the efficient use of energy, strengthening service delivery, adopting an open data policy, doubling down on intelligent policing, and enhancing citizen engagement and even crowd-sourcing decisions related to city planning. The paradigmatic example of the bottom-up smart city is Amsterdam, though there are many others.

Whether technocratic or humanist, what virtually everyone agrees is that smart cities represent an unprecedented business opportunity. Estimates vary, but forecasters talk of more than $400 billion in potential investment in hard and soft smart city infrastructure by 2020. Analysts also estimate that the industry could be worth as much as $1.5-3 trillion by 2050. Predictably, some of the world’s largest corporations are taking note. IBM trademarked the term “smarter city” in 2008 and has since launched over 2,500 related projects. It has also set up a dozen smart-city laboratories to build and test new products. Meanwhile, ABB, Accenture, ARUP, CISCO, Deloite, Hitachi, McKinsey’s, Microsoft, Oracle, Samsung, Siemens, Toshiba and others are also getting in the game.

Smart city — for everyone?

Smart cities are very much a “developed world” concept. The hundred or so smart cities routinely featured in the global media are virtually all located in North America and Western Europe, with a sprinkling in East and Southeast Asia (see the map below). Smart cities are perceived by industry experts as a rapidly maturing market in the north. Not surprisingly, smart city champions are actively exploring new investment opportunities, especially in emerging markets and also lower income settings. They are keenly aware that almost 90 per cent of future population growth will be concentrated in Africa and Asia. 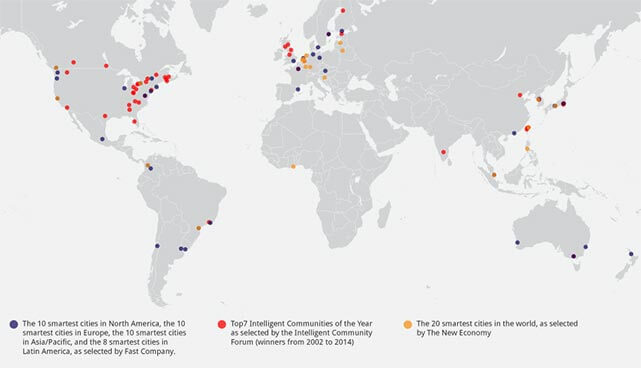 Smart cities will almost certainly generate positive impacts in the “developing world,” especially if a human-centered approach prevails. Yet smart city enthusiasts should be mindful of the highly differentiated realities of cities in the South. Many of these urban centers are expanding at break-neck speed and giving rise to sprawling slums and shantytowns. Roughly 3.5 billion people currently inhabit cities, and 1.3 billion of them are slum dwellers. Real social and economic divisions are reproduced virtually owing to tremendous gaps in Internet coverage. In order to bridge these gaps, some scholars talk hopefully of creating smart slums. While smart cities likely represent some aspect of our future, it is still the case that this future is unevenly distributed.

There is nevertheless palatable excitement among politicians, planners and investors in the promise and potential of smart cities in places such as Africa. Many municipal authorities there believe they can leapfrog old technologies and give rise to new silicon valleys. Already there are examples such as Tatu and Konza techno cities outside of Nairobi, Kigamboni City near Dar es Salaam, Cite le Fleuve in Kinshasa, and Hope City next to Accra, Eko Atlantic city in Lagos, and others on the periphery of Dakar and Gabarone. National authorities in countries such as Kenya and Rwanda have established strategies to make their cities smarter. Many of these new developments ultimately consist of isolated and self-contained nodes physically separated from the cities that spawned them.

Enthusiasm in the prospects of smart cities is probably most widespread in Asia. India, already the world’s second largest country by population, is projected to add another 700 million people by 2050. It will need at least 500 cities to absorb them. This partly explains the decision by Prime Minister Modi to build 100 smart cities with “optical fiber [sic] networks and next-generation infrastructure.” Meanwhile, China is also expected to field 100 of the biggest 400 cities within the next two decades. One of its latest smart city innovations is Beijing E-Town, described in advertisements as “a bustling technology innovation hub … a luxurious spot among the world’s elite in the most dynamic market today.” As it confronts growing problems with managing social and environmental stresses in its cities, public authorities are drawing on experiences in cities such as Masdar and Singapore to improve water management.

What these new smart cities in Africa and Asia have in common is a predominantly technocratic outlook. Metropolitan officials throughout both regions are aggressively courted by multinational technology construction and consulting firms. There is a hope that these newly connected smart cities can increase global competitiveness. To attract private capital, local governments are also hastily establishing special economic zones, low tax rates and generous subsidies. And while they wrestle with restrictive zoning requirements and appropriating land, they are also signs of large-scale evictions and evidence of local resistance. City authorities across the South would do well to forge tighter networks to share insights into what works, and what does not.

Some commentators fear that what are being created are not so much smart cities as business-friendly satellites. They are less a transformative project building in urban inclusiveness, mobility and cohesion than the reproduction of enclaves of exclusion and economic privilege. No one doubts that targeted investments in telecommunications infrastructure and new building complexes can attract foreign capital and much needed investment in the short-term. At the same time, the focus on making cities “smarter” raises fundamental questions about what is not being prioritized and funded. There is a risk that in seeking to create new growth poles, planners instead reinforce digital divides and spatial, social and economic segregation.

Put simply, there is a risk that smart cities of the south will privilege hardware and software over investing in people. The emphasis on new technologies may blind city authorities to the very real and persistent gaps in old, or traditional services and infrastructure. The seductive allure of big data systems, predictive analytics and mobile telephony is undeniable, especially when accompanied by international attention and resources. But private service providers may gloss over constraints in human capacity and local infrastructure in the rush to implement new smart city systems.

Rather than expanding the urban commons and empowering local residents, these technologies may instead alienate them and reinforce the distinction between the haves and the have nots. Instead of increasing local participation, they may inhibit it. If they are to avoid these pitfalls, a human-centered strategy ought to be central to our attempts to foster safer and livable urban living.