Mentions of climate change and other environmental issues saw a 17 per cent increase throughout the American media landscape in 2014, according to a new report by The Project for Improved Environmental Coverage (PIEC). While this puts a halt to three straight years of dwindling coverage, environmental news stories still only comprise one per cent of news headlines around the country.

The PIEC report found that environmental reporting continues to pale in comparison to coverage of entertainment stories by a 20 to 1 margin. “In fact, just one celebrity, Beyoncé, was more visible than five of the ten broad environmental topic areas,” the report states. Crime stories, meanwhile, eclipsed environmental ones by a 60 to 1 ratio.

“There are more resources than ever for reporting on or curating environmental stories, and in light of the environmental challenges we face, we and many others look forward to seeing more news organizations stepping into leadership roles and helping their industry to innovate in this area,” said the report’s author, Tyson Miller. 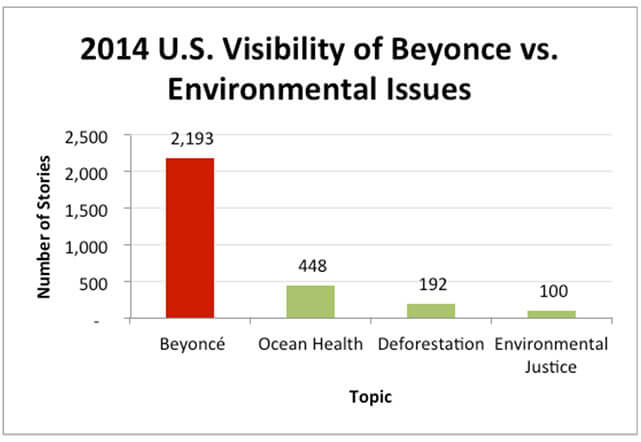 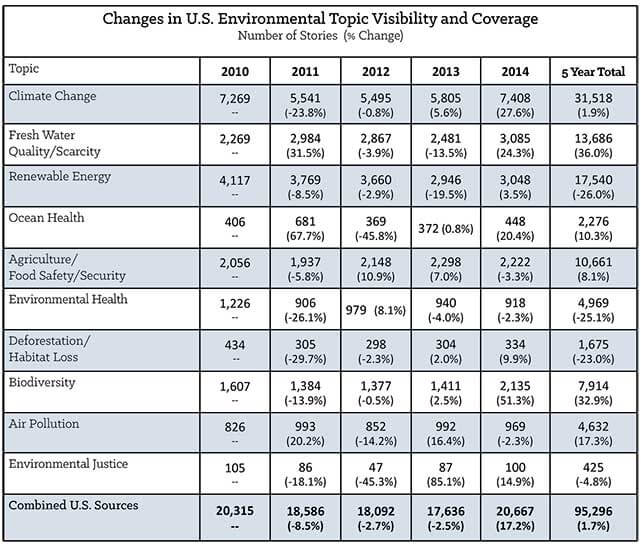 There was also a notable difference between local and national coverage, with local newspapers covering environmental issues at nearly three times the rate of their national counterparts. “There is a lot of room for improvement and local newspapers and independent news organizations can be looked to as models when it comes to prioritizing environmental coverage,” explained Miller.

A perceived lack of public interest is often cited as a reason for limited media coverage of environmental issues, an impression that the PIEC was eager to refute in their report. It cites a poll conducted by the Opinion Research Corporation, which found that “79 per cent of Americans want improved environmental coverage in the news – averaged across all demographics and geographic locations.”