According to a recent survey of 3,000 Canadians, more than two-thirds of workers say that it’s important for them to work for an employer that’s socially and environmentally responsible.

Unfortunately, only 55% of workers agree that their organizations are both socially and environmentally responsible in their business practices. There is clearly an opportunity here for companies to do better.

In recent years, the use of environmental, social and governance (ESG) indicators to measure a company’s performance has exploded in popularity – and with good reason. In addition to mounting public expectations for companies to be “good corporate citizens,” a 2021 meta-analysis conducted in partnership with NYU and Rockefeller Asset Management points to a growing body of evidence that good corporate management of ESG is tied to improved financial performance.

But beyond higher stock valuation and shareholder returns, the findings of the LifeWorks Research Group’s August 2021 Mental Health Index also showed that an organization’s behaviour can significantly impact workers’ mental health and productivity. We found that workers who report that their employer is environmentally and socially responsible also report, on average, having better mental health.

It turns out that those who feel a sense of belonging or acceptance have higher productivity than those who don’t. That warm and fuzzy sense of belonging is an important marker of psychological safety, one that can be activated when the company you work for aligns with your personal values, whether it’s support for action on climate change and plastic pollution or a strong commitment to diversity and inclusion. 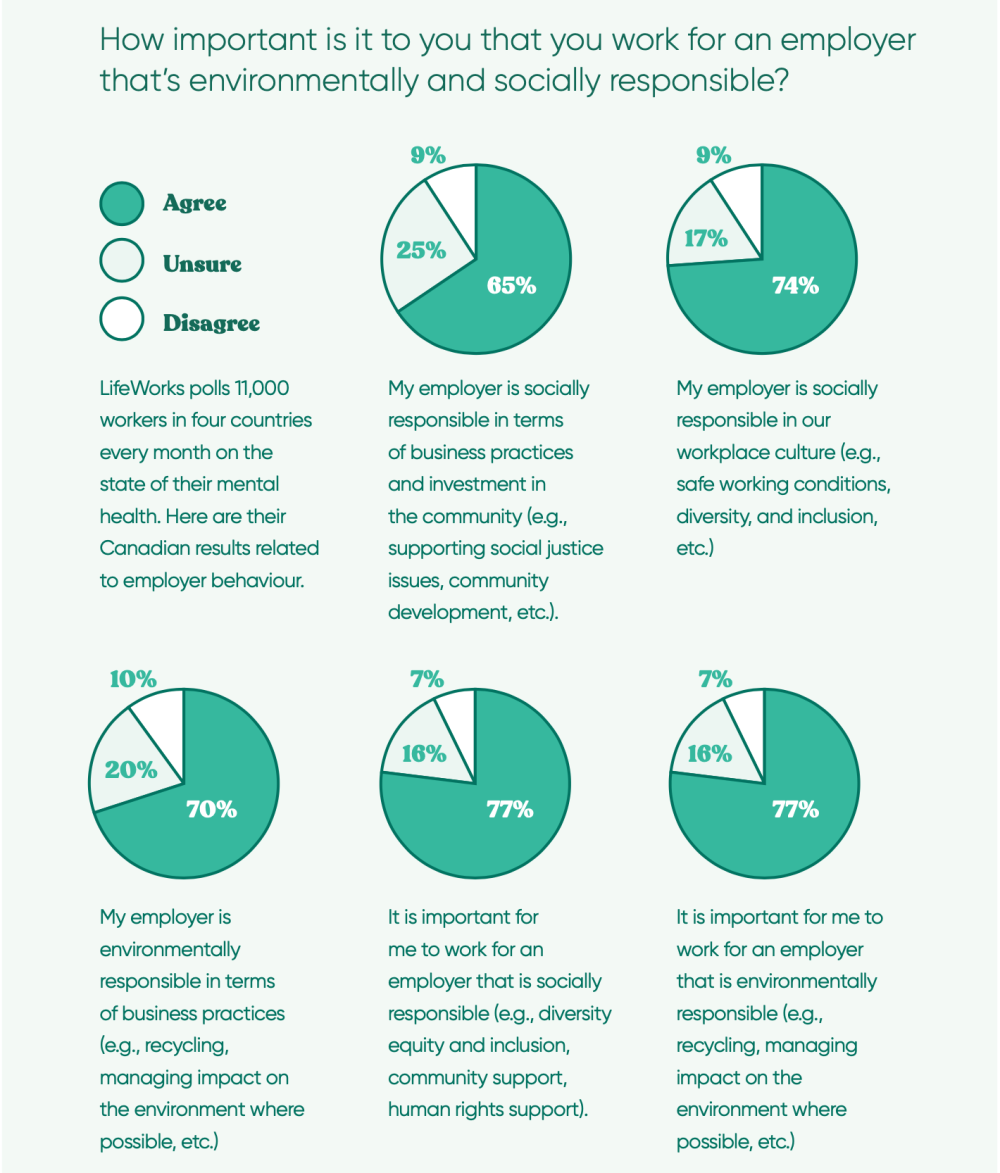 How did polling play out in different parts of the world? The results for all four countries surveyed are fairly similar. However, Australians rate their employers the best on social justice, while the Brits are last on this front. U.K. respondents are the least impressed by their employers’ ESG efforts, while U.S. workers are the least likely to say that ESG is important to them.

By and large, respondents in the bottom third of mental health scores in all four countries were significantly more likely to not feel a sense of belonging and acceptance at work. They were also significantly less likely to agree that their employer is socially and environmentally responsible. The workers who would recommend their organization as a “great place to work” (an indicator of engagement) just so happen to be on average 11% more productive than workers who would not.

The data is clear on a number of fronts. Improving a company’s performance on environmental and social metrics brings more value to shareholders, yes, but also, employees who feel good about their companies’ environmental and social behaviour reported better worker productivity, engagement and psychological safety. The triple bottom line: organizations would do well to deepen their commitments to environmentally and socially responsible business practices if they want to keep their workers happy.

Paula Allen is senior vice-president of research and total well-being at LifeWorks.