Growing up in Toronto and coming from a family that grew up on very small islands where you’re connected to the natural world, caring about the environment was something that was just a part of my life. But it was a hum, not a roar. My aha moment was in Spain, as the co-founder of an innovation hub that helped to launch a large-scale climate infrastructure project. When you sit in the room with experts and you hear them lay out, in frank language, how little time we have and what the consequences of inaction will be – it really opened my eyes. I understand that this is an existential crisis. I understand that we don’t have much time left. Once you really stare it in the face, you can’t look away.

When I talk to people in the north of Canada about the disproportionate impact of climate on their communities, I’m able to talk about the experience of my family from low-lying islands. They’re experiencing much more intense hurricane and typhoon seasons. I also understand that communities of colour and racialized communities are the ones that are impacted the worst and first by climate change. I understand the urgency of helping those communities.

I ran as MP for the Green Party in Toronto Centre in the 2019 by-election. When you’re running in a community that has some of the highest rates of unemployment; people living under the poverty line, including children; opioid addiction and poisonings, you really understand that if people are preoccupied with meeting their basic needs, they have very little bandwidth to be allies on the climate emergency. We’re not going to get the critical mass of sustained consistent public pressure that we need on our political leadership to get the change that we need if we don’t create more allies. And we’re not going to create more allies if those people are too distracted by meeting their basic needs.

If people are preoccupied with meeting their basic needs, they have very little bandwidth to be allies on the climate emergency.

This is why the Green Party also talks about things like a guaranteed liveable income, extension to the greatest degree possible of universal social programs – like post-secondary education, pharmacare, dental care, mental health care – exactly because we know that these are the building blocks that are going to create the climate warriors of the future.

As Canadians with an economy that has been centred on fossil fuels, many hard-hit communities don’t necessarily buy the promise of green jobs. It’s helpful for me to have a brother who comes from working on the oil rigs in the Prairies. When people know that it’s personal, they believe you when you tell them that this matters to you – I don’t want to see your community displaced, I want to make sure that you have jobs that can provide for you and your family.

As Canadians with an economy that has been centred on fossil fuels, many hard-hit communities don’t necessarily buy the promise of green jobs.

I come from a community that people understand has been historically marginalized, that has suffered from systemic discrimination, that has had a lot of socio-economic struggles. I know there’s no climate justice without social justice.

Ten years from now I see a society where we have finally completed our social safety net, so that when people are making the transition away from carbon-intensive industries, they can do it with confidence, knowing that they’ll be taken care of and their families and loved ones will be taken care of.

Canada has all the other elements that it needs: we are wealthy, we have the intellectual capital, we’re going to be making unprecedented investments into our economy. We just need that compelling vision about where we can get to and why it’s such a better place than where we are now.

This article has been adapted from a Q&A between Corporate Knights and Annamie Paul. We spoke with Paul about how diverse communities have frequently been sidelined in the climate conversation and how to flip the script to meaningfully engage all Canadians in the transition to a thriving, climate-neutral economy. This article is part of a series of stories from our Winter Issue cover package: What it will take for us to get the climate message before it’s too late. 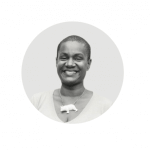 Annamie Paul is the leader of the Green Party of Canada. She is the first Black Canadian and first Jewish woman to be elected leader of a major federal party in Canada. Paul is a human rights lawyer who most recently worked as the Brussels director for Crisis Action.