This past January, John Bogle, the investing legend and “money manager for the people,” passed away after 89 fruitful years. Over the course of his life, he saved investors billions by offering low-cost no-nonsense index funds for the masses via Vanguard, the company he founded as an investor-owned co-operative that now manages over US$5 trillion.

I remember paying him a visit back in 2013 at Vanguard’s sprawling Malvern campus located outside Philadelphia. He greeted my colleague, Doug Morrow, and I with a left-handed handshake. His right arm was in a sling and looked a little the worse for wear. He had banged it up during a fall the day before, but that was not going to stop him from making an early morning interview with a Canadian magazine he’d never heard of. He said he didn’t like to break his appointments.

Over the course of an hour, Bogle held court, bonding with Doug, a fellow disciple of index investing, and sparring with me over the merits of sustainable investing (he thought it was doomed to underperformance like most other types of stock-picking).

While it is somewhat ironic that this fiercely independent man of moderation spawned an investment colossus based on automation, he maintained a scrappy skepticism of groupthink to his last days.

In that vein, I imagine that Bogle would smile at Eric Reguly’s account of the decision to initiate the most successful corporate climate change metamorphosis to date. The multi-billion call that led one of Europe’s most coal-intensive companies to go all-in on a renewable future was made on the conviction of two human beings, without bothering to get a second opinion from outside consultants. The only mistake they made was thinking the shift from black to green power would take 30 years. Instead, it took less than 10, paying off handsomely for the climate and shareholders. 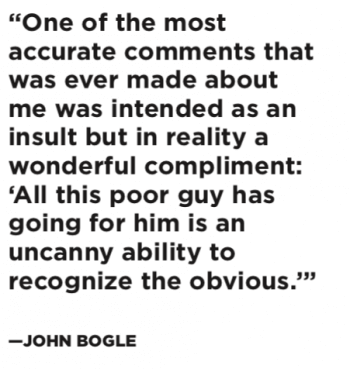 I also think he would have enjoyed Paul Mainwood’s clear-eyed look at the energy industry’s faulty crystal ball, the World Energy Outlook, which is actually a pretty useful tool for predicting the clean energy future, if you adjust it upwards by the same 10% per year it has historically undercalled the march of renewables. If this trend continues, we will be in much better shape than the backward-looking clean energy pessimists assure us is our fate.

Always a stickler for counting all the costs, I imagine Bogle would also appreciate Peter Gorrie’s review of electric cars versus their best-selling gas peers. Thanks to electricity being cheaper than gas and lower maintenance charges (no oil changes needed), electric cars are now cheaper than their gas counterparts in most places on a total cost of ownership basis (even before accounting for any sweetener subsidies).

While he may no longer be walking among us, the example of John Bogle lives on in the countless restive human spirits propelling the march of progress by stubbornly refusing to allow the tyranny of process to triumph over clear-eyed human judgment.