For a decade, Métis negotiator turned venture capitalist Jeff Cyr had a front-row seat to the government’s attempts at reconciliation with Indigenous Peoples.

Fuelled by a desire to address systemic inequity and armed with a master’s in political studies, Cyr took on lead roles in government agencies that gave him the opportunity to work from the inside to create space for Indigenous people at the proverbial table. But the roles also exposed him to the almost insurmountable barriers that Indigenous people face in every aspect of Canadian society.

Cyr didn’t grow up immersed in Canada’s troubled relationship with Indigenous Peoples. Born on the east coast of Vancouver Island, he spent his early childhood on a Canadian military base in Germany. His family returned to Canada when he was 10 and planted roots in the traditional Métis area of White Horse Plains, in southern Manitoba. Closer to his people, he began experiencing what it meant to be an Indigenous person in Canada: poorer health, lower levels of employment, high suicide rates, inadequate housing.

A high school exchange trip to India brought him face to face with another example of how a colonial past shows up in present-day policies, socioeconomics, and identity and cemented his determination to work toward removing systemic barriers. By the time he was taking leading negotiator positions in government, he was a firsthand witness to how the government’s attempts at inclusion were failing to break down “the very systems they put in place to excise Indigenous people,” a failure that prevented Indigenous people from becoming “full economic citizens.”

After more than a decade in government, Cyr felt compelled to find a different route to economic reconciliation. As the executive director of the National Association of Friendship Centres, he met Indigenous entrepreneurs working to build economic systems based on Indigenous knowledge and practices, guided by the wisdom of Elders and ancestors. Indigenous communities were innovating long before we started to hear corporations and governments speak to its value, Cyr points out. “We survived colonization, disease and economic exclusion because of our ability to innovate.” 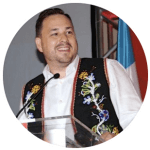 “We survived colonization, disease and economic exclusion because of our ability to innovate.”

But he noticed that Indigenous entrepreneurs remained unconnected to mainstream social innovation hubs, which offer access to capital, knowledge and networks. To increase the profile of Indigenous innovation within the larger social-innovation community, Cyr reached out to a number of organizations, including the McConnell Foundation, to hold the first Indigenous Innovation Summit. In 2018, he and two partners (including Paul Lacerte of B.C.’s Nadleh Whut’en First Nation) co-founded Raven Indigenous Capital Partners, Canada’s first Indigenous venture-capital intermediary.

Cyr explains that to transform historical power dynamics from dependency to self-determination, Raven leans in to a model that allows communities to set their own development priorities and then collectively brainstorm solutions rooted in Indigenous values and knowledge. A solutions-lab approach is used to determine needs and desired outcomes and connect with impact investors, foundations and governments.

Animikii, an Indigenous digital agency that was turned down for financing by big banks, was the first company to receive an investment through the Raven Indigenous Impact Fund in 2019. Animikii has sustained year-over-year growth, and the team has doubled in size. Other companies in Raven’s portfolio: Cheekbone Beauty, OneFeather (a digital voting and banking app), Virtual Gurus (a virtual assistant service) and Plato (a software-testing service).

Fundraising for the impact fund far surpassed the initial goal of $5 million, raising more than $25 million.

Cyr is proud of what Raven has accomplished to date, though he’s quick to point out that this moment is a result of many years of working with his Indigenous community and family. “Ultimately, we want a human-centred economy, one that centres on a balance between people and the planet.”

Shilpa Tiwari is the founder of Her Climb, a social enterprise with the mission to increase the number of racialized women in senior positions in corporations.