With all due respect to Superman fans, when it comes to visibility and popularity, not to mention style, the alien in embarrassing tights can’t hold a candle to Tony Stark and his rocket-powered armoured suit.

But don’t blame Hollywood’s The Avengers franchise. Iron Man has always had a weapon the Man of Steel can’t match. Superman spends most of his time hiding behind glasses as Clark Kent, toiling away for chump change at a daily newspaper. Even if he can type faster than a speeding bullet, story meetings and research eat away at his time as a superhero. As a billionaire industrialist, Tony Stark never worries about deadlines or pleasing a boss. In other words, even when not in character, Iron Man can tackle the planet’s troubles while Superman is stuck simply writing about the world’s woes.

Money is as powerful as good intentions. But fear of losing it typically scares business people off Hail Mary save-the-world projects, unless they are like billionaire Elon Musk, who inspired Robert Downey Jr.’s version of Stark in the Iron Man movies. As one of the co-founders of PayPal, which was sold to eBay for $1.6 billion in 2002, Musk obviously sees value in money. But he still swings for the fences as head of electric car maker Tesla Motors and Space Exploration Technologies (SpaceX), a private-sector version of NASA, because he is determined to solve sustainable energy production and make humankind a multi-planetary species. “We need more comic book-style billionaires,” tweeted a Musk fan in mid-2012 after Tesla announced it was ready to begin delivering its Model S luxury electric cars, and SpaceX made history as the first private company to send a spacecraft to the International Space Station. True enough.

As the International Energy Agency recently noted, the goal of limiting global warming to two degrees Celsius might already be a pipe dream. And yet, politicians around the world remain focused on financial issues. Even if the global economy somehow experiences relatively smooth sailing over the next four years, the International Monetary Fund estimates the debt-to-GDP ratio of every G7 economy will remain higher than before the financial crisis. As the Bridgespan Group recently noted, “we are now in a period in which advocating to increase spending in one area entails decreasing it in others or raising taxes to pay for more government. So advocacy to expand the role of government and government spending is becoming a zero-sum game.”

Meanwhile, the financial crisis forced a pullback in individual giving in 2011. “The outcome of falling donations is clear,” warns the most recent World Giving Index. “It means less aid during disasters, less access to good hygiene and decent housing, and a reduced capacity to care for the sick, the old and young. Ultimately, it means a worsening quality of life for millions.” 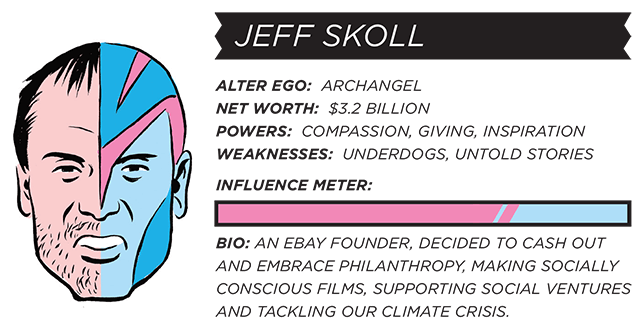 According to Olivia Fox Cabane, an executive coach and author of The Charisma Myth, impact investing is all the rage in Silicon Valley, where, “money per se doesn’t really mean that much anymore.” Musk isn’t even the only green billionaire to influence a comic book hero. Virgin Group founder Richard Branson would obviously make a good British Batman since he is often seen flying through the air, or across water, in high-tech crafts. Branson has also been known to jump off tall buildings. But as IGN Entertainment reports, it was his efforts to battle CO2 emissions that convinced producers of the soon-to-be-released animated series Beware the Batman to use him as a model to make Bruce Wayne more “of an altruistic guy.” 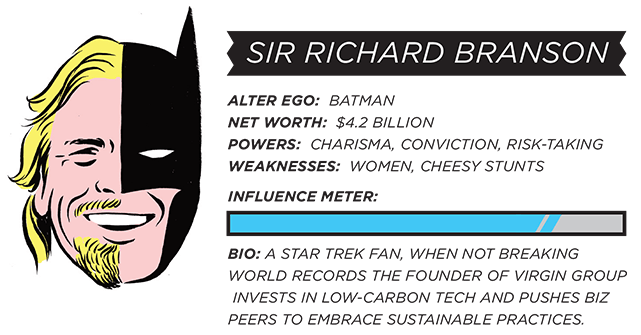 Matching other enlightened billionaires to comic book heroes isn’t hard. Warren Worthington III, the fictional winged billionaire known as Angel (and later Archangel), has nothing on former eBay president Jeff Skoll. After all, the dot-com legend flies high above other philanthropists for being one of the relative few individuals to have donated more than $1 billion in their lifetimes. And like Angel, who used his fortune to finance superhero ventures like the X-Men, Skoll supports peace on earth by funding social entrepreneurship and producing edifying movies such as An Inconvenient Truth.

What about New York Mayor Michael Bloomberg, a heavy-hitting philanthropist who advocates fighting carbon emissions via efficiency makeovers for urban buildings? Unlike comic book billionaire Oliver Queen, aka the Green Arrow, Bloomberg isn’t into market manipulation. But as founder of a financial services empire, he is obviously into trading stocks. And like Queen, who was mayor of the fictional Star City, Bloomberg is a progressive politician known for shooting verbal arrows. After witnessing the devastation caused by Hurricane Sandy, for example, he issued the following call to action: “Our climate is changing. And while the increase in extreme weather we have experienced in New York City and around the world may or may not be the result of it, the risk that it might be – given this week’s devastation – should compel all elected leaders to take immediate action.” 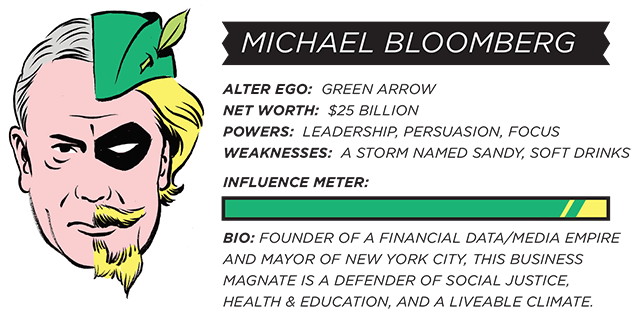 The problem, of course, is that there are more superheroes in comic book land than mega-billionaires who focus their time and philanthropy on environmental and social issues in the real world. As things stand, wealthy good guys (and gals) could easily increase their influence, insists Matthew Kiernan, author of Investing in a Sustainable World and chief executive of Inflection Point Capital Management, which aims to redirect investment flows to promote, rather than undermine, “the necessary global transition to a more environmentally and socially sustainable economy.” To increase their powers, Kiernan says the wealthy simply need to stop listening to old-school financial advisors who ignore (or remain woefully unaware of) the real positive returns that can be made via green investing and force charitable foundations to invest their capital as though they were run by the oil and gas industry’s David and Charles Koch. “I’ve long thought that the poor, downtrodden Rockefellers and their ilk need to be liberated from the yoke of capitalist oppression,” says Kiernan, who, not so playfully, thinks the world needs a Billionaires Liberation Organization to educate well-heeled do-gooders on how to make better use of their “dead money.”

But billionaire superheroes are needed for more than just their money. As Leon Black noted at a Forbes-sponsored gathering of 161 billionaires and
near-billionaires in September, “people are on The Forbes 400 because they are tenacious problem solvers.” Furthermore, as pointed out by Tzeporah Berman, eco-activist and author of This Crazy Time: Living Our Environmental Challenge, the real power of super-rich individuals is the ability to counter lobby groups that maintain the unsustainable status quo. “T. Boone Pickens,” she notes, “came out a couple of years ago saying, ‘Look, I think the future is in wind,’ and it had a huge impact, quite frankly, on wind investments.” When Bloomberg announced his $50-million contribution to the Sierra Club’s Beyond Coal campaign, she adds, his words were at least as beneficial as his donation. “Bloomberg stood on a podium and said, ‘We need to see the end of coal because coal kills.’ That had a huge influence.”

However, while the superheroes of capitalism have their moments, Berman argues they almost appear to take it for granted that standalone initiatives can somehow overcome global challenges, not to mention a better organized and more focused opposition. “The sad thing is that we haven’t seen major progressive corporations from cleantech or the IT industry or billionaire philanthropists step up and coordinate themselves into a progressive and persistent lobby to support significant pieces of legislation or international deals in the same way that has been done by the fossil fuel industry.”

Political activist Ralph Nader couldn’t agree more. He says there is no question that the world needs more billionaires like San Francisco hedge fund manager Tom Steyer, a cleantech investor. Steyer led a campaign that blocked Justin Hammer-like efforts by the Koch brothers to roll back California’s greenhouse-gas emissions law and bankrolled the push for legislation that will help finance energy-efficiency and clean-energy projects with funds gained by closing a corporate tax loophole. But what Nader thinks the world really needs is a Justice League-style group of billionaires dedicated to institutionalizing public interests and empowering the people.

Like comic hero Nick Fury, who organized the Avengers “to bring together a group of remarkable people, so when we needed them, they could fight
the battles that we never could,” Nader has tried to get billionaires to join forces to fight the good fight. In 2009, he published Only the Super-Rich Can Save Us, a roadmap for progressive change in America. In it, a fictional version of Warren Buffett is moved by the political paralysis that followed Hurricane Katrina to join forces with other super-rich individuals (and a few well-heeled celebrities) to take on the special interests and political dysfunction that stand in the way of making America a more just and sustainable nation.

The 735-page book didn’t have the impact Nader hoped. In fact, he doubts it was read by many members of his fictional dream team. Shortly after the book was published, however, Buffett and Bill Gates launched the Giving Pledge, an effort to get billionaires to commit to giving away at least 50 per cent of their wealth before or upon death. Gates and Buffett also host dinners so pledge members can exchange ideas. Nader gives credit where it is due. “At least now they are gathering,” he says. Unfortunately, he adds, what gets exchanged at group gatherings “are basically soft philanthropic preferences. As one billionaire stated, ‘We all know how to make a lot of money, but we don’t have a clue how to spend it.’ ”

By and large, Nader argues the Giving Pledge is still mostly “about charity, not shift-of-power advocacy for justice” because it has no criteria and lacks a mechanism for members to meet with movers and shakers at the grassroots level, where solutions are waiting to be backed. “We still need the super-rich to step up and empower the people,” he says, noting gatekeepers and ill-informed advisors are just part of the challenge. “The enlightened rich really don’t want to work together. Like many progressive groups, they are competitive. They don’t read each other’s books. They don’t collaborate. They don’t engage in mutual support. As a result, they weaken themselves.”

The good news, Nader says, is that it just takes one billionaire organizer to show what can be done. He thinks a senior citizen is required because young billionaires tend to lack perspective. And since he recalls Ted Turner failing to get a response when trying to create a coordinated billionaire group years ago, Nader thinks Canada might be a better bet for the first formation of a “Billionaire League of Justice.” Musk was born to a Canadian mother and Skoll is full-blown Canuck, so Iron Man and Archangel could be on the team.

As for a grey-haired leader, well, as luck would have it, Buffett wasn’t the billionaire credited with doing the most to shore up America’s leaking trust in capitalist society in the wake of Katrina. According to the New Orleans Times-Picayune, that honour goes to Austrian-Canadian Frank Stronach, whose generosity “shames us,” the paper said. After watching lame rescue efforts by U.S. authorities, the retired founder of the Magna International auto-parts empire sent a private-sector team to rescue hundreds of Lower 9th Ward residents while he rallied Canadian businesses to supply aid. Stronach then offered storm victims five years of rent-free accommodations in Canadaville, a new town built from scratch in central Louisiana that provided its original residents with counselling and job training and now serves as a disaster facility.

Stronach, who is currently trying to save Austria from the euro, isn’t known to work well with peers. But leading a group of superhero billionaires would probably appeal to the self-proclaimed philosopher king’s ego.

And who, after all, cares if ego is the driving motivation. To quote one line from The Dark Knight Rises, any “save-the-world project, vain or not, is worth investing in.”