A tree hugger and a tree cutter would seem to have about as much in common as a vegetarian and a butcher. So earlier this May, when the CEOs of Canada’s 4th largest forestry company and a major environmental organisation traded jobs for a day, it was like seeing the Dalai Lama in McDonalds.

Frank Dottori is CEO and President of Tembec Inc, Canada’s 4th largest forestry company with annual revenues of $4 billion and operations spanning to Chile, the US and France.

At 64, Frank still gets a kick out of creating a ruckus. He has strong instincts, which have not dulled after 30 years atop a corporation that now employs 11,000. He puts radical ideas on the table and waits for people to react. “And if no one yells at him, he’s disappointed,” says Forest Products Association President, Avrim Lazar. 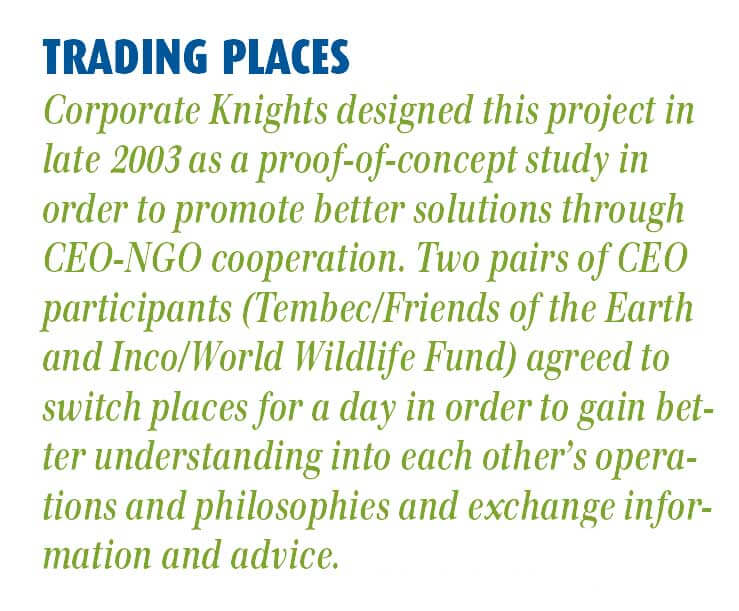 Although he is known within the forestry industry for having a soft spot for the environment, he is trusted to defend their interests. He is the point man on the softwood lumber dispute as Chair of the Free Trade Lumber Council. “They [the Americans] took our money. I want my money back,” he says.

Frank has done three things that give him green credentials. (1) He has committed Tembec to meeting the Forest Stewardship Council (FSC) certification for all 32 million acres of its operations. The FSC, endorsed by environmental and social groups, is the gold standard for socially responsible forestry. In 2003, 2.8 million hectares of public forests managed by the Company were given the stamp of approval by FSC-accredited certifiers.

Tembec is reaping the benefits of the FSC certification. Their office gets inquiries from customers every week on the subject, and Tembec has scored a $120 million contract with Home Depot because of it. Before FSC, Tembec had not sold a single toothpick to the wood retailing giant.

(2) Tembec also implements Impact Zero® for manufacturing facilities, which is based on three criteria: compliance; being at the top 20 per cent in the industry; and following absolute criteria when determining the minimum contamination that will harm the ecosystem. Under Impact Zero®, the company is required to eliminate the use of fossil fuels by the year 2010.

Tembec was created in 1973 in Temiscaming, Quebec, when a determined community and its people refused to give up their livelihood and future without a fight. The town’s economic lifeblood, a pulp mill owned by a large multinational corporation, was shut down in 1972. The mill’s former employees and Temiscaming residents gained national attention in their fight to save their jobs, and their efforts created a unique and unprecedented relationship among entrepreneurs, unionized employees, the community and levels of government. The mill was purchased and Tembec came into being.

Friends of the Earth Canada is an environmental non-governmental organization (NGO) with 64 ‘sister organizations’ around the world. They’ve been known to come down hard on industry; such as the ‘StopEsso’ campaign in 2002. In 2003, they partnered with Sierra Legal Defence Fund to beat Imperial Oil at the Supreme Court, helping to reinforce the ‘polluter pays’ principle.

Just before Christmas, Friends of the Earth succeeded in prodding the Commission for Environmental Cooperation (CEC), a NAFTA arm, to investigate lax enforcement of federal anti-pollution laws against Canada’s pulp and paper industry. Tembec’s St. Raymond, Quebec mill was included on the list of ten mills of greatest concern.

May 3, 2004 at Nickel’s, a pub in the Ottawa market. Frank enters at 8 am sharp, carrying his travel accoutrements: a black leather shoulder bag and a briefcase. Brown jacket, open-necked shirt, no tie. Waiting at the table are Beatrice Olivastri, his co-protagonist in this play, whose job he has for today, Kevin Gallagher, board member and Karen Cartier, staffer from Friends of The Earth Canada. Pleasantries ensue. Frank nibbles on some brown toast.

When I told some of my industry friends I was going to do this, they almost had a heart attack.

Bea pulls out an agenda for today’s activities and goes over it. Frank listens and gathers information. He looks like he’s itching to get something off his chest. Bea gets the bill. The party moves to the Friends of the Earth boardroom up the street. The topic is Green Electricity and FOE’s forward plans. Lest anyone think that Frank takes his role lightly, he fires the first salvo, calling for a carbon tax.

Your approach to green power is idealistic and impractical. The idea of people spending eight cents for green power when they can get it for four cents is idealistic. For significant change in green energy, it’s money that counts at the end of the day. Rather than looking to get massive tax subsidies to support the one per cent of the world that is idealistic, why don’t we look at what will really make green power a reality: put a carbon tax in place. They do it in Europe. The carbon tax goes into a fund that is then funnelled to entrepreneurs to fund projects that produce more green energy. That’s the kind of thing that will have a big impact. Call it a green tax. There will always be part of the business community that will object to ideas like this. The Canadian Association of Petroleum Producers won’t like it unless you have consumers paying for it. They have economic might, so they will have some influence. But if you take a sophisticated strategy and get industry allies on board, the Canadian public will support something like this. One industry with a weak argument against it won’t be able to stop it. At the end of the day, what does Friends of the Earth stand for? Are we serious about green power, or not?

Bea mentions that one of the first pieces of work FOE did 20 years ago was a pamphlet called ‘Life After Oil’ which laid out a renewable energy strategy for each province in terms of the technology available at that time. ”

One of our fundamental responsibilities is to move Canada towards a renewable energy strategy. We need to bring the notion of green electricity to the masses. Make it a reality. I’ve been called an idealistic SOB. At the end of the day, we are a society that likes quality of life. People will talk but they won’t pay a premium because people are hypocrites. But if we package this to get buy-in from the public, I think we can make it fly. Otherwise we’ll be nibbling at peripherals.

They agree to make Frank honorary chairman for the green tax.

FRANK IS INVITED TO A SUMMIT

For lunch, they went to Bea’s favourite pub, Daddy Boland’s. Bea orders a brewsky. Says you can’t run an environmental group and drink pop. Celtic music backdrop. Avrim Lazar, president of Forest Products Association of Canada, sits at Bea’s left. Frank, Karen and Kevin are across the table. Everything is made of wood: the table, the chairs, the paneling.

Bea: We want to reposition the forestry sector in the new economy as a restorative industry.

Frank: I think there is an opportunity with air pollution and green power. The forest products industry has an opportunity to address growing energy needs through biomass.

Avrim: If you look globally, where forests are in trouble, it’s in places where the economic incentives are to cut them down rather than to sustain them. The beginning point is to accept that if communities depend on them for their well being, that’s the best guarantee [for sustaining the forests]. We have 350 towns that would have to shut down tomorrow if their mills shut down.

Frank: We should be an exporter of power. In BC, Tembec has the first mill to put in place a biomass co-generation system, and it is an exporter into the grid. These units take us from being power consumers to being big building blocks for green power.

Avrim: If you think of the sequence of industrialization, there are lots of people who think the next age will be the biological age. You can’t escape the fact that we are just bags of protoplasm, bags of bone and blood, and that solutions and the well-being of humanity is going to depend on that. Humanity’s future is in biology, not information. Information is the means. Biology is the end. We are the end.

Avrim wants Bea and Frank to sit down with him and redefine the way the forestry industry works in Canada and the world, to make it restorative.

Avrim: We are trying to develop a sustainability standard for our members.We have the Forest Certification Standard. If you don’t meet it we kick you out of the association. But it doesn’t deal with the social or economic sides of sustainability. We could look at the sort of things that come out of the restorative agenda, and then build them into the sustainability requirements, which would then become a condition for membership in FPAC, which would either lead to better sustainability or my having no members.

Avrim: The Food and Agriculture Organization of the UN (FAO) has asked if I would help them develop a set of guidelines for the global forestry industry. For us it’s essential. Many of our competitors don’t have the same sort of requirements for social and environmental responsibility, so we are trying to get global standards up. The FAO is willing to develop them. We could use the restorative agenda as a feed into that. In May 2005, we are hosting in Vancouver all the global forest industries and the FAO.We are going to have a forum on the future of the forest industry. If you want to sit down and work out a 24- month agenda for developing the concept, putting some meat on it, and launching it to the point where it’s got a bit of traction, would be very happy to do that.

Silence. Unusual for this talkative trio. Lasts for over a minute.

Frank: The agenda is to improve quality of life. What is that? A good job. A healthy environment. A social environment that is safe. You can live in a great environment–peaceful, no noise, waterfalls, beavers and otters, but if you don’t have a job it’s a bitch to eat. On the other hand, you can have a great job, and live in a polluted environment and that isn’t a balance either.

Avrim: You’re coming to the forestry industry, Frank, with a fairly idealistic concept of a restorative agenda, in which we would use the benefits of nature to enhance human wellbeing, integrated into an industrial strategy. I think it’s the sort of direction that the industry is moving, sometimes in fits and starts.

Frank: My only concern is always with specifics. What am I trying to do here? Why am I going through this?

Avrim: You environmentalists are so bottom line! We industry types like to look at the bottom line but we realize there are many threads that have to be woven into a whole cloth. Let’s get a few people together and do a scoping exercise. What do we mean by restoration? What do we mean by integrative? What do we mean by human well-being?What milestones are we looking at? What would we consider to be success? We should go away from the offices and have one evening and one day and brainstorm.

Frank agrees to the date with Bea and Avrim and they decide to invite a few others along for the retreat.