Asia Pulp and Paper (APP) was designated a Zero by Corporate Knights back in 2012, after a Green­peace investigation uncovered damning evidence of illegal clear-cutting in portions of the Indone­sian rainforest controlled by the company. The report and a sub­sequent Greenpeace pressure campaign led to over 130 global companies dropping APP as a paper supplier. Even prior to the Greenpeace report, APP had gained a reputation in the indus­try as an environmental pariah. British environmentalist George Monbiot once described APP as “one of the most destructive companies on the planet.” 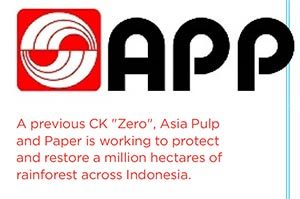 Nearly three years after this article first appeared in our maga­zine, APP is well on its way to completing one of the fastest and most dramatic environmen­tal turnarounds in recent decades. It began with the rollout of a Forest Con­servation Policy (FCP) in February 2013, which placed an immediate moratorium on all natural forest clearance while independent assessments were conducted to determine which areas should receive special protection.

Greenpeace decided to suspend active campaigning against APP after the release of the FCP, while continuing to carefully monitor the adoption of conservation measures. “By working closely with multiple stakeholders, such as Greenpeace and The Forest Trust (TFT), we were able to understand how we could achieve both our business and sustainability goals – with the ultimate objective of achieving a zero deforestation business model,” says Ian Lifshitz, APP’s director of sustainability and stakeholder relations for North America.

The next step was a plan, also developed in collaboration with environmental groups, to protect and restore one million hect­ares of rainforest across Indonesia. The Rainforest Alliance is currently conducting an independent evaluation of APP’s over­all progress.

“With key people in senior management genuinely commit­ted to making it work, APP’s implementation of the FCP has been transparent and very largely successful to date,” says Shane Moffatt, a forest campaigner for Greenpeace. “To continue engaging the private sector in this landmark initiative, custom­ers should in our view apply contractual conditions requiring continued progress and demonstrate to APP that these commit­ments are worth it.”

For Greenpeace, Asia Pulp and Paper’s turnaround is proof that targeted campaigns can get results.

Kia Motors and Hyundai Motor Company agreed to a historic $350-million settlement in November with the U.S. Environmental Protection Agency (EPA) and the U.S. Department of Justice over violations of the Clean Air Act. The two automakers, both affiliates of South Korean conglomerate Hyundai Motor Group, agreed to collectively pay a $100 million fine, spend $50 million on equipment upgrades and forfeit $200 million worth of emissions credits for misrepresenting their gas mileage figures on 1.2 million cars sold throughout the United States. 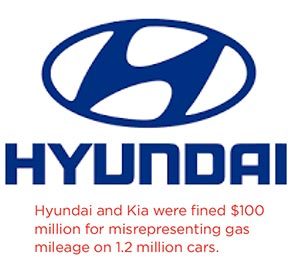 It is the largest corporate penalty ever levied for violations of the Clean Air Act. “Businesses that play by the rules shouldn’t have to compete with those breaking the law,” said EPA Admin­istrator Gina McCarthy in a statement. “This settlement upholds the integrity of the nation’s fuel economy and greenhouse gas programs and supports all Americans who want to save fuel costs and reduce their environmental impact.” A class-action lawsuit brought by customers was settled last year for close to $400 million, bringing the combined costs for Hyundai and Kia to over $750 million.

The EPA investigation began after routine testing in 2012 raised several red flags. While a number of other automakers have been cautioned by the EPA for small mileage discrepan­cies in recent years, the EPA eventually uncovered widespread miscalculations across a quarter of 2011 to 2013 Hyundai brand vehicles sold in America.

Kia, meanwhile, was found to have two models with inaccurate mileage standards. Both compa­nies actively featured the increased fuel economy ratings in advertising campaigns run in 2011 and 2012, which included Hyundai repeatedly boast­ing about its most popular models achieving 40 miles per gallon in highway driving. The automakers have maintained that the discrepancies were the result of vague federal guidelines, and that they have been nothing but transparent throughout the entire process.

One of the main problems, according to the EPA, was that Kia and Hyundai were allegedly using the best test results as their mileage benchmark, when it is standard industry practice to use an average of all tests combined. As part of the settlement, Kia and Hyundai have agreed to reorganize their emissions cer­tification group and revise test protocols in time for their 2017 models. In the meantime, both companies are required to audit their mileage standards to ensure reliability.

Given the banks’ deep reach across the Canadian economy, new net-zero commitment could drive a