To tell the history of Indigenous feminism, we have to acknowledge that such a history can’t be easily distilled down to a few pages or simply based on the origins we think we know and understand about Indigenous women and their communities. Indeed, in narrating this history, we have to set aside the notion that feminism for Indigenous women begins as an outgrowth of white liberal feminist movements or as necessarily parasitic on feminist movements in the global south or by women of colour. Indigenous feminisms are generated within social and historical contexts that are distinctly Indigenous.

Here are two key moments in the history of Indigenous women’s organizing, one before and one after the destruction of the world as they knew it. Separated by 100 years, both moments attest to the resilience of Indigenous women’s political and cultural efforts to address the impacts of patriarchal colonialism in order to seek justice for their people, culture, and the earth, their mother.

With these few words, Nancy Ward, Beloved Woman of the Cherokee, closed her speech to U.S. treaty commissioners in an effort to bring peace and instill in her audience of white men a sense of respect for both the kinship relationship such a treaty would represent and her authority to negotiate the treaty. Moreover, this particular statement noted the troubling absence of white women in the political process that would broker peace between the two nations. Ward’s words were not merely a sisterly comment on the political participation of white women, but on the capacity of white men alone to negotiate and institutionalize relationships of mutual respect and coexistence.

The U.S. treaty commissioner’s response proved such a point, “Our women shall hear your words, and we know how they will feel and think of them.” He added, after all, “We are all descendants of the same woman,” a telling biblical reference to a patriarchal world vastly different than one shared by the matrilineal society of the Cherokee nation.

For decades following this initial interaction, Cherokee women resisted the persistent threats of removal after the Treaty of 1781 as well as the loss of political authority over lands that the Cherokee governance structure extended to women. In letters to the U.S. government and their own national council, these women would petition for their rightful authority over decisions about their land and territory, a movement captured by many Cherokee writers and historians.

For decades to follow, the Cherokee women’s council would convince the male leadership of the women’s ongoing authority in such matters and encourage the men to fight removal for the sake of the nation’s future. Of course, this concerted effort would be thwarted by President Andrew Jackson’s rejection of Cherokee sovereignty and the forced removal known as the Trail of Tears.

Yet, the resistance and organized efforts of the Cherokee women are reflected in ongoing struggles of contemporary Indigenous women land defenders and feminists. This story reminds us that in our own history of Indigenous women’s political resistance are the strategies for asserting our power today as well as what constitutes the foundations of that power: the land – and our relationship to it – as well as those forms of governance that respected such a relationship.

It is only one story among many.

For spite I feel like putting my hand forward and simply wiping the Indian men‘s committee into nowhere!! No – I should not really do such a thing. Only I do not understand why your organization does not include Indian women. Am I not an Indian woman as capable to think in serious matters and as thoroughly interested in the race as any one or two of you men put together?

In the early decades of the 20th century, Zitkala-Ša embarked on a career of Indigenous organizing, activism, writing and leadership that few have ever accomplished. Famous from an early age as a writer, poet and storyteller, Zitkala-Ša would leave behind her literary efforts to commit to full-time activism in the last decades of her life. Yet as evidenced in the youthful admonition of her one-time lover and fellow organizer Carlos Montezuma, Zitkala-Ša could not abide organizing by “progressive” Indigenous men at the expense of women’s voices. 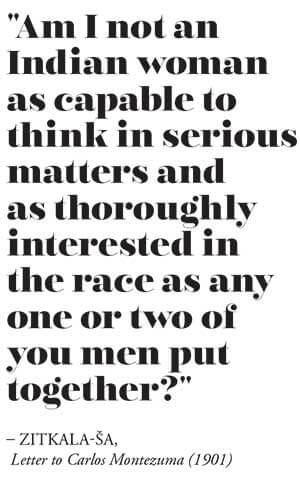 Indeed, once disillusioned with such organizations, she turned to the General Federation of Women’s Clubs, convincing the organization to begin an Indian Welfare Committee to which she had herself appointed. Working as the face of the committee, she would set out on a journey – one of many – to research and write about the injustices facing Indigenous people.

One of these trips was to the Oklahoma oil fields in the 1920s. Sent there to study the conditions of Indigenous life caught in the storm of rapid extractive development, fast money and white greed, her research is the surviving record of not only injustice, but of a remarkable Indigenous woman who laboured over the work of reviewing 14,000 probate cases, conducting interviews of American Indian women who suffered violence and analyzing various court proceedings. This research resulted in the 1924 pamphlet, dramatically titled, Oklahoma’s Poor Rich Indians: An Orgy of Graft and Exploitation of the Five Civilized Tribes, Legalized Robbery, in which her narratives of violence against women reveal her anger and resolve.

Zitkala-Ša’s storied example of ethical kinship and responsibility to the land, women, children and men in her research and writing is one that must be heard by contemporary Indigenous men and women acting in their own contexts to write the next chapters of Indigenous feminism.

They remind us that Indigenous feminist history is defined not by academics such as me, but by the women whose work is accountable to their communities and, most importantly, the land of their mothers.