American cities still have a long way to go before they’re considered safe for people of all ages and abilities to bike. But many of them have made a lot of progress recently, especially the ones building protected bike lanes.

That’s the takeaway of a recent data project featured in the American Journal of Public Health that examines crash and injury rates for cyclists in 10 American cities. 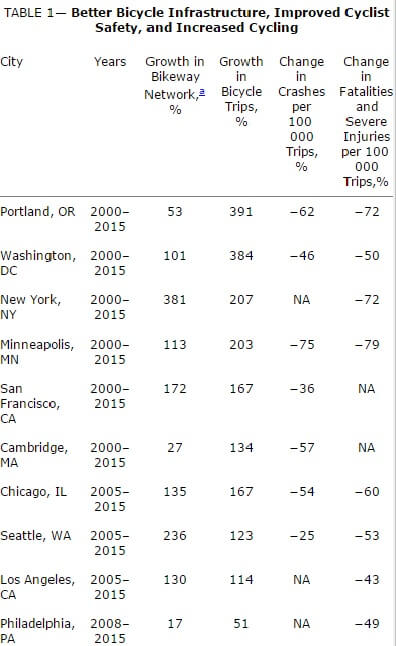 Researchers examined 10 cities that have been “especially successful at improving cycling safety and increasing cycling levels by greatly expanding their cycling infrastructure.” The above table shows recent changes in bike network growth, cycling rates, and crash and injury rates for cyclists in those cities. Minneapolis, Portland and New York City have seen the largest drop in injury and fatality rates among this group.

The change in bike trips in each city was determined using Census data about the number of bike commuters in a city. The authors assumed each bike commute accounted two trips per day and that these trips represented one-fifth of total bike trips. The assumption was based on the most recent National Household Travel Survey, which found that about one in five bike trips is work related.

Citing previous work by Kay Teschke, Anne Lusk, and other researchers, authors John Pucher and Ralph Buehler say it’s not just the volume of bike infrastructure that matters, it’s the quality as well.

“It is crucial to provide physical separation from fast-moving, high-volume motor vehicle traffic and better intersection design to avoid conflicts between cyclists and motor vehicles,” they write.

While American cities have made improvements to cycling safety, they have a long way to go to be truly safe. Currently, the fatality rate for cyclists in the United States is almost five times as high as counties like Germany, Denmark and the Netherlands, which have more robust bike infrastructure. U.S. cities need to continue to expand bike infrastructure, especially protected bike lanes, say Pucher and Buehler recommend, if they’re going to keep on reducing cycling deaths.

This article was originally published on StreetsBlogUSA