For the first time a nuclear company – in this case, a nuclear fusion startup – has made it onto the sixth-annual Global Cleantech 100 list, which shines a light on those companies “most likely to have a big commercial impact in a five to 10 year timeframe.”

Nearly 6,000 clean technology companies from 60 countries were nominated for consideration, so the fact that Vancouver, B.C.-based General Fusion made it onto such an elite list begs the question: After more than half a century of trying, is commercial-scale nuclear fusion finally just around the corner?

The list was created with the input of an 84-person expert panel, so it’s not like a couple of people in a room arbitrarily picked their favorites over a beer. General Fusion was compared against thousands of companies with far less risky and ambitious goals, but it still rose above. Not to suggest it wasn’t a controversial pick among the judges. The company also made it onto the Marmite list – like the English breakfast spread, you either love it or hate it.

“Many panelists admire the company for ‘attempting something so audacious,’” the report’s authors pointed out. “Will it be commercial in the next 10 years? Is it too dependent on fickle government regulations? Conclusion: The company has the potential to revolutionize power generation if it can succeed with its technical milestones. A binary bet, it seems.”

I’ve been a close observer of General Fusion for a decade now, having written a chapter about the company in my book Mad Like Tesla. Corporate Knights also mentioned General Fusion last year in a series on the future of nuclear. So like Amazon.com founder Jeff Bezos, who is an investor in General Fusion, I may be biased. I hate Marmite, but I like General Fusion. 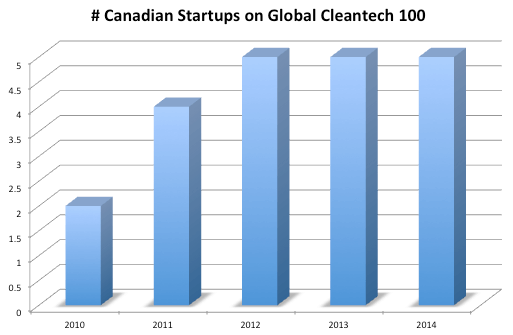 Canadian companies continued to do relatively well on the 2014 Cleantech 100 list. Like the lists from 2013 and 2012, five companies made it onto this year’s list – three of them returning, two of them new.

In addition to General Fusion, water treatment company Axine Water Technologies, also from Vancouver, is a newcomer to the list. In fact, three of the five Canadian companies on the list are based in and around Vancouver. Axine has developed a chemical-free system that can treat high concentrations of toxic compounds that are otherwise difficult to chemically break down. Its system can be scaled up, and is currently being aimed at the treatment of oil and gas process water.

The other Vancouver-based company on the list is Ostara Nutrient Recovery Technologies, which has been a permanent fixture on the list for the past five years. Ostara recovers phosphorus and nitrogen from municipal and industrial water streams and transforms them into eco-friendly fertilizer products that can boost food production.

Also in the 2014 group is Montreal-based Enerkem, which uses a thermal-chemical process to turn non-recyclable municipal solid waste into biofuels and other chemicals. The company launched its first full-scale commercial facility in Edmonton in June

The final Canadian company is Calgary-based FilterBoxx, which, like Axine, has technology for treating process water from oil operations – specifically from enhanced oil recovery and unconventional drilling projects.

Three scientists – two Japanese, one American – won the Nobel Prize in physics on Tuesday for inventing blue light-emitting diodes (LEDs), so it’s fitting to point out that three companies on the 2014 Cleantech 100 list are LED innovators: Glo from Lund, Sweden, a developer of nanowire-based LEDs; Digital Lumens of Boston, a designer of intelligent LED lighting systems for industry; and Dutch company LUXeXcel Group, which uses 3D printing technology to make LED optics.

Why is the development of blue LEDs important? We know LEDs are super-efficient and long-lasting forms of lighting, but until the development of blue LEDs all we had was green and red – that is, an important part of the light spectrum was missing. By adding blue to the mix, white LED lights could finally be created, in effect opening up the possibility for LED technology to go mainstream as a high-efficiency lighting standard.

Overall, 17 countries are represented on this year’s Cleantech 100 list, though the United States dominates with 62 companies. The most popular and fastest-growing sector appears to be energy efficiency, which is represented by 24 companies. Solar made a bit of a comeback with nine companies, up from six companies in 2013.

Cleantech Group, the organization that produces the Cleantech 100, identified the following six “mega themes” from this year’s batch:

Cleantech Group also found that large corporations are more active than ever as partners with cleantech startups, whether through investment, licensing, or acquisition. General Electric was identified as most active, followed by Siemens, Google, BP and utility E.ON.