Kermit the Frog famously said it’s not easy being green. Today, it might be easier being green than being a CEO in the oil business.

Fifty-two oil companies have already filed for bankruptcy this year, and over one-third of the world’s biggest oil and gas companies could end up bankrupt in 2016 under stress from crushing debt loads (over US$150 billion) and lacklustre cash flows depressed by low oil prices, according to a recent study by Deloitte.

While growth in fossil fuels stagnates, growth in clean energy is taking off. Since 2000, the International Energy Agency has had to revise its long-term solar forecast upwards 14 times and its wind forecast five times. Wind’s market share of power generation has doubled four times in the past 15 years, and solar has doubled seven times. It is getting a lot cheaper to make power from wind and solar thanks to technological breakthroughs, better financing arrangements and economies of scale. The world is currently adding twice as much clean power capacity than coal, oil and gas combined, according to Bloomberg New Energy Finance (BNEF).

The bigger worry for oil businesses is the unexpected speed and scale of the rise of the electric car. The main reason is cheaper batteries, which make up one-third of the cost of electric cars. Battery prices fell 35 per cent last year and electric vehicle sales rose by 60 per cent. By 2022, BNEF estimates electric vehicles will cost the same as their internal combustion counterparts, and if growth continues at the current 60 per cent year-over-year pace, oil displacement by electric vehicles will reach two million barrels per day by 2023. Two million barrels per day is the size of the current oil glut, which was enough to drive global oil prices into the gutter. Factoring in autonomous cars and ride-sharing services, electric vehicles could reach 50 per cent of new vehicles sales by 2040, according to BNEF, 50 times higher than what OPEC is projecting.

None of this portends an imminent end to our fossil fuel age, but it does spell an end to fossil fuels as a juicy growth market. This sentiment has been ratified, sanctified and tallied by the political, moral and financial bellwethers of our time from Paris (195 countries committing to phase out fossil fuels this century) to the Vatican (the Pope’s moral invocations to drastically reduce use of fossil fuels), to the Bank of England (governor Mark Carney’s prudent warnings not to get stuck holding a bag of stranded fossil fuel assets).

The upshot for oil businesses that care about growth: focus growth strategies on renewables (and possibly gas).

Some big oil companies are betting big that the stroll away from coal will parlay into a dash for gas. That played into Exxon’s $41 billion acquisition of XTO Energy in 2009, which vaulted it to the top of the natural gas producers table in the U.S., and it also explains Shell’s recently closed $52 billion acquisition of BG Group. Whether natural gas is a bridge to a low-carbon future or a bridge to nowhere on climate progress hinges on containing the downstream methane leaks.

Other oil companies including European majors Eni, Statoil and, most prominently, Total are diversifying into renewables, albeit less emphatically. “Electricity will be the energy of the 21st century,” according to Total CEO Patrick Pouyanné, who has placed renewables at the top of Total’s growth goals.

If you follow the money, however, the company making the biggest move to diversify into renewables is not based in Europe, but in Calgary. Enbridge, just one-third the size of Total by market cap, has a renewable investment program twice as large. Over the past decade, while under heavy fire from environmentalists opposed to its pipeline expansion plans, Enbridge invested nearly $5 billion in renewable energy and now plans to ramp that up to $10 billion by 2019.

In just the past half year, Enbridge has invested $1.3 billion in wind projects in England, France and West Virginia. On his last quarterly call with analysts, Enbridge CEO Al Monaco talked more about offshore wind farm opportunities than oil pipelines by a score of 796 words to 528. The stalled (perhaps indefinitely) Northern Gateway pipeline didn’t merit a mention or even a question from the analysts.

To be clear, Enbridge is not abandoning its traditional bedrock: over 70 per cent of the company’s profits still come from transporting oil through its vast network of pipelines, though Monaco recently indicated this could shrink to 50 per cent as early as 2020 as its other business lines grow.

Why is Enbridge making the biggest bet on green energy among its oil business peers?

After a decade of pitched battle with environmentalists and local communities over the proposed Northern Gateway pipeline, Enbridge has a visceral understanding of how hard it is to build a major new oil pipeline in the 21st century. The other reason is Enbridge’s utility-like shareholder value proposition, which is premised on building and operating major capital projects that crank out stable cash flows with minimal commodity price risk based on fixed-term contracts with creditworthy customers.

Taking a dispassionate view of the fundamentals, it’s a lot easier to build a wind farm today than a new oil pipeline. You’re able to earn similar returns with customers that are more creditworthy. So Enbridge is taking the plunge, gearing up to be a player in the $200 billion European offshore wind market build-out over the next 14 years.

This December, on the sidelines of the Paris climate summit just hours before countries reached historic agreement to shift from fossil fuels to clean energy, Toby Heaps caught up by phone with Enbridge CEO Al Monaco.

CK: What was the genesis of the strategy for Enbridge to meaningfully diversify into renewables?

MONACO: When we started with our first wind farm a number of years ago, it was more of a side business. We were investing small amounts into new energy technologies as a way to promote their growth. But it quickly developed into something a little bit different because we had some good success and the world changed.

CK: How did the world change? 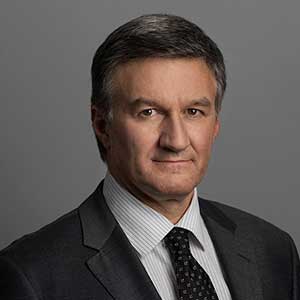 MONACO: We all now agree that we are going to change to a low-carbon economy. The economics of renewables also changed a lot. It’s not really unusual and we should have expected it, but we have had a huge decline in the levelized cost of renewable energy in the last five years. In fact, if you look at the costs on a per-megawatt basis it has come down over 60 per cent for wind and 80 per cent for solar. The biggest reason for this is scale. We started our first wind farm with 0.6 megawatts offshore – now we are talking about 6 megawatts. The yields on our offshore wind energy are much improved these days because of better technology and our understanding of wake effects [changes in wind speed caused by the impact of the turbines on each other]. The supply chain has grown stronger and there are a lot more wind developers, which have driven costs down. Renewable energy generation targets set by regulators have also helped.

CK: As the economy shifts from liquid fuels to clean power, how bullish are you on power transmission lines?

MONACO: There are literally hundreds of billions of dollars required just to replace existing transmission infrastructure, never mind growing it, so a huge opportunity set there for us. In the scope of our strategy if you look at gas, renewables and transmission, they all fit together. Gas fits with renewables quite well to allow for management of load, and transmission is going to be a big part of renewables, given where the best resources are at and where they need to get to.

CK: You have set aside billions of dollars to ramp up your renewables portfolio over the next few years. How do you decide where to invest?

MONACO: Before we execute a project, it has to go through the tumbler and meet the investment criteria. We want to know if it will provide a good return, if it has a good underpinning commercially, for example a power purchase agreement. Can we manage the capital cost risk, does it have good transmission capacity and is the resource in the area strong? Are we able to gain public support? Those are the things we look at before making the investment decision.

CK: How have your investors responded to this pivot toward renewables?

MONACO: They get it. They look at it from a fundamentals point of view like we do. They ask us whether or not the projects achieve the same kind of returns as with the rest of the business.

CK: Do you see a day in your lifetime where new energy becomes the core part of Enbridge’s business?

MONACO: It’s hard for me honestly to envision how renewables become the major driver of our business within the next decade or two.

CK: I would hope you are going to be around more than two decades.

MONACO: Ha ha. Well, maybe by then. It all depends on the fundamentals.