Have you caught any Canadian news lately? If so, you’d know the Montreal-based engineering firm, SNC-Lavalin, is at the centre of a major controversy in Canadian politics right now. We won’t rehash all the gory political details, but suffice it to say, the scandal hasn’t helped SNC’s investors. The stock has taken a nosedive as the company’s legal woes over corruption charges has moved through the courts. If convicted, it wouldn’t be able to bid on government contracts for 10 years, so you can understand why investors are jittery from both a financial and an ethical perspective.

Many ethical investment portfolios have excluded SNC for years, as this isn’t the first time the company has been embroiled in controversy. Some, including Michael Sabia, the CEO of SNC’s largest shareholder (Quebec’s Caisse de dépôt), believe the markets may have hammered SNC a little harder than is fair and say the company is still a good investment. Another shareholder is seeking damages through a proposed class action lawsuit.

If you have had enough, there are alternatives.

WSP Global, a similar company to SNC-Lavalin, recently eclipsed it as the largest Canadian engineering and construction firm. It has a bigger focus on environmental services, like water infrastructure, public transit, and waste management. The Montreal-based firm has a stronger governance structure that seems to understand sustainability risks. It was also on Corporate Knights’ 2018 list of the Best 50 Corporate Citizens in Canada.

That said, WSP Global isn’t squeaky clean. It provides lots of engineering services to the oil and gas and mining sectors, and the paucity of taxes it has paid over the past five years suggests the possibility of creative accounting. However, there’s no question who wins the Sustainability Showdown when comparing it to SNC Lavalin.

Here’s how WSP and SNC measure up: 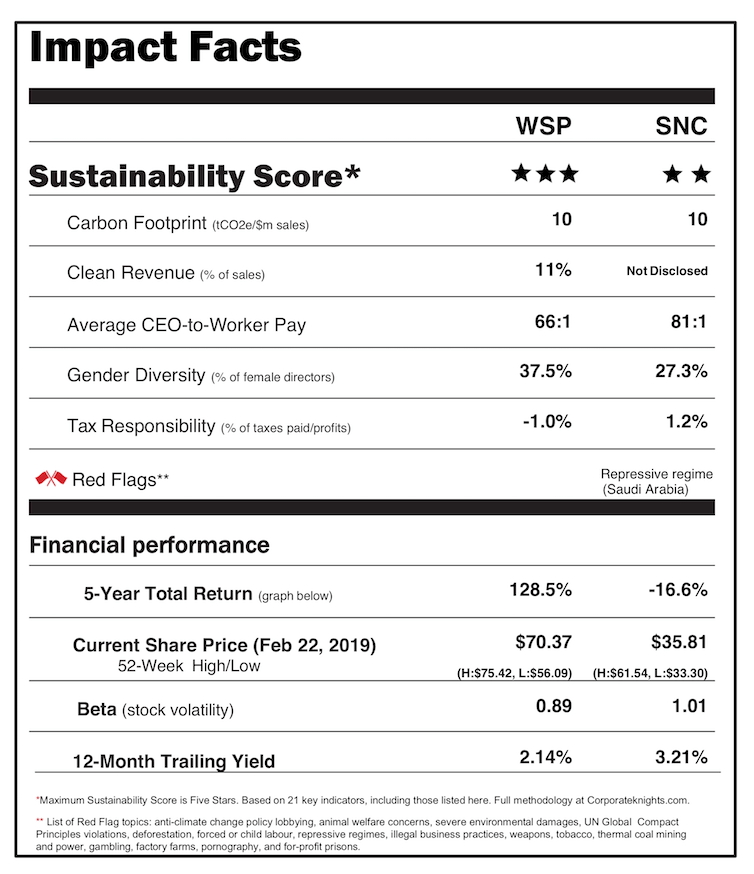 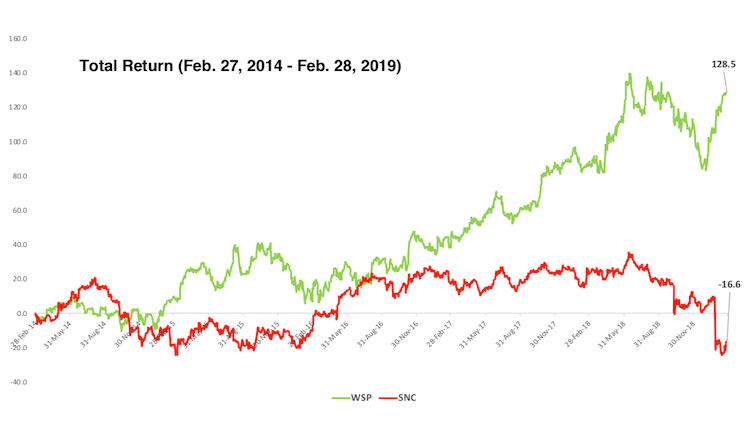 Tim Nash blogs as The Sustainable Economist and is the founder of Good Investing. He teaches people how to invest online and make intentional decisions with their investments. Twitter @timenash

Vast pools of private capital must be harnessed to finance the transition and Canada is lagging,

Is Big Food hiding the carbon footprint of your lunch?

Are mining companies hiding Indigenous opposition from their investors?

How can we sift through greenwashing to spot genuine climate action?