Canada’s biggest companies – those with annual revenues of more than $2 billion – are generally thought of as the best disclosers of sustainability performance, partly because they have the resources to properly track, compile and report metrics, such as carbon emissions, water consumption and management diversity.

It is this information that Corporate Knights’ annual Best 50 ranking counts on.

But many companies falling under that $2-billion threshold, as captured by our Future 40 Responsible Corporate Leaders in Canada ranking, are arguably taking sustainability disclosure just as seriously. More importantly, they’re showing a willingness to catch up to their larger peers.

For example, year-over-year disclosure across a number of metrics – specifically, energy use, GHG emissions, water consumption, and waste generated/recycled – has improved considerably for the 83 companies that formed this year’s Future 40 short listed.

Of this short list, 84 per cent disclosed energy consumption, versus 71 per cent a year earlier. An impressive 85 per cent reported GHG emissions, compared to 73 per cent in 2014. (If we zero in on just the Top 40 corporations, only two companies were found not to disclose GHG emissions this year, compared to seven last year.)

Waste and water indicators showed relatively lower disclosure rates, but still big year-over-year improvements. Nearly half – 48 per cent – disclosed water consumption, compared to 39 per cent the year before; and 51 per cent reported how much waste they generated, versus 44 per cent the year earlier. Within the waste category, reporting on waste recycling also improved – to 45 per cent from 34 per cent.

“One can only speculate on such impressive year-over-year improvements, but it’s likely that smaller companies are beginning to take their cues from Canada’s corporate giants,” said Michael Yow, director of research at Corporate Knights Capital. “The message is getting out that, at some point in time, this information will have to be disclosed. The leaders in this group are being proactive, and for some, it’s just the right thing to do.”

As the trend works its way down to smaller companies, it opens up more opportunities for socially responsible investors and their portfolios, Yow added.

Signi Schneider, vice-president of corporate social responsibility at Export Development Canada (EDC), which topped this year’s Top 40 ranking, said one of the best investments her organization made was assigning and training one person who thoroughly understood the disclosure requirements of the Global Reporting Initiative, which promotes global standards for sustainability reporting.

“It’s really pushed our level of disclosure,” said Schneider, suggesting that companies that don’t currently have a dedicated person give it some consideration. “It might not be as expensive as they think.”

For companies on the larger side, it’s not that significant of an investment to try to benchmark internal reporting to the GRI, she added. “It has been an excellent annual exercise for us. It forces you to have a conversation about who’s accountable for this information.”

The information that makes up the Future 40 is collected from publicly traded companies that disclose their environmental, social and governance data either through CSR/sustainability reports or some other publicly accessible medium. That data is aggregated by organizations such as Bloomberg. For non-publicly traded companies, we rely on reports identified by the GRI.

Corporate Knights considers the Future 40 as a kind of farm team that feeds future sustainability leaders into the big leagues of our Best 50 ranking. In this respect, the Future 40 offers us insights into how performance on the Best 50 might change over time.

Ultimately, our aim is to get small and medium-sized companies in Canada to start asking questions that will become increasingly important to their businesses as they grow: How do we use resources? How do we assure good governance? Are we treating employees and the communities in which we operate fairly and respectfully?

Answering these questions transparently, and reporting the data that supports those answers, isn’t just the future of sustainable business – it’s the future of business.

The difference between Corporate Knights’ Future 40 ranking and its Best 50 ranking has to do with the size of the companies represented. To be on the Best 50, companies need to have at least $2 billion in revenues. Under that, companies fall into the Future 40.

We decided this year to zero in on CEO pay relative to average worker pay. Is the gap, on average, larger in the Best 50 universe compared to the Future 40? Some industry groups simply don’t disclose this information. However, we were able to draw comparisons between six industry groups that met our disclosure threshold: energy, financials, industrials, materials, telecom services and utilities.

As you’ll see below, CEOs of big companies on average make substantially more than their smaller peers, when measured against average worker pay. Shocking? No surprise? Visit Facebook.com/corporateknights and tell us what you think. 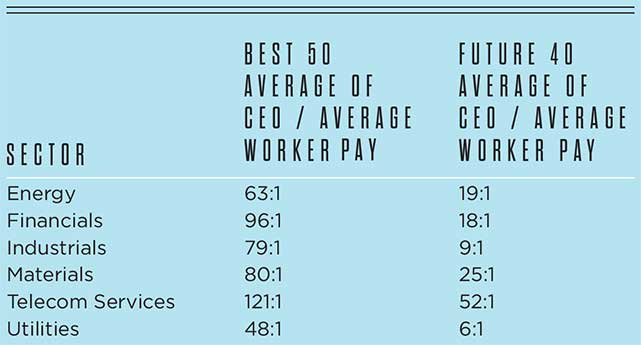 — Click here to go back to the ranking landing page.

When Export Development Canada (EDC) signed on to the Equator Principles in 2007, the world of

2015 methodology: To establish the Future 40 shortlist, the research team identified all Canadian companies with