Humanity is faced with a list of daunting challenges. The impacts of climate change and escalating resource scarcity are creating a series of increasingly unpredictable repercussions, from widespread forest fires in North America and Australia to increasing water shortages in the Middle East. Everyone from the U.S. military to Pope Francis is sounding the proverbial alarm, including a growing segment of the business community at large.

Any successful transition to a low-carbon economy will be arduous and disruptive, a journey that is likely to produce a long line of both winners and losers. The business community is itself poised to go through a period of dramatic transformation. Those best equipped to embrace this cleaner form of capitalism will be able to harness private sector capital and ingenuity to succeed under this new paradigm.

While there are many business rankings that focus on how they can help graduates make more money, The Better World MBA Ranking aims to identify which MBAs best prepare graduates to change the world for the better and succeed in this shifting business climate. As the march to a more inclusive, socially, and ecologically just form of capitalism gathers steam, it is our hope that these new graduates will not only produce the highest returns for society and the planet, but they will also be handsomely rewarded by the market for doing so.

How to measure the “better world” component of an MBA has proven to be an inexact science. After more than a decade of running MBA rankings on the topic, we have learned three important lessons regarding our methodology.

• Provide a clear vision on the goal of the ranking.
• Keep it simple, transparent, and objective.
• Do not make the ranking dependent on schools having to fill out yet another survey. 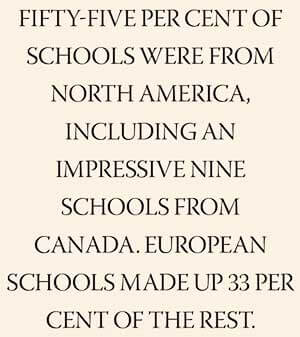 The research focus is now oriented around which MBA programs offer the best package of core courses, research and support centres to foster the most comprehensive sustainability-oriented learning experience. These numbers were only taken from publicly available sources.

The Schulich School of Business at York University was the top-ranked program this year, continuing a 12-year reign on top of our rankings. It earned a high grade in all three evaluated categories with a final score of 88 per cent, including a heavy sustainability research focus among the faculty at large.

That was followed by the Desautels Faculty of Management at McGill University, a program that has successfully reorganized itself in recent years around the more holistic concept of “integrated management.”

The Copenhagen Business School rounded out the top three, after finishing 10th in our 2013 ranking. It supports an impressive ecosystem of institutes and centres, including a sustainability-oriented Center for Leisure and Culture Services and a CSR-focused Centre for Business and Development Studies. It is also home to 180 Degrees Consulting, the world’s largest university-based consultancy dedicated to improving the effectiveness of non-profits and social enterprises around the world.

Several notable regional trends did emerge when examining the Top 40 Better World MBA programs. Fifty-five per cent of the schools were from North America, including an impressive nine schools from Canada. European schools made up 33 per cent of the remainder, followed by a handful of schools from Asia, Africa and Australia.

Future business leaders will be tasked with integrating social and environmental factors into their everyday business decisions, whether it’s how to do full cost accounting, build inclusive leadership and governance structures or practice ethical marketing.

MBA programs have a long way to go, but these top schools are – compared to their peers – tops at teaching corporate leaders of tomorrow how to hit the ground running.