The whole world has been talking about Boeing ever since a second 737 Max 8 plane crashed in Ethiopia on March 10th leading to the tragic death of all 157 passengers and crew. The first crash killed 189 people in Indonesia last October. Since both crashes occurred in a suspiciously similar manner, governments around the world responded by grounding Boeing’s Max 8 planes until they figure out what went wrong. Not surprisingly, the stock quickly fell by 15%, and investors are obviously a little jittery about the company facing a criminal probe.

Boeing has long been a no-go for ethical investors since the Chicago-headquartered corporation builds all kinds of military fighters and controversial weapons, including nuclear bombs. As a result, they are already screened out from most responsible funds, including the trillion-dollar Norwegian Sovereign Wealth Fund. In addition to being a weapons manufacturer (or perhaps due to it), Boeing has never taken sustainability particularly seriously. They churn out an annual Environment Report, but it lacks meaningful data and ignores most social and governance issues.

Before the crashes, Boeing’s stock had performed really well in the last two years. Demand for airplanes is climbing, and Boeing has a backlog of 5,900 orders – enough to keep production busy for the next seven years. My questions are: 1) will customers cancel their orders if travellers refuse to fly on Boeing planes? and 2) what are the long-term prospects for air travel if we take climate change seriously?

With these concerns and more, it’s time to consider replacing Boeing in your portfolio.

Have you heard of Siemens? It’s a giant German conglomerate that manufacturers a huge range of products across sectors like energy, building technologies, and mobility. They score higher than Boeing on every single sustainability measure on our scoreboard, and were #28 on Corporate Knights’ 2018 Global 100 Most Sustainable Corporations in the World list. The company has a comprehensive sustainability strategy, with ambitious targets like full carbon neutrality by 2030.

Siemens does work a little bit in the aviation business, but more on things like product design and production engineering rather than full-on airplane manufacturing. They’re much more diversified than Boeing, with clean revenue from areas like renewable energy and electric trains. Just a few months back, Via Rail chose Siemens over Bombardier for a $989-million train contract.

Admittedly, Siemens’ stock hasn’t performed as well as Boeing’s over the last two years, but with a higher dividend, a lower beta, and clear sustainability leadership I’m confident that Siemens will be a better stock to own for the coming decades. 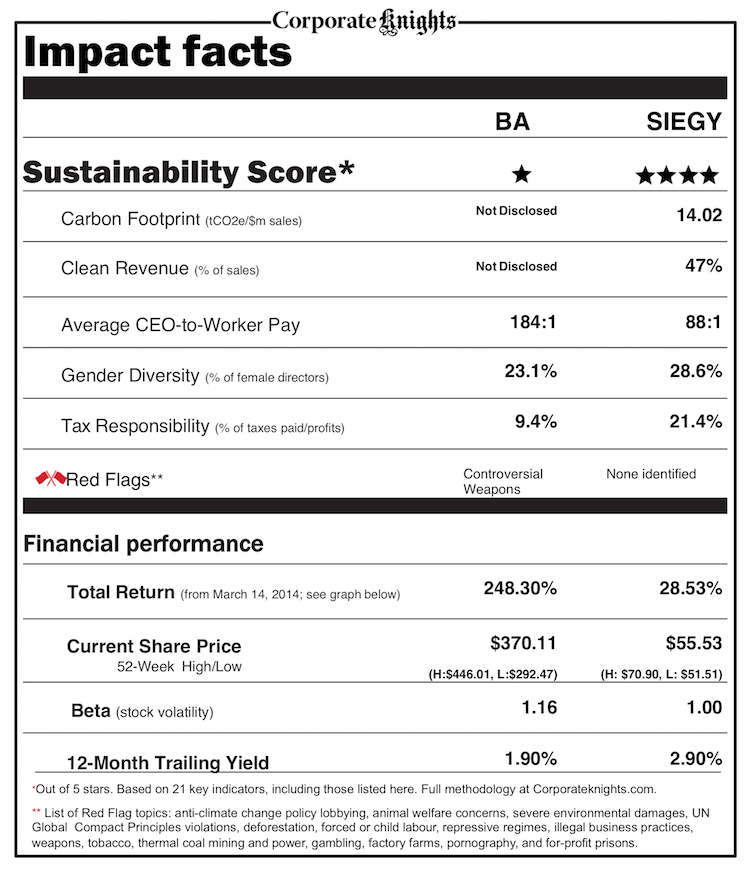 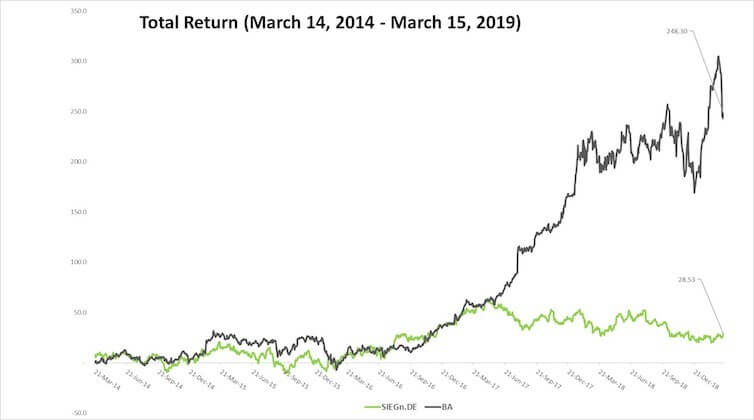