On January 1, 2019, Jair Bolsonaro began his tenure as the president of Brazil. In Bolsonaro’s first eight months in office, his administration has had a profound impact on Brazil’s forests and its Indigenous population, and critics now link Bolsonaro’s anti-environment policies and rhetoric with the wildfires affecting Brazil’s Amazon rainforest. But Bolsonaro is not the only one fuelling the fire as agro-businesses expand into forested regions, driven by global demand for Brazilian commodities. Consumer goods like beef and soy are largely to blame for the need to clear land. Thus, food producers sourcing ingredients in Brazil, financial industries and trading governments all have a role in addressing deforestation and human rights issues in Brazil.

Less than a year in power, Bolsonaro’s impact on the environment and Indigenous peoples has been far-reaching. Deforestation levels in Brazil between July 1 and 22 of this year alone were 111% higher than they were in all of 2018. Over 120 pesticides were authorized in 2019 to date, some of which have been classified by the U.S. Environmental Protection Agency as “dangerous” or “extremely dangerous” for humans and the environment. All this occurred under the auspices of the Brazilian Ministry of Agriculture, whose powers have increased at the expense of the Ministry of Environment. The MoE and its anti-deforestation agency, Ibama, have suffered drastic budget cuts since Bolsonaro came into power, lessening their ability to identify and penalize instances of illegal deforestation. The new Minister of Environment, Ricardo Salles, dismissed environmental fines as ‘ideological’, leading civil servants in the Ministry to distance themselves from the minister in an open letter in April.

The Bolsonaro administration has also proposed transferring the protection of Indigenous rights to the Ministry of Agriculture again after congress voted against the initial proposal. Because of his strong ties to Brazil’s agribusiness, many are concerned the Minister of Agriculture will further subordinate Indigenous land rights to agricultural industry interests. During his campaign, Bolsonaro swore “to not demarcate another centimetre of Indigenous land” for protected status. Roughly 12% of Brazil’s lands are Indigenous lands, spread over 700 territories, of which about a third is waiting for official recognition. 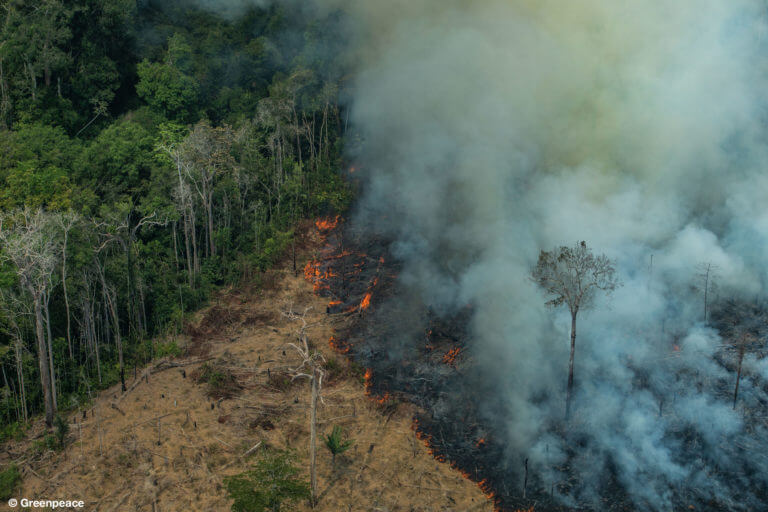 Bolsanaro’s reputation as “the most environmentally dangerous head of state in the world,” as The Economist recently put it, doesn’t just affect Brazil’s forests and Indigenous communities. International firms will want to keep a watchful eye on exactly how they’re doing business in Brazil. The Brazilian beef and soy industry has been singled out for fuelling many of the roughly 26,000 fires recorded in the Amazon this month, as land is typically cleared by farmers and ranchers to grow crops and raise cattle. Brazil is the largest beef exporter in the world with around 25% of the global beef market. In the last year, it has also surpassed the U,S. as the world’s largest exporter of soy (much of that soy is used as animal feed). As well, global demand for Brazil’s timber exports is contributing to the deforestation. Chances are high that firms taking advantage of less rigorous regulations may be doing so on disputed or demarcated Indigenous territories.

Despite Brazil’s regulatory rollbacks, countries and companies importing from Brazil have their own commitments on deforestation and human rights to uphold. Given the misalignment of these commitments with Brazil’s policies and practices, continuing to buy commodities from Brazil could prove to be contentious and pose reputational risks. In May 2019, several UK food retailers were named and shamed in the media for continuing to purchase products from Brazil’s JBS (the world’s largest meat processing company) despite the fact that investigations found the company was sourcing cattle from illegally deforested areas in the Amazon.

Over 50 of the world’s biggest companies (including Cargill, McDonald’s, Walmart, and Lloyds Banking Group) have pledged to halve deforestation in their supply chains by 2020 under the 2014 New York Declaration on Forests. This after a 2010 alliance on deforestation driven by the Consumer Goods Forum (CGF) saw 400 international companies pledge to zero net deforestation supply chains for palm oil, soy, beef and pulp and paper by 2020. American agri-giant Cargill, one of the largest exporters of Brazilian soy, has been heavily criticized for recently announcing that it would not meet its 2010 pledge. It’s also facing a backlash for backtracking on its commitment to a soy moratorium in Brazil’s Cerrado region – known as the world’s most biodiverse savanna.

Being implicated in the deforestation of Brazil’s traditional Indigenous lands could also put companies at odds with their public commitments on human rights, which are aligned with the interests of the UN’s Office of the High Commissioner for Human Rights (OHCHR). The 2007 UN Declaration on the Rights of Indigenous Peoples was seen as a landmark development for the OHCHR. Providing mechanisms for Indigenous peoples to provide free, prior, and informed consent for projects in the Brazilian Amazon may be a way forward for companies looking to ease current tensions. In April, an Ecuadorian court suspended government plans to auction off Indigenous Waorani territories for oil exploration stating that the government didn’t receive the tribe’s consent.

Role of the Financial Sector

Multinational corporations aren’t alone in their exposure to Brazil’s Amazon and Cerrado. Banks play a central role as an intermediary between the financial markets and the consumer goods sector, including food and agricultural companies. Boycotts of Brazilian beef and byproducts overseas could lead to longer loan payback terms and negatively impact banks’ credit portfolios. Similarly, if improvements to environmental standards take priority in EU-Mercosur trade negotiations, banks operating within Brazil will be under increased exposure to ESG integration against financials risks.

Sustainalytics looked at the financing policies of 13 of the biggest domestic and foreign banks in Brazil by assets (10 domestic, 3 foreign).  Only three of the Brazilian banks (Banco do Brasil, Caixa Econômica Federal, and Itaú Unibanco Holding S.A.) have general environmental and social guidelines that mention or address deforestation, Indigenous peoples or cattle ranching practices. Notably, none of the banks in our research sample has a standalone policy addressing Indigenous peoples and rights. The three foreign banks (Barclays PLC, BNP Paribas SA, and JPMorgan Chase & Co.) had policies addressing deforestation and soft commodities (i.e., cattle ranching, timber products, soy, etc.).

In the absence of stronger environmental protections from the Brazilian government, bank financing policies can be influential in ensuring borrowers respect international norms and standards. Poor or non-existent policies can exacerbate the deforestation practices fueling Brazil’s fires.  Domestic and foreign banks operating within Brazil can manage their exposure to reputational and other ESG risks by establishing or improving social and environmental lending policies for sensitive sectors like agriculture and soft commodities.

For instance, French international banking group BNP Paribas encourages its agricultural commodities producers to have their crops or plantations certified against Round Table on Responsible Soy, Better Cotton Initiative, Bonsucro or UTZ principles and standards by 2020. It encourages cattle farmers to have their production systems certified by 2020 against the Standards for Sustainable Cattle Production Systems by the Sustainable Agriculture Network.

Banks could also work with NGOs that monitor the environmental and social impacts of deforestation and set up ESG funds that exclude poor performers with respect to deforestation practices. They could also introduce or bolster requirements for consultation with Indigenous Peoples. 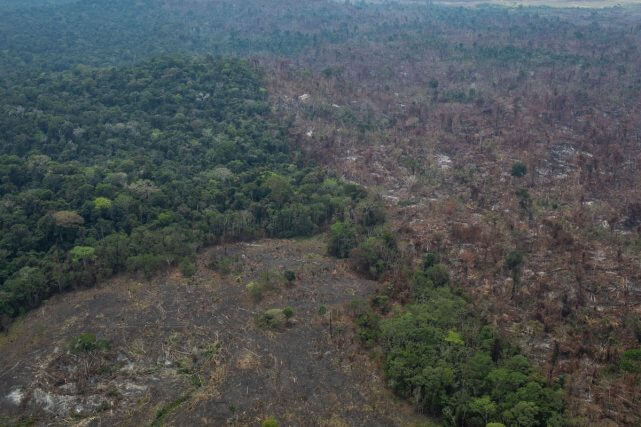 Call for a regulatory crackdown by Europe

While the EU has enforced legislation on illegal timber, illegal fishing and conflict minerals, there is no regulation on agricultural goods linked to deforestation. As a major trading bloc and a significant consumer of agricultural products associated with global deforestation, the EU holds some responsibility and has an opportunity to drive change and set best practice standards.

The European Commission has received numerous requests from academics and stakeholder initiatives, such as the Amsterdam Declaration, calling for regulations requiring proof that goods placed in the EU market don’t contribute to either global deforestation or human rights abuses. A 2017 motion by the European Parliament called for regulation of the EU’s footprint on the world’s forests and highlighted the need for effective protection of Indigenous peoples rights and forest-dependent communities.

We all have a role in making sure Brazil’s rainforest is safeguarded well into the future. Governments can regulate beef, soy, timber and other imports linked to deforestation. The financial sector can leverage its role and influence companies to reduce deforestation and improve relationships with Indigenous peoples. It’s also incumbent on the consumer goods industry to uphold its voluntary commitments in the face of weakened regulations and protections. Much will depend on the willingness of the actors involved, be they cattle farmers, multinationals, consumers, banks or investors, to recognize the power they hold, and to act on it.

Jean-François Obregón is a Senior Associate, Insurance, Real Estate and Asset Management Research at Sustainalytics and based in Toronto.

Jessica Grant is an Associate, Consumer Goods Research at Sustainalytics and based in Amsterdam.

Thijs Huurdeman is an Associate, Consumer Goods Research at Sustainalytics and based in Amsterdam.

A version of this story first appeared on Sustainalytics.com.