The COVID-19 pandemic has had a swift and profound effect on the automotive industry, but early signs point to the electric vehicle category weathering the storm on firm footing. While work-from-home orders and extended assembly-plant closures have caused some product delays and cancellations, relatively few of those have been EV projects. Stringent emissions requirements are holding firm in China and Europe, and sales targets remain in place closer to home: Canada is just one of the nations aiming to have 10% of new-vehicle sales be zero-emission vehicles by 2025 and 100% by 2040. These pressures are thus far focusing automaker attention firmly on advancing EV technology and its adoption.

Longer-range capabilities and the new federal incentive program, iZEV, are combining to make battery electric vehicles a more appealing and attainable option than ever. But if you’re looking for even more motivation to choose an EV, consider the lower total cost of ownership.

EVs don’t have oil to change or sparkplugs to replace, and that means fewer trips to the shop. According to current estimates, EV owners can expect to spend roughly a third less on maintenance over the life of their vehicles as compared to their internal combustion engine (ICE) equivalents.

Add in the fuel savings and the differences can be stark. Here, we’ve analyzed the popular Nissan Qashqai subcompact crossover against a similarly sized battery electric, the Kia Niro EV, and we’ve compared the Mercedes-Benz C-Class Sedan to the Tesla Model 3. As was the case when Corporate Knights conducted faceoffs with the Nissan Leaf, Chevy Bolt and Hyundai Kona Electric, the numbers show the benefits of choosing electrons over emissions.

Here’s an explanation of the figures we’ve used in this analysis:

• As of this writing, fuel prices are at historic lows due to the market forces at play during the COVID-19 pandemic. However, these prices are not expected to last. Since we’re assuming a 10-year period of ownership in our estimates, and prices over the past 10 years have swung anywhere from the current $0.75 to as much as $1.50 per litre in some markets, we’ve chosen a median average per-litre (L) cost of $1.25, understanding that this is the most volatile variable. For power rates, we’ve used a figure of $0.10 per kilowatt-hour (kWh). The published range and efficiency figures are as rated for each model by Natural Resources Canada (NRCan), (population-weighted average electricity bill per province, including taxes, assuming majority of charging occurs during off-peak hours).
• We’ve assumed the EV buyer would be a new owner, so we’ve factored in the purchase and installation cost for a Level 2 charger, using the total cost for a FLO Home unit of $1,745.
• We’ve made our calculations using the national average Canadian sales tax of 11.075%. 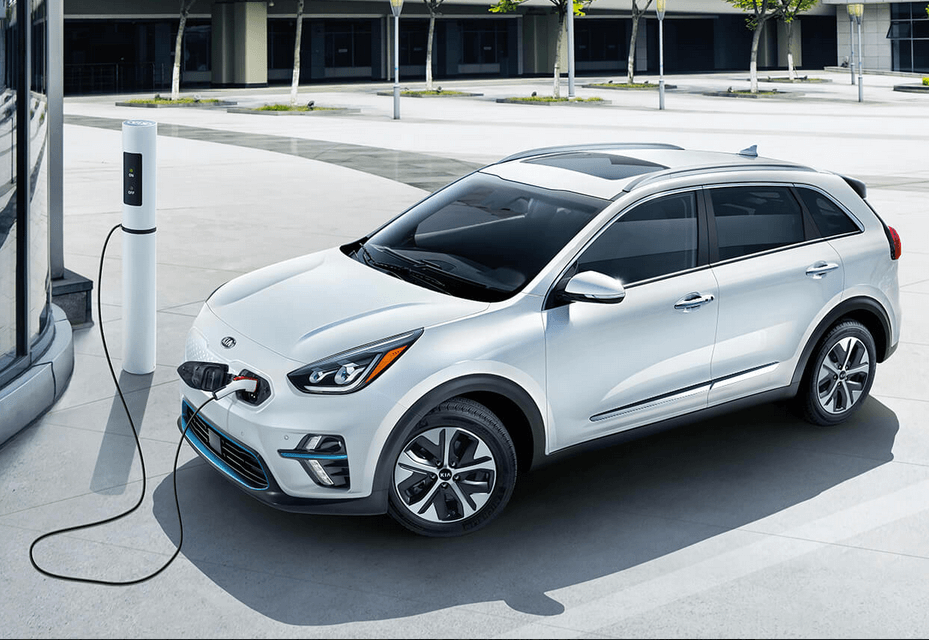 Crossovers have become wildly popular with Canadians, and several EVs sporting this body style have hit the market to compete with mainstream equivalents.

One is the Kia Niro EV, the battery electric version of this subcompact crossover, which is also available in ICE and plug-in hybrid variants. The EV has an impressive 385-kilometre (km) range and comes in two models, or trims; here we examine the SX Touring trim, which is more expensive, at a manufacturer’s suggested retail price (MSRP) of $54,995 and a total cost of $55,929 with fees. Since the base model is priced under $50,000, this trim also qualifies for the iZEV program, and yet it adds features owners won’t want to live without, such as a heated steering wheel, front and rear heated seats, and a heat pump, which not only make it more suited to Canadian life but also make in-cabin comfort significantly more efficient (heated seats use less energy than cabin heaters and therefore less electricity, increasing the EV’s range). NRCan doesn’t account for these differences in efficiency in its ratings, which show the Niro EV averaging a combined 18.6 kWh/100 km.

Nissan’s subcompact Qashqai is a popular player in this growing segment. The SL Platinum grade carries an MSRP of $34,133 – slightly higher than advertised because there are no zero-cost paint colours – and a total of $36,213 with fees. This model matches the Niro EV SX Touring closely in features but offers one significant difference: it comes with all-wheel drive (AWD), which is desirable in winter driving and on imperfect roads but drives up its fuel use. According to NRCan, a Qashqai AWD averages 8.4 L/100 km combined, as opposed to the 8.2 L/100 km average seen in front-wheel-drive models.

We calculated based on both vehicles needing to be financed in full, less a $1,000 deposit, and used a 2.9% interest rate over a 72-month term, which are common numbers for each of these vehicles.
After running these through our estimator using the assumptions outlined above, the Niro EV ends its 10 years of ownership with a total cost of $86,264.50, which is $833.72 less than the Qashqai’s $87,098.21 – and all while producing 45.3 tonnes less in CO2 emissions over its life. 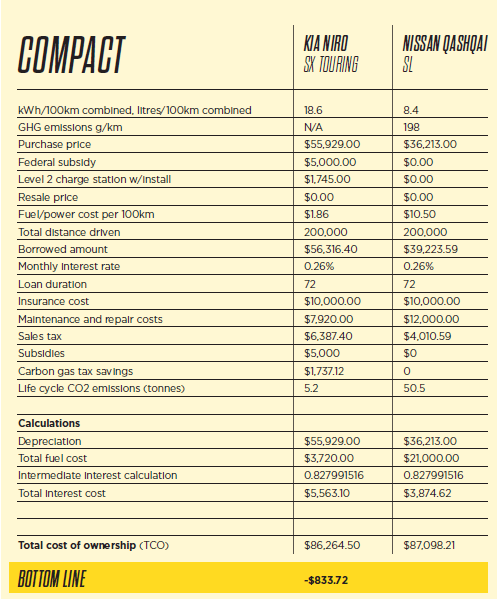 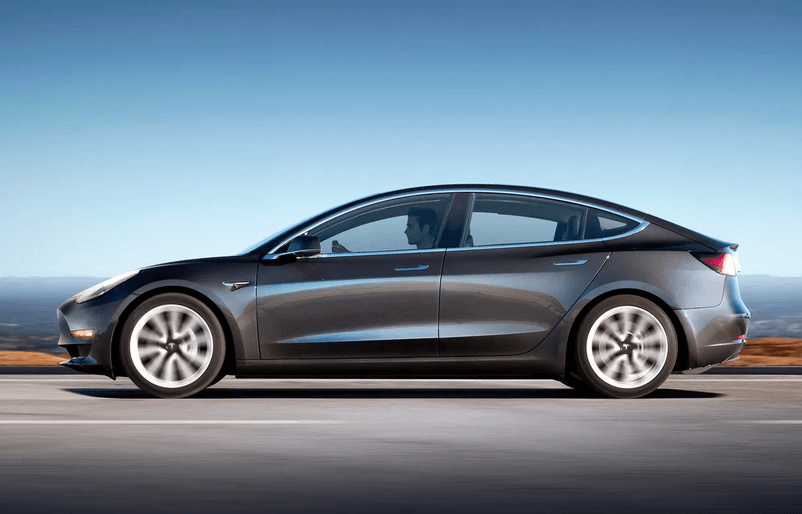 To look at this comparison fairly, we need to assess the Tesla Model 3 against the only four-door, non-performance variant of the Mercedes-Benz C-Class sold in Canada: the C-Class 300 4MATIC (AWD). This model has an MSRP of $46,400 and costs $48,575 after fees, and has a combined fuel efficiency rating of 9.4 L/100 km.

Longer-range models are available, and a lower-cost, “million-mile” battery has been announced that will debut in the Model 3 in China late this year or early next. For now, we presume for the purposes of this comparison that the buyer wants a Model 3 variant that qualifies for the iZEV program, making the best match the Standard Range Plus. This strikes a good balance between price and capability, with an estimated range of 402 km and an advertised price of $55,990, which includes destination charges and delivery fees. However, it comes equipped as rear-wheel drive only; to get the two-motor, AWD version, it’s necessary to pay $10,000 more for the Long Range model and give up the rebate, for a total hit of $15,000. The trade-off is in efficiency, which in the Standard Range Plus model is the best in the Model 3 lineup, at 14.9 kWh/100 km combined. This variant has heated 12-way front seats and includes the autopilot feature, but it doesn’t come equipped with self-driving features like autopark and summon, which are available only as a post-delivery, added-cost option.

We’ve also factored in a deposit of $5,000 since luxury brands typically request a down payment of 10%. In preparing this comparison, we found different interest rates on offer: Mercedes-Benz advertises a rate as low as 1.9% on the C-Class for qualified buyers, while Tesla’s website shows 4.6%. 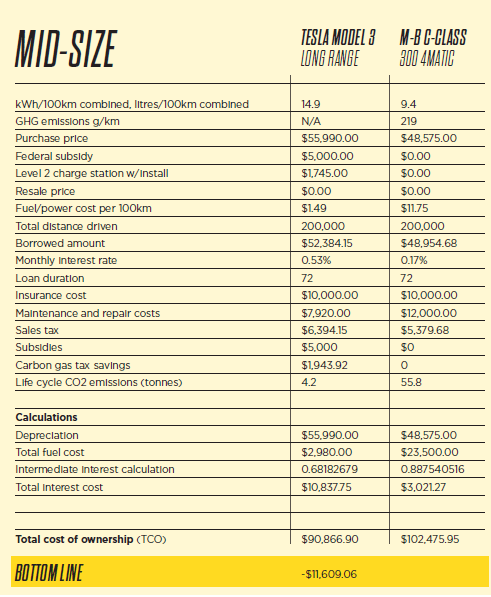 According to a study cited recently by incoming Honda Canada president Jean Marc Leclerc, Canadians are currently willing to spend up to $700 more to buy EVs, which doesn’t cover the difference in production cost. Would more effective communication of the total cost of ownership, which clearly demonstrates savings of much more than $700 over the long-term, help car buyers mentally bridge the gap and tolerate higher up-front vehicle prices? Perhaps incorporating these figures into window stickers and engaging in education programs would help push electric vehicles into the consciousness of everyday consumers and bring this technology into the mainstream.

Healthy, carbon-free, easy to park, the humble bicycle has become one of the few winners in

As the dust settles on the pandemic crisis, the smart money will increasingly focus on green

In 2018, a €40 million ($61 million) gift marked one of the largest sustainability-linked donations to