This article originally appeared in Fortune.

Like rooftop solar—now one of America’s fastest growing industries—electric cars are poised to hit their tipping point. As we’ve seen with other clean energy technologies, each product generation brings rapid improvement. Starting this fall, the second generation of electric cars will be arriving at showrooms —starting with the Tesla Model X and Chevy Volt – offering greater range and more model choices.

As with renewable energy, taking the electric vehicle market to the next level will require big investments in creating a robust network of public charging stations and creating new business models to make such investments worth it.

It has been widely recognized that the lack of publicly available charging infrastructure – including at workplaces and apartment buildings —is a key barrier to mass adoption of electric vehicles. The infrastructure gap is in large part a “financing gap.” As a recent National Academies of Science study on electric vehicle barriers confirms, it is hard to identify any standalone private sector entities that have an “attractive business case for absorbing the full capital costs of investments in public charging infrastructure. 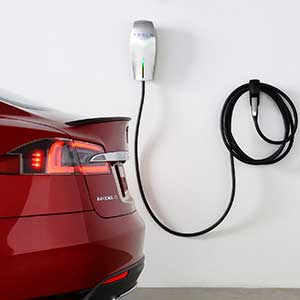 Utility companies are in the unique position to finance charging stations because they can capture the grid-wide benefits of large-scale electrification, especially the benefit of greater utilization of fixed assets. However, the conundrum for owners of charging stations is that while a safety net of more stations is needed to drive sales and further reliance of cars using electricity for their fuel, the vast majority of the charging is still likely to happen at home. By creating incentives for home charging to happen duringoff peak hours, utility companies can generaterevenues that exceed their cost of service, even with time-of-use rates.This is because the distribution system and other fixed assets are sized to meet peak loads and thus are underutilized during off-peak hours.

The problem is how to build EV load, and to do such you need a “safety net” to reduce “range anxiety” which then drives adoption, but because the network is more of a safety net, it will not be the primary location to charge, versus at home. So a network drives EV adoption and load, which then predominately occurs off peak which allows utility to increase their capacity utilization rates of fixed assets, which then allows them to collect more net revenues.

This creates a rare “win-win” situation where electric vehicle drivers, utilities and all utility customers can benefit from increased investments in electrification. A recent California study estimated that utility companies could earn $2.26 to $8.11 billion in net revenues from large-scale commercialization of EVs. This is sufficient to allow utilities to invest both in installing charging infrastructure and return some of the revenues to their customers in the form of lower rates.

The value of having a flexible load on the grid will grow even further with higher amounts of wind and solar. Electric vehicles can be programmed to charge during peak solar or wind generation periods, preventing this valuable electricity from being wasted. In the future, electric vehicles could increase their value by putting electricity back into the grid as well (commonly known as “Vehicle-to-Grid” or V2G).

California is leading the way. The three largest utilities – Pacific Gas & Electric, Southern California Edison, and San Diego Gas & Electric – are seeking to invest $1.1 billion in infrastructure deployment to support 60,000 publicly available charging ports. In comparison, the federal government as part of the American Recovery and Reinvestment Act of 2009 stimulus packageappropriated about $400 million for the nation to help install infrastructure stations. Other utilities across the country are also moving forward with installing charging stations, including Southern Company and Kansas City Power and Light.

While there is legitimate debate as to whether utilities should go as far as owning and operating recharge stations, there is broad agreement among stakeholders — including charging companies, utilities, automakers, and NGOs — that utilities should expand their investments in publicly available infrastructure, as evidenced by a recent decision at the California Public Utilities Commission. By partnering with charging companies and automakers, utility companies have the opportunity to make the most effective use of their investments.

The future low carbon economy will critically depend on replacing coal, oil and natural gas with zero carbon energy. Charging electric vehicles on renewable electricity is a key strategy for achieving deep reductions in carbon pollution. Utility investments in charging infrastructure, partnered with charging companies EV manufacturers and renewable energy providers, offer a rare win-win-win opportunity to accelerate this vision. More broadly, the utilities have a critical role to play through the infrastructure investment, including software and other systems needed to integrate EVs, storage, and customer demand solutions with intermittent renewable energy production . Together, these new collaborative business models offer tremendous promise to address climate change while driving innovation and better grid utilization.

Nancy E. Pfund is founder and managing partner of DBL Partners, a San Francisco-based venture capital firm. DBL owns SolarCity, which was an early investor of Tesla. Pfund sits on the board of directors of SolarCity.

Just four years after launching a pilot plant in Canada, Li-Cycle has raised US$500 million from

EV Faceoff: Find out how Ford's new electric pickup truck compares to its gas-guzzling counterpart on

Report: Automakers need to walk the talk on EVs