There seems no end to our growing appetite for plastic. Global production was up 3.9 per cent in 2013 and demand continues to grow, according to a report from the Worldwatch Institute.

In all, 299 million tons of plastic were produced in 2013. As a product derived mostly from fossil fuels, about 4 per cent of the world’s petroleum is used to make plastic annually, and another 4 per cent goes into powering the process used to manufacture it. 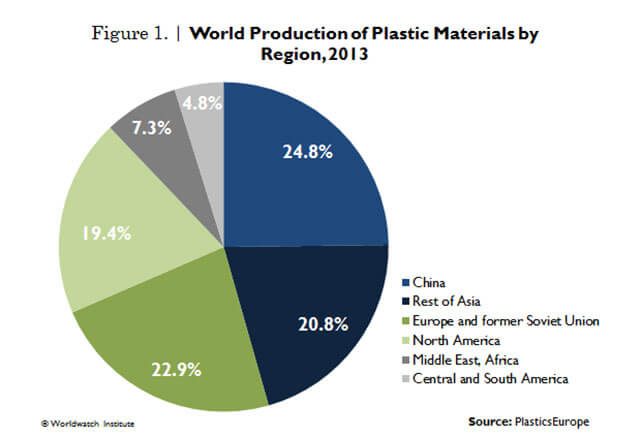 Market growth averaged 8.7 per cent a year between 1950 and 2012. Since the 1970s, demand has been driven by the increased use of plastic as a low-cost alternative to glass, metal and, more recently, paper packaging.

“With the push by U.S. federal mileage standards to reduce the weight of vehicles, the American automobile industry has been a champion of this transition too,” according to Worldwatch. “Plastics make up about 10 per cent by weight (50 percent by volume) of a typical U.S. vehicle today, representing 336 pounds of plastic per vehicle.”

Growth in paper production, meanwhile, has leveled off, according to the U.N. Food and Agriculture Organization. Nearly 400 million tons of paper and paperboard were produced worldwide in 2013, the second year in a row it has seen a slight decline after reaching an all-time high of 400.6 million tons in 2011.

But don’t attribute the flattening of demand to competition from plastic. Paper packaging production continues to rise. What’s falling dramatically is newsprint production, which once accounted for a quarter of the market but today is closer to 7 per cent.

Diet transformation would free up an area larger than the European Union, says new study

Animal agriculture is both a major contributor to the climate crisis and a victim of it.

Big Meat has been dabbling in the plant protein market. So why is the sector undermining

Beyond wars and pandemics, the climate crisis is the greatest risk to food supply chains

Solutions exist to reduce emissions and increase sequestration in agriculture, if more companies step up to

When it comes to food production, ‘Does it scale?’ is often the wrong question