Few companies in the world draw as much ire from environmentalists as Monsanto. But few people know that it was acquired by German aspirin-maker (and chemical giant) Bayer last year. Bayer quietly dropped the brand name, so I’ve seen many clients who own shares of Bayer not knowing that they also own Monsanto. (Many didn’t realize that Bayer was a major chemical pesticide manufacturer and genetically-modified seed maker well before it bought Monsanto). Although Bayer dropped the contentious Monsanto name, it retained Monsanto’s lawsuits – including an $80 million court case it lost on March 27.

Bayer stocks had already started plummeting a week prior, when a U.S. court ruled that Monsanto’s notorious glyphosate-based Roundup herbicide had caused 70-year-old Edwin Hardeman’s non-Hodgkin’s lymphoma. There are another 1,600 glyphosate cancer lawsuits waiting to be heard in Northern California alone, largely by the farmers and groundskeepers that used it for decades.

Monsanto’s no stranger to the courts. The chemical company was a major target of lawsuits in the late 1970s and 1980s stemming from its use of Agent Orange during the Vietnam War.

The first big Roundup verdict came through last August when the Superior Court of California ruled in favour of Dewayne Johnson, a former school groundskeeper who also developed non-Hodgkin lymphoma. The $78 million verdict is under appeal, but investors are already spooked. As they should be. Shares of Bayer are down 42% since the Monsanto purchase was finalized in June 2018, and investors are questioning the wisdom of that acquisition. It should come as no surprise that investors are looking for alternatives.

Chr. Hansen is a Danish bioscience company in the agriculture/food industry that feels like the complete opposite of Monsanto and Bayer. Rather than producing chemical pesticides, the Danish innovator uses “good bacteria” to provide natural solutions for livestock and crop protection and prolonging the shelf life of foods such as yogurt and cheese.

I first learned about Chr. Hansen because it’s the top holding in The Organics ETF (ORG) that gives investors exposure to the growing organic food market.

The more I learn about Chr. Hansen, the more I love it. They’ve set specific targets connected to the UN’s Sustainable Development Goals and 82% of their products are already contributing to those targets. It was no surprise to me when they were named #1 on the 2018 Corporate Knights’ Most Sustainable Companies in the World list.

Investors have also been impressed with Chr. Hansen’s share price growing spectacularly while remaining very stable with a low beta. One could argue that Chr. Hansen is currently over-valued, but I expect them to continue growing their business as food manufacturers and consumers keep demanding healthier, natural alternatives.

If owning shares of Bayer is giving you a headache that just can’t be cured, consider ditching them for shares in Chr. Hansen who is the clear winner of this week’s Sustainable Stock Showdown. 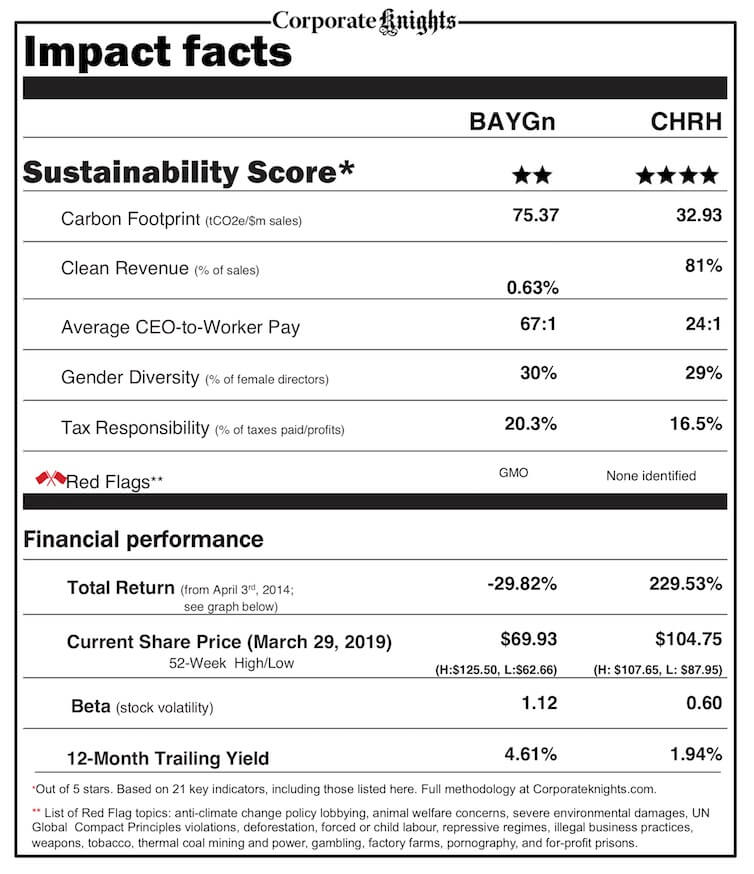 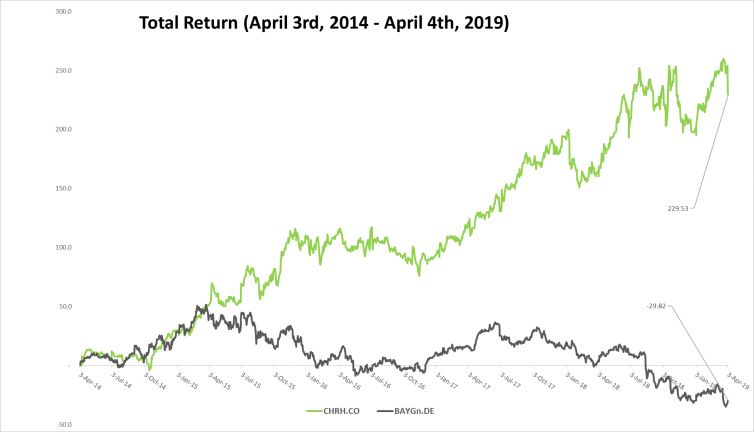 The chicken industry says its meat is better for the planet than beef, but efficiency claims